"Seeing Is Believing" Is Not True Faith in God

The Bible recorded such an incident: When the Lord Jesus was resurrected three days after being crucified, He appeared to His disciples. At that time, some of the disciples saw Him, but Thomas didn’t. He said, “Except I shall see in his hands the print of the nails, and put my finger into the print of the nails, and thrust my hand into his side, I will not believe” (John 20:25). Later, the Lord Jesus appeared to all His disciples, and Thomas was with them. The Lord Jesus said to him, “Reach here your finger, and behold my hands; and reach here your hand, and thrust it into my side: and be not faithless, but believing.” When Thomas saw the Lord was really resurrected, he knelt down and said, “My Lord and my God.” However, the Lord Jesus said: “because you have seen me, you have believed: blessed are they that have not seen, and yet have believed” (John 20:27–29). Thomas was one of the twelve disciples and followed the Lord Jesus all the time when He preached and worked. He saw the Lord preached in all places and taught people, and saw the Lord performed many signs and wonders, such as, healing the person who was born blind, feeding five thousand with five loaves of bread and two fish, raising the dead, calming the wind and waves, and so on. But why did he still doubt the Lord’s identity? This problem has been puzzling me for a long time. I sought many pastors and elders for that, but none of them could explain it clearly. 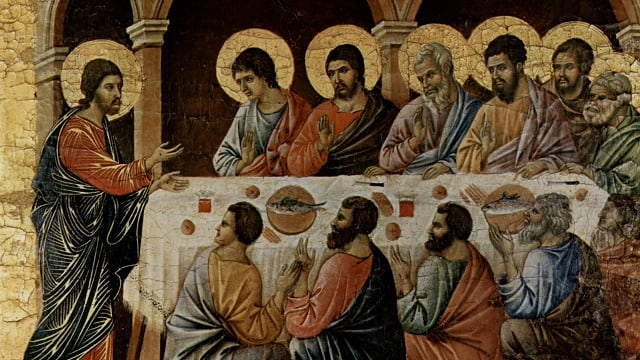 On one occasion, from a book my friend gave to me, I saw the following passage of words: “Before the Lord Jesus was nailed to the cross, Thomas always doubted that He is Christ, and could not believe it. His belief in God was established only on the basis of what he could see with his own eyes, what he could touch with his own hands. The Lord Jesus had a good understanding of the faith of this type of person. They only believed in God in heaven, and did not believe at all, and would not accept the One sent by God, or the Christ in the flesh. In order to have him acknowledge and believe in the existence of the Lord Jesus and that He truly was God incarnate, He allowed Thomas to reach out his hand and touch His rib. Was Thomas’ doubting any different before and after the Lord Jesus’ resurrection? He was always doubting, and aside from the Lord Jesus’ spiritual body personally appearing to him and allowing Thomas to touch the nail marks on His body, no one could resolve his doubts, and no one could make him let go of them. So, from the time the Lord Jesus allowed him to touch His rib and let him really feel the existence of the nail marks, Thomas’ doubt disappeared, and he truly knew that the Lord Jesus had been resurrected and he acknowledged and believed that the Lord Jesus was the true Christ, that He was God incarnate. Although at this time Thomas no longer doubted, he had lost forever the chance to meet with Christ. He had lost forever the chance to be together with Him, to follow Him, to know Him. He had lost the chance for Christ to perfect him. The Lord Jesus’ appearance and His words provided a conclusion, and a verdict on the faith of those who were full of doubts. He used His actual words and actions to tell the doubters, to tell those who only believed in God in heaven but did not believe in Christ: God did not commend their belief, nor did He commend their following which was full of doubts. The day they fully believed in God and Christ could only be the day that God completed His great work. Of course, that day was also the day that their doubt received a verdict. Their attitude toward Christ determined their fate, and their stubborn doubt meant their faith gained them no results, and their rigidness meant their hopes were in vain. Because their belief in God in heaven was fed on illusions, and their doubt toward Christ was actually their true attitude toward God, even though they touched the nail marks on the Lord Jesus’ body, their faith was still useless and their outcome could only be described as beating the wind—in vain” (“God’s Work, God’s Disposition, and God Himself III”).

From these words, I knew that Thomas had doubts about the Lord Jesus for a long time, not just in the matter of the Lord Jesus’ resurrection. In fact, he had harbored doubts toward the Lord Jesus when He was preaching and doing His work. He didn’t believe the Lord Jesus was Christ, the Messiah; he always doubted His identity. Therefore, when the Lord Jesus was resurrected after His crucifixion, Thomas didn’t believe until he saw His resurrected body and personally touched His nail marks. He relied on the viewpoint of “seeing is believing” to believe in God, rather than listened to the Lord’s words with his heart to seek the truth from His work and words. So, while following the Lord Jesus, he always held suspicions of Him, unable to believe and accept His word and work completely. What the Lord Jesus’ word revealed is God’s disposition and it represents God’s substance and what God has and is. Christ is the truth, the way and the life. Only Christ can express the truth and point out the right way of practice to us. This is unattainable to man. If Thomas had listened to the Lord’s words carefully, mulled over His work, and focused on seeking and practicing the truth, he would have known the Lord Jesus’ identity and substance. But because of his doubts, he couldn’t get the Holy Spirit’s enlightenment and illumination. Thus, although he followed the Lord, he didn’t know Him, nor did he have true faith in Him, and he only believed in the vague God in heaven but didn’t believe in the incarnate Christ. Thomas’ belief in the Lord was not in line with God’s will and didn’t achieve God’s requirements. As a result, he couldn’t get God’s blessings.

The fact shows: As for those who hold the viewpoint “seeing is believing” in their belief in God, they have no true faith in God and cannot get God’s approval. The Lord Jesus once said: “when the true worshippers shall worship the Father in spirit and in truth: for the Father seeks such to worship him” (John 4:23). This made me think of the words the Lord said to Peter: “And I will give to you the keys of the kingdom of heaven: and whatever you shall bind on earth shall be bound in heaven: and whatever you shall loose on earth shall be loosed in heaven” (Matthew 16:19). From these words, we can see: Peter’s faith gained the Lord Jesus’ approval and blessings. Thomas and Peter were both the Lord’s disciples, but why did Peter’s faith gain the Lord’s approval and blessings? Then I thought of the words in the Bible: “He said to them, ‘But whom say you that I am?’ And Simon Peter answered and said, You are the Christ, the Son of the living God” (Matthew 16:15-16). Through these words, I understood that Peter got the Holy Spirit’s enlightenment when the Lord Jesus did His work and expressed words so that he recognized the Lord Jesus was Christ, the Messiah. Peter was a person who thirsted for truth and pursued the truth. He paid specially attention to practicing and experiencing the Lord Jesus’ word and work and usually pondered the Lord’s words. When he met some questions he didn’t understand, he would pray to God, seek and practice the truth. So the Holy Spirit enlightened him to recognize the Lord Jesus’ identity as the incarnate Christ. God is righteous and faithful, and He doesn’t give anyone special treatment. The Holy Spirit enlightens whoever pursues the truth and pursues to know God.

In the last days, with regard to the Lord’s return, many people around us hold on to the view of “seeing is believing,” thinking the Lord will return by descending with the clouds. So they don’t believe anything that testifies the Lord has returned. This provokes us into thinking: Isn’t such faith the same as the Thomas’? If we only believe what we have seen, is this true faith in God? Can such faith be approved by the Lord? Can people with such a faith welcome the Lord’s return and enter the kingdom of heaven?

At this time, I thought of the time of Noah’s ark. Noah was the one who obeyed God after hearing God’s words. He had never seen the flood, but he did whatever God said. His faith was approved by God. Because he listened to God’s words and built the ark, he finally received God’s salvation and his family of eight survived. While those who didn’t listen to God’s words but only saw with their eyes were destroyed by the flood. Now, if we still cling to our own view that only when seeing the Lord descends publicly on a white cloud will we believe, it will be too late by then. So, only if we seek and investigate the returned Lord’s word and work with a humble heart, and listen to God’s voice carefully, can we surely not be abandoned, can we keep pace with God’s footprints and gain God’s salvation. Just as Revelation said: “He that has an ear, let him hear what the Spirit says to the churches” (Revelation 2:7). “Behold, I stand at the door, and knock: if any man hear my voice, and open the door, I will come in to him, and will sup with him, and he with me” (Revelation 3:20).

Believe in God
Previous Post What Do You Feel About God Making Clothes for Adam and Eve?
Next Post What Kind of Christian Can Really Obtain God’s Approval?

The Lord Jesus said, "Therefore I say to you, What things soever you desire, when you pray, believe that you receive them, and you shall have them." -…

By Li Zhi I, who have believed in God for many years, had always thought that those who believed in God’s existence, could follow God and often pray…

To earn enough money to live a good life, Ding Ruilin and her husband put in bitterly hard work to open and run a business. But, thanks to the CCP gov…