What Does Christ Mean? Why Is the Lord Jesus Called Christ?

All brothers and sisters know that the word “Christ” appears nowhere in the Old Testament but only in the New Testament, and that Christ is the appellation of the Lord Jesus. This term in Hebrew is “Messiah,” and means “the anointed One.”

The Old Testament records that the priests God put in place had to be anointed. For example, Aaron and his sons served as priests after being anointed. (see Exodus 28:41). In addition, when God chose a king for the Israelites, He sent a prophet to anoint the chosen person with the anointing oil. For example, the prophet Samuel anointed Saul, the son of Kish, as the first king of the nation of Israel by the word of Jehovah God (See 1 Samuel 9:15–17 and 10:1). After Saul was rejected because he disobeyed God, by the word of Jehovah God, Samuel anointed David, the son of Jesse, as the king of the people of Israel (See 1 Samuel 16:1–13). Before he died, King David sent the priest Zadok and the prophet Nathan down to Gihon to anoint his son Solomon as king (See 1 Kings 1:32–40). From these events, we can clearly see that “the anointed one” was the one who served God or chosen as a king. If Christ is referred to as the anointed One, then why is it that the high priest Aaron and his sons were not called Christ after they were anointed? And Saul, David, and Solomon also got anointed and were all kings, so why were they not called Christ? Why is it that only the Lord Jesus was called Christ? 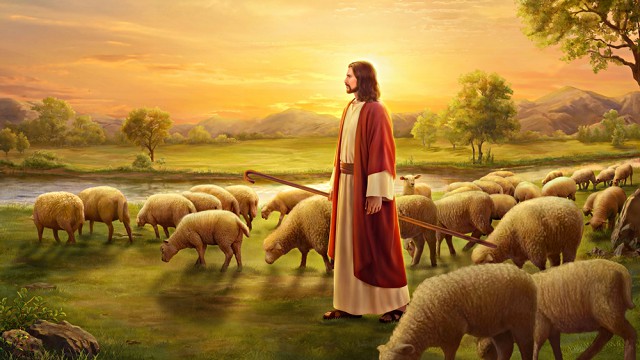 This problem had been bothering me for many years. I had asked many preachers about it, but never got an exact answer. Until recently, when I mentioned it to a friend  and he read and fellowshiped two passages of words with me, I came to understand this aspect of the truth. These two passages say, “The incarnate God is called Christ, and Christ is the flesh donned by the Spirit of God. This flesh is unlike any man that is of the flesh. This difference is because Christ is not of flesh and blood but is the incarnation of the Spirit. He has both a normal humanity and a complete divinity. His divinity is not possessed by any man. His normal humanity sustains all His normal activities in the flesh, while His divinity carries out the work of God Himself. Be it His humanity or divinity, both submit to the will of the heavenly Father. The substance of Christ is the Spirit, that is, the divinity. Therefore, His substance is that of God Himself….”

“God become flesh is called Christ, and so the Christ that can give people the truth is called God. There is nothing excessive about this, for He possesses the substance of God, and possesses God’s disposition, and wisdom in His work, that are unattainable by man. … Christ is not merely the manifestation of God on earth, but instead, the particular flesh assumed by God as He carries out and completes His work among man. This flesh is not one that can be replaced by just any man, but one that can adequately bear God’s work on earth, and express the disposition of God, and well represent God, and provide man with life.”

It turns out that “Christ” means the incarnation of God. Though He is ordinary and normal in terms of His appearance, Christ possesses God’s divine being and is the embodiment of the Spirit of God. He is God Himself. That the Lord Jesus can be called Christ is because He is God incarnate. He not only possesses normal humanity, but also has divinity—which is not possessed by any man. The word and work of the Lord Jesus and the disposition He expressed were completely the direct expression of God’s divinity. For example, the Lord Jesus’ word and work are full of authority and power. As soon as He spoke, His words became reality, such as when He brought the dead back to life, calmed the wind and the sea, healed the sickness, forgave man’s sins, and so on. The Lord Jesus began the Age of Grace, bringing  the way of repentance, revealing the mysteries of the kingdom of heaven, and expressing many truths and a disposition that was mainly mercy and love. In order to redeem all mankind, He was nailed to the cross and as a result, the sins of man were forgiven. The Lord Jesus’ divine substance is not possessed by any created being. Though Aaron and his descendants, Saul, David, and Solomon were anointed ones, they were only God’s creatures and the men who were used by the Holy Spirit or who served God. They didn’t have even the slightest trace of divinity and were not the incarnate God. So, they could not be called Christ. Though the outer appearance of Christ was the same as that of an ordinary man, His essence is different from that of any man. In other words, nobody can be called Christ except God incarnate. Thanks to the Lord’s guidance, after listening to my friend’s fellowship, my confusion had finally been resolved.

• What Does “Christ” Actually Mean?

• The True Meaning of “the Coming of the Son of Man”

• What Does Jesus Christ’s Second Coming With Great Glory Mean?

Previous Post Jesus Was Sinless but Why Did He Still Receive Baptism?
Next Post Do You Know Jesus’ Will When He Spoke Parables?

By Zheng Xi Zheng Xi and her husband, Xin Yu, were reading the Bible at home. When she read this verse: “And see a voice from heaven, saying, This is …

When Jesus did His work, He spoke many parables to His followers. Then, what was Jesus’ will when He spoke parables?

By Lanlan Whenever we talk of the Lord Jesus, we all think of His abundant love for us; He personally came into the world to redeem mankind and was a…
9:18