God was pleased with King Solomon and bestowed incomparable abundance upon him.

After Solomon was born, he received Jehovah God’s favor. Just as it is written in the Bible, “And He sent by the hand of Nathan the prophet; and He called his name Jedidiah, because of Jehovah” (2 Samuel 12:25). When he started to become the king of Israel, he didn’t ask God for wealth or a long life, but for wisdom so that he could rule his kingdom better. And moreover, he accomplished the lifelong desire of his father King David—building a temple for Jehovah God and leading the people of Israel to worship God there. Therefore, Jehovah God gave him great blessings. As a result, under his reign, Israel became incomparably powerful and prosperous. So, many kings of Gentile nations came to render plenty of treasure and rare wood to him and hear his words of wisdom, and thus he was admired as the wisest king. This is just as Jehovah God said to him: “And if you will walk before Me, as David your father walked, in integrity of heart, and in uprightness, to do according to all that I have commanded you, and will keep My statutes and My judgments: Then I will establish the throne of your kingdom on Israel for ever” (1 Kings 9:4–5). 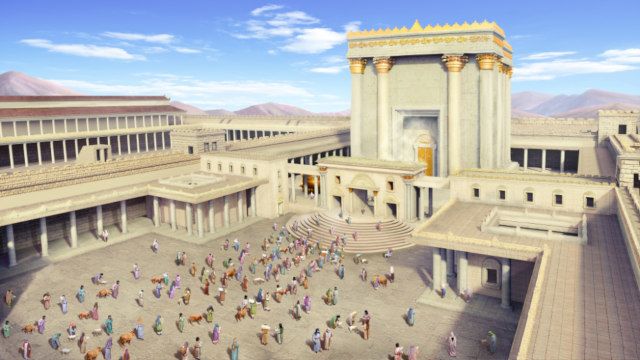 God hated King Solomon, who worshiped idols, and so God rent the kingdom from him.

After then, Solomon married about 1,000 Gentile women as his concubines besides Pharaoh’s daughter. Jehovah God had said to the Israelites before, “You shall not go in to them, neither shall they come in to you: for surely they will turn away your heart after their gods” (1 Kings 11:2). Nevertheless, Solomon went against the words of Jehovah God. In addition, when he reached his old age, he even worshiped the false gods of his concubines, and he also built altars for them and personally sacrificed to them. His such actions were evil in the sight of Jehovah God. So, Jehovah God said to him, “For as much as this is done of you, and you have not kept My covenant and My statutes, which I have commanded you, I will surely rend the kingdom from you, and will give it to your servant” (1 Kings 11:11). As he strayed from God, who had appeared to him twice, and enraged God, in the end God gave Israel to his servant Jeroboam and left only one tribe for his son.

God’s attitude toward man depends on how man treats Him.

God’s words say, “God’s disposition is His own inherent substance. It does not change at all with the passage of time, nor does it change whenever the location changes. His inherent disposition is His intrinsic substance. Regardless of whom He carries out His work upon, His substance does not change, and neither does His righteous disposition. … He does not grow angry because of a change in His substance or because His disposition has produced different elements, but because man’s opposition against Him offends His disposition.” “God’s substance contains no darkness or evil. … When people commit wicked acts and offend God, He will bring His anger upon them. When people truly repent, God’s heart will change, and His anger will cease. When people continue to stubbornly oppose God, His rage will be unceasing; His wrath will press in on them bit by bit until they are destroyed. This is the substance of God’s disposition. Regardless of whether God is expressing wrath or mercy and lovingkindness, man’s conduct, behavior and attitude toward God in the depths of his heart dictate that which is expressed through the revelation of God’s disposition.”

These words give us a further understanding of God’s disposition. God is holy and righteous, and His substance does not change with time or geographical environments, nor does it change with the objects of His work. No matter who it is, even if he was previously liked by God, once he offends God’s disposition, God will never condone his transgressions or indulge him. We can see that God’s disposition is real and vivid, and that how God treats man is determined by his attitude to God. This fact can be clearly confirmed through the two different attitudes God took toward Solomon. When Solomon started to reign, he had a heart of seeking and reverence before God and wholeheartedly built the temple for God. At that time, God was pleased with him and gave him wisdom as well as glory and riches, and even promised him to let his sons and grandsons rule Israel for generations. But in his old age, he betrayed God and worshiped idols along with his concubines. This offended God, so God gave ten out of twelve tribes of Israel to his servant. From this, we can see that God treats people based on the path they walk. God’s disposition is not only merciful and compassionate, but also righteous and majestic. God doesn’t treat people based on emotions. That’s why God didn’t forgive Solomon’s sins in the face of his building the temple for Him. God’s wrath is not for venting His anger, but for driving out dark and evil things and bringing good and positive things to mankind so that man can live in the light and under God’s protection. Therefore, only when we know God’s righteous and majestic disposition will we beget a God-fearing heart, and only then will we not offend God and thus not receive His resentment and hatred. Just as the Bible says, “The fear of Jehovah is the beginning of wisdom: and the knowledge of the Holy is understanding” (Proverbs 9:10).

I have derived a lesson from the story of Solomon: We should adhere to God’s words and keep to the way of fearing God and shunning evil, and we must not act recklessly.

In the past, we always believed that God was a merciful God, and no matter what sins we committed, God would pardon us and forget our transgressions. But from God’s attitudes toward Solomon, we can see that our belief is too one-sided. God is righteous, so He doesn’t forgive us without limit. Just as the Bible says, “For if we sin willfully after that we have received the knowledge of the truth, there remains no more sacrifice for sins” (Hebrews 10:26). We clearly know that the Lord Jesus’ teachings are truth. As long as we follow His words in our lives, such as striving to be the light and the salt of the earth, being honest people, loving the Lord with all our hearts and soul, and magnifying Him, then we will be able to obtain the Lord’s approval. But our failure to know God’s righteous disposition causes us to have no place for God in our hearts and have no reverence for God. As a result, we often go against the Lord’s teachings. Then how can we possibly gain God’s approval? For example, brothers and sisters are all clearly aware that, in belief in God, pursuing wealth, status and fame shouldn’t be taken as the life goal. But when facing the temptations of the evil worldly trends, some yield to them and begin to follow the evil trends, failing to attend meetings regularly. As another example, some have the honor to become preachers to lead brothers and sisters. They have made resolutions before God to be good, loyal stewards for the Lord and shepherd His flock well. But when doing preaching work, they never exalt or bear witness to the Lord. Instead, they talk endlessly about how much pain they have endured and how many churches they have built, to make brothers and sisters look up to and worship them. As a result, the believers are brought before themselves and have no place for God in their hearts. When encountering things, they don’t pray to seek the Lord’s will, but go to ask the preachers. They have replaced God in believers’ hearts. Isn’t this even more offending God’s disposition? … All this shows that we have no God-fearing heart and are unrepentant after betraying the Lord’s teachings. What’s the difference between us and Solomon?

Thereby, I began to reflect on the path I had taken. When I started to believe in the Lord, I enthusiastically spent my efforts for Him. Later, I became a preacher. At first, I thought my stature was small, so I would be cautious and pray to and depend on the Lord when doing things, and I would give all the glory to Him when my work bore fruit. Because of the Lord’s guidance, I had countless things to say when I preached. Gradually, I thought I was good enough, and that I had some capital. As a result, I no longer had God within my heart, and I began to go against His words. When I preached I didn’t testify to the Lord at all, but instead I lifted myself up and bore witness to how I loyally expended for Him and what kind of suffering I had undergone for Him so that I could have my brothers and sisters look up to me and vie with God for His position in their hearts. My actions and deeds brought God’s disgust, so I later felt dark in my spirit, had no words to say in my preaching, and lost His presence. This failure gave me a true experience of the fact that God is holy and His disposition is unoffendable. Therefore, I repented to God immediately. From then on, when preaching, I consciously exposed and dissected my corruption, and exalted God and witnessed for Him. By doing so, I felt at ease and joyful.

From all this it can be seen that, if we can live before God, obey His teachings, practice according to His words, and satisfy and love Him in everything we do, then we will gain His mercy and blessings. However, if we have no fear of God, violate His teachings, and satisfy our own selfish desires in all things, then we certainly will incur His hatred. We should take warning from Solomon’s failure.

How to Know God’s Disposition: From Jesus Christ’ Attitude Toward Different People

God’s Disposition
Previous The Critical Point to Attend the Marriage Feast of the Lamb
Next What’s the Significance Behind the 10 Commandments in the Bible?

God’s treatment of the whole of humanity, foolish and ignorant as humanity is, is primarily based on mercy and tolerance. His wrath, on the other hand…

After Sodom’s Repeated Hostility and Resistance Toward Him, God Utterly Eradicates It

Now that we have a general understanding of God’s righteous disposition, we may return our attention to the city of Sodom—a place that God saw as a ci…

God’s Mercy and Tolerance Are Not Rare—Man’s True Repentance Is Regardless of how angry God had been with the Ninevites, as soon as they declared a fa…

Knowing the purpose of God’s work, what results it will produce on man, and what God’s will for man is, is what everyone who follows God should achiev…