Thanks be to God for giving us the opportunity to fellowship together. 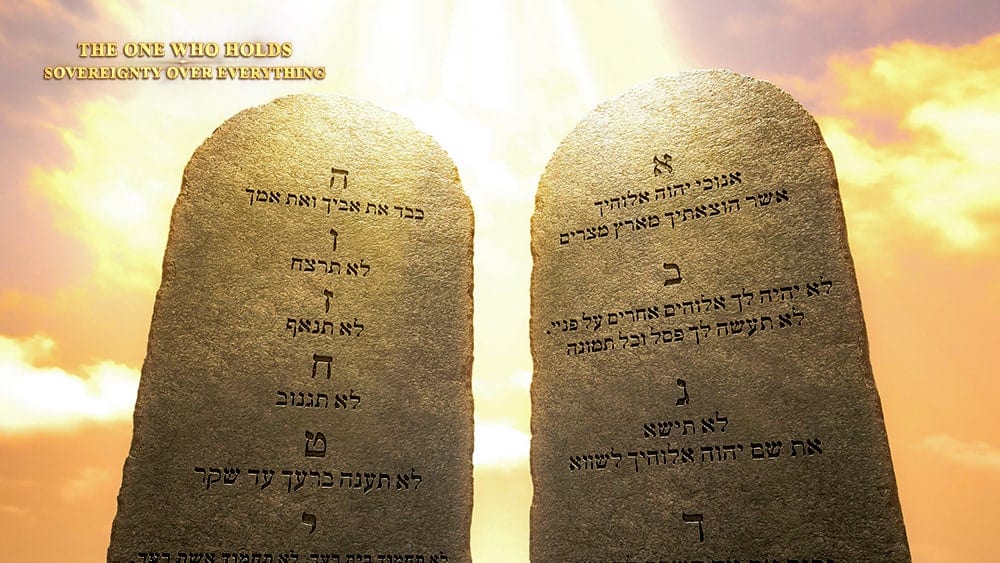 1. The Ten Commandments play a vital role in human development, civilization, and survival.

In one book, it is said that, “The regulations and rules cover a very broad content, they are the specifics of God’s guidance of mankind during the Age of Law, they had to be accepted and obeyed by the people who came before the Age of Law, they are a record of the work done by God during the Age of Law, and they are real proof of God’s leadership and guidance of all mankind.” “Earliest mankind knew nothing, and so God had to begin teaching man from the most superficial and basic principles for survival and regulations necessary for living, imbuing these things in the heart of man bit by bit, and giving man a gradual understanding of God, a gradual appreciation and understanding of God’s leadership, and a basic concept of the relationship between man and God, through these regulations, and through these rules, which were of words. After achieving this effect, only then was God able to, little by little, do the work that He would do later, and thus these regulations and the work done by God during the Age of Law are the bedrock of His work of saving mankind, and the first stage of work in God’s management plan” (“God’s Work, God’s Disposition, and God Himself II”).

This passage shows us that God’s Ten Commandments play a vital role in all of humanity’s civilization and development, because early in the Age of Law, people were like infants, with no discernment of good and evil or right and wrong, no concept of the common sense and rules people should possess, and even less understanding of the concept of sin. In their speech and deeds they were unrestrained, they acted as they please, and they didn’t consider the consequences at all, just as when Cain killed his brother Abel out of jealousy. If Jehovah had not proclaimed the law and guided the people, then sin would have spread over all of humanity, Satan would have corrupted and trampled upon mankind at will, society would have long ago been lost to chaos, and it would have been impossible for mankind to survive to the present. To allow mankind to better worship God and live on the earth, God proclaimed laws, such as commandments and prohibitions, to regulate human behavior, prevent people from sinning, to let people know what sin is and what things are cursed by God, and also to make people understand how to live and worship God, so that the Israelites could live an orderly life, and so that mankind could survive and develop to the present day.

Proclaiming the Ten Commandments laid the foundation for the establishment of mankind’s legal systems. In modern law, the crimes of deliberate homicide, rape, theft, and blasphemy are all derived from the sins listed in the Ten Commandments. The commandments and laws enshrined by Jehovah for the Israelites not only have had a profound impact on human law, but have also played a key role in the establishment and formation of moral civilization and democratic institutions in society. It is precisely because of the limits imposed by these laws that mankind is so orderly. Without them, it would be a mess.

2. The Ten Commandments are filled with God’s love and concern for humanity.

After God proclaimed the law, He granted mercy and blessings to those who kept it, as well as cared for and protected them. Those who violated God’s commandments were burned or stoned to death. Such punishments seem excessively harsh to human eyes, but God’s intentions are always good, because the essence of God is love for people. We treat our own children the same way: To ensure they grow up healthy, happy, and do not go down the path of sin, we formulate rules while they still don’t know how to distinguish between good and evil, such as not allowing them to play with bad children, forbidding them from arbitrarily hitting and scolding others, forbidding them from stealing or taking other children’s things, and so on. If our children are disobedient and don’t walk the path of good, we discipline them appropriately, intending to make them grow up well, not develop bad habits, and not walk the path of sin. Love is the motivation behind these things. If parents don’t educate their children this way from early on and let children develop as they wish, then they will inevitably go down the road of sin and be sanctioned by the law. The same is true of God’s intention in proclaiming the law and commandments. Although the law appears overly strict to people, its purpose is to restrain and protect people. God’s intention is to save the people living under Satan’s power. God doesn’t want to see the whole of mankind corrupted and swallowed by Satan, and set upon the path to destruction. He hopes that people follow His commandments, receive His blessings, and live better lives on the earth. Here, in God’s righteous, majestic disposition, we can see His love and concern for mankind.

3. The law and the Ten Commandments proclaimed by God are the foundation of God’s work among mankind.

The law and commandments proclaimed by God have become the basis for mankind’s continued survival. The fact that God works in this matter allows us to know what is sin and what is not, and also allows us to evaluate the behavior of each individual. Without the laws and commandments proclaimed by God, people would be like newborns, ignorant of everything. We wouldn’t know what sin is, and would understand even less how to confess sin and how to give offerings to God to atone for our sins. Consider a three-story building: The first floor is the foundation, and without it, the second and third floors couldn’t be built. It’s also like parents raising children, who need to teach children according to their ability to accept and understand, ensure they learn the common sense and rules of being a human being, and bit by bit, raise them to maturity. Therefore, God’s proclamation of the laws and commandments is indispensable for God’s guidance of mankind’s life, and also lays the foundation for God’s further work upon mankind.

These things show us the significance of God’s proclamation of the Ten Commandments is far-reaching! The Ten Commandments allow us to see God’s deeds behind the stable life of mankind, and God’s earnest intention that human beings can live happily under His protection. Seeing these things can’t help but arouse our fear and gratitude for God.

Thank God. All the glory be to Almighty God.

Why Were the 250 Leaders Swallowed by the Earth

Previous God’s Blessing and Wrath Upon Solomon
Next What Does “It Is Finished” of Seven Last Words From the Cross Mean?

The word “manna,” I believe, is familiar to every brother and sister in the Lord, as it is recorded in the Old Testament that, after Moses led the Israelites out of Egypt, they stayed in the wilderness for forty years, during which time God sent manna from heaven to feed them every day. At that […]

The Clever Samaritan Woman - Recognized Jesus As the Messiah

Many people are surely familiar with the story about the Samaritan woman. When drawing water, the Samaritan woman ran into the Lord Jesus who asked her for a drink. In conversation with Jesus, she recognized that He was the coming Messiah in prophecy. As an ordinary woman, she neither had much knowledge of the Scriptures, […]

The story of Noah’s ark is very well-known. From the accounts in the Bible, we can see that the people in Noah’s day became depraved and corrupt, living every day wining and dining, scheming and plotting against one another, and in wicked promiscuity. They had lost the form of humanity possessed by those people first […]

What Are the Standards for Being Overcomers in Revelation?

When they hear about “overcomers,” most Christians think those who labor and work for the Lord, who can keep the Lord’s name, who can sit in prison for years without denying the Lord, and who experience all kinds of persecutions and tribulations and yet can still stand witness, are the overcomers referred to in Revelation. […]