One morning I was reading the Bible with my cousin, “Let us be glad and rejoice, and give honor to him: for the marriage of the Lamb is come, and his wife has made herself ready. And to her was granted that she should be arrayed in fine linen, clean and white: for the fine linen is the righteousness of saints. And he said to me, Write, Blessed are they which are called to the marriage supper of the Lamb. And he said to me, These are the true sayings of God” (Revelation 19:7-9).

After finishing reading, I said happily to my cousin, “We all know that this is the vision that John saw about the Lord’s return in the last days. Now it’s already the period of the last days, the time when the Lord will come again. As Christians, we all long to attend the wedding feast of the Lamb, enter into the kingdom of heaven and live together with God. To this end, we must soberly ready ourselves, attending more meetings, praying both in the morning and at night every day, working and preaching more for the Lord, and bearing more fruit. That way, we will be able to attend the wedding feast of the Lamb when the Lord returns. What do you say?” 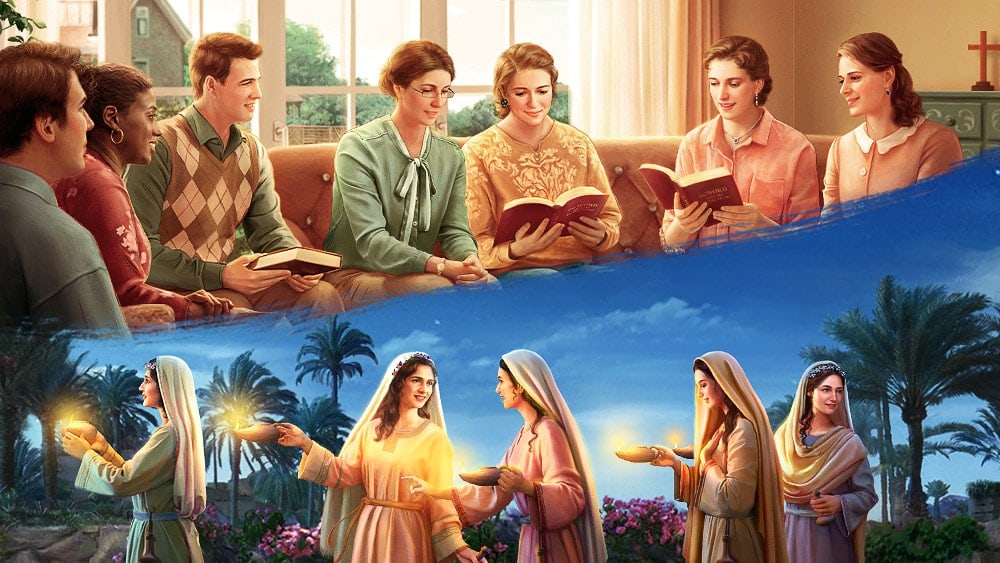 “The Lord Jesus once said, ‘My sheep hear my voice’ (John 10:27). And it is prophesied many times in Revelation chapter 2-3, ‘He that has an ear, let him hear what the Spirit says to the churches.’ Revelation 3:20 also prophesies, ‘Behold, I stand at the door, and knock: if any man hear my voice, and open the door, I will come in to him, and will sup with him, and he with me.’ Besides, a passage that I read on a gospel website says, ‘Because wherever there are new words spoken by God, the voice of God is there, and wherever there are the footsteps of God, God’s deeds are there. Wherever there is the expression of God, there God appears, and wherever God appears, there the truth, the way, and the life exist’ (“The Appearance of God Has Ushered in a New Age”). It’s evident from all of these words that when the Lord comes back in the last days, He will speak again. So it’s very important to focus on hearing God’s voice. Only if we find what the Holy Spirit says to the churches and welcome the Lord’s return can we have the opportunity to dine at the wedding feast of the Lamb and obtain God’s salvation.”

I listened quietly and felt what my cousin said made a lot of sense.

She then continued, “This reminds me of the time when the Lord Jesus did His work. People like Peter, Philip and Nathanael all paid attention to listening to the Lord’s words, from which they recognized that He was the promised Messiah and thus began to follow Him. Nathanael, as we know, recognized the Lord’s true identity because the Lord said that He saw him under the fig tree before Philip called him. Just as the Bible records, ‘Jesus saw Nathanael coming to him, and said of him, Behold an Israelite indeed, in whom is no guile! Nathanael said to him, From where know you me? Jesus answered and said to him, Before that Philip called you, when you were under the fig tree, I saw you. Nathanael answered and said to him, Rabbi, you are the Son of God; you are the King of Israel’ (John 1:47-49). Therefore, those who humbly listen to God’s words are blessed, and they are the ones who follow in God’s footsteps. By contrast, those chief priests, scribes and Pharisees who clung to the law in the temple, though having heard the Lord Jesus’ words and found authority and power in them, didn’t have the intention to seek the truth at all. Despite the facts that the Lord Jesus calmed the wind and the waves with just a word and brought Lazarus, who had been dead for four days, out of his grave, they still stubbornly resisted and condemned Him, and even nailed Him to the cross. In the end, they suffered the curse of God and forever lost the opportunity to welcome the Messiah. So, in the last days, we mustn’t make the same mistake as the Pharisees, but should be the wise virgins like Peter and Nathanael, actively seek and investigate, and focus on listening to God’s voice. When we hear someone spreading news about the Lord’s coming, we must humbly seek to see whether what they preach is God’s appearance and utterances. Once we are certain that it is the utterances of the Holy Spirit, we should immediately follow, and then we’ll be able to attend the wedding feast of the Lamb.”

My cousin’s words made me very excited, and I said, “Thank the Lord! It turns out that we should also actively seek and focus on listening to God’s words and utterances if we want to be raised up before God’s throne and attend the wedding feast of the Lamb when the Lord comes back. Only those who are able to do this are the wise virgins and the most blessed. What you have fellowshiped is in complete accord with the truth. But I still have a question: How can we recognize God’s voice?”

My cousin answered, “The Lord Jesus said, ‘I am the way, the truth, and the life: no man comes to the Father, but by me’ (John 14:6). It can be seen from this that God’s words can endow man with the truth, the way, and the life. Just like when the Lord Jesus came to work and speak, His words held authority and power and could bring true supply to man’s life and give them a path to follow. He did the work of redemption and preached the message ‘Repent: for the kingdom of heaven is at hand’ (Matthew 4:17), and taught man how to tolerate and endure, how to suffer and bear the cross, and all else that constitutes the way man in the Age of Grace should follow. If we carefully ponder the words spoken by the Lord, we’ll see that they are all truths which can show man a path of practice in the new age and let man know how to conduct themselves in daily life. Through these words, we come to understand God’s will and know His compassionate and loving disposition. Besides, the Lord also revealed the mysteries of the kingdom of heaven as well as the conditions under which we enter it. Based on these facts, we can be sure that the Lord Jesus’ words are the voice of God, because apart from God, no one can express these truths or speak these mysteries. Similarly, when the Lord returns to speak His words, He will bring us more truths and reveal more mysteries, just as He prophesied, ‘I have yet many things to say to you, but you cannot bear them now. However, when he, the Spirit of truth, is come, he will guide you into all truth: for he shall not speak of himself; but whatever he shall hear, that shall he speak: and he will show you things to come’ (John 16:12-13).”

Hearing this, I said, “After listening to your communication, I’m a little clearer on this issue. You really understand a lot.”

“I only learned this after reading many passages of fellowship regarding this aspect on a gospel website,” said my cousin. “If you’d like, I can tell you the website, and then you can visit it anytime you want.”

“Really?” I said joyfully. “That would be great!”

We then continued fellowshiping amid a pleasant atmosphere …

Wise Virgins
Previous The Meaning of “Another Gospel” Recorded in Galatians 1:6–8
Next God’s Blessing and Wrath Upon Solomon

How Should We Treat the Bible Prophecy?

Covenant of the Rainbow: God’s Expectations of Man

When I was in elementary school, I learned a story named The Sun Shines Again After the Rain. It contains these words: “The wind became still, and the rain ceased. Then the sun came out, and a rainbow arched the sky. Cicadas began to sing, and spiders spun webs again.” This story was still fresh […]

The Old Testament recorded: “And Moses by the commandment of the LORD sent them from the wilderness of Paran: all those men were heads of the children of Israel” (Numbers 13:3). “And they brought up an evil report of the land which they had searched to the children of Israel, saying, The land, through which […]

What Kind of Christian Can Really Obtain God’s Approval?

One may ask: In the Bible the Lord Jesus said, “Many will say to me in that day, Lord, Lord, have we not prophesied in your name? and in your name have cast out devils? and in your name done many wonderful works? And then will I profess to them, I never knew you: depart […]