When the Lord Jesus was born, He was hunted down by King Herod, enduring sufferings for thirty-three years in His whole life and worked for three and a half years. He saved man out of the bonds of the law and be nailed to the cross. He had finished the work of redemption, tasted life’s bitterness and sweetness. Why did He appear to people after His resurrection? 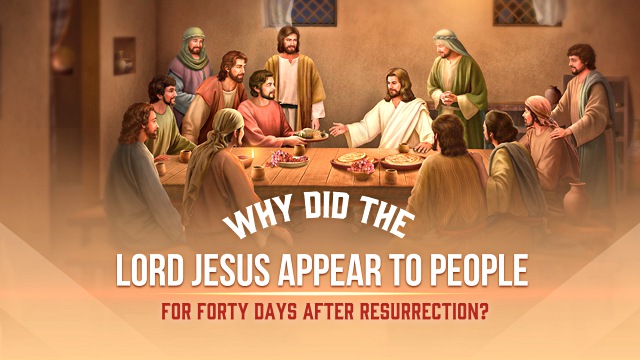 It’s recorded in Acts 1:3, “To whom also he showed himself alive after his passion by many infallible proofs, being seen of them forty days, and speaking of the things pertaining to the kingdom of God:” Whenever reading this verse, a bunch of pious Christians wonder why the Lord Jesus appeared to people for forty days after resurrection. What’s the significance of the appearance? Thanks for the Lord’s guidance, I’m willing to share some of my knowledge.

We all know, before the Passion, the Lord Jesus prayed in the Garden of Gethsemane, but found His disciples asleep several times. Do you know what the Lord was thinking? As the Bible said, “And he comes to the disciples, and finds them asleep, and said to Peter, What, could you not watch with me one hour? Watch and pray, that you enter not into temptation: the spirit indeed is willing, but the flesh is weak” (Matthew 26:40-41). These words reflect the Lord’s extreme sorrow and anxiety, and show His forgiveness and concern for disciples. Once He was arrested by evil person, what would the state of disciples be? The Lord Jesus understood mankind most. He knew man’s faith was too immature. He was afraid that more people would be weak and negative, no longer follow Him. Hence, after the Lord Jesus appearing to people after resurrection, He ate with people at the same table, explaining the Scriptures and speaking heart-to-heart to them. Besides, He made more demands and exhortations of the followers. Because of the Lord’s actions, they felt the Lord’s care and His dearness and loveliness. Disciples and the Lord’s feelings grew deeper. They were more certain that the Lord Jesus is the incarnate God. Therefore, the reason why the Lord Jesus appeared to people for forty days was that He wanted to dismiss the disciples’ worries. So they believed strongly in the Lord’s work and no longer felt puzzled. Meantime, resurrecting from the dead made the disciples understand the Lord Jesus indeed served as a sin offering for humanity. He fulfilled the work of redemption, walking out of the valley of the shadow of death and overcoming the forces of darkness. Then, people could follow the Lord without hesitation and misgiving. This is one aspect of the meaning of the Lord’s appearance to the disciples.

On the other, people at that time stuck to the Old Testament laws, giving sacrifice and keeping the statutes and ordinances, praying to Jehovah God in heaven. They had a little understanding of God. If the Lord Jesus hadn’t appeared after resurrection, people would easily have gone back to the Age of Law and lived their old lives. Then the Lord’s plan of saving man would fall through. After His resurrection, people indeed felt His true existence, could see and touch Him. As long as people prayed to the Lord with a true heart and obeyed His teachings, they could get more grace from the Lord and experience His more deeds. A new era was dawning. They stepped into the Age of Grace from the Age of Law. It was because of the Lord’s appearance that the disciples were willing to resolutely follow Him and spread the gospel without caring their lives. Finally, the Lord’s gospel has spread all over the world. We can be certain that the Lord Jesus’s resurrection is the greatest of visions for every Christian’s belief in the Lord.

Lately, I got inspiration and help from one spiritual book, it is said, “After the Lord Jesus was resurrected, He appeared to the people He thought necessary, spoke with them, and made requirements of them, leaving behind His intentions, and His expectations of people. That is to say, as God incarnate, it doesn’t matter if it was during His time in the flesh, or in the spiritual body after being nailed to the cross and being resurrected—His concern for mankind and requirements of people did not change. He was concerned about these disciples before He was up on the cross; in His heart, He was clear on the state of every single person, He understood every person’s deficiency, and of course His understanding of every person was the same after He had died, resurrected, and become a spiritual body as it was when He was in the flesh. He knew that people weren’t entirely certain of His identity as Christ, but during His time in the flesh He did not make strict demands of people. But after He had been resurrected He appeared to them, and He made them absolutely certain that the Lord Jesus had come from God, that He was God incarnate, and He used the fact of His appearance and His resurrection as the greatest vision and motivation for mankind’s lifelong pursuit. His resurrection from death not only strengthened all those who followed Him, but also thoroughly put His work of the Age of Grace into effect among mankind, and thus the gospel of the Lord Jesus’ salvation in the Age of Grace gradually spread to every corner of humanity. … The appearance of the Lord Jesus materialized His intense concern for His followers in humanity and handed it over to His spiritual body, or you could say His divinity. His appearance allowed people to have another experience and feeling of God’s concern and care while also powerfully proving that God is the One who opens up an age, who develops an age, and He is the One who ends an age. Through His appearance He strengthened the faith of all people, and through His appearance He proved to the world the fact that He is God Himself. This gave His followers eternal confirmation, and through His appearance He also opened up a phase of His work in the new age” (“God’s Work, God’s Disposition, and God Himself III”). These words make me know clearly the significance of the Lord Jesus’ forty-day appearance after resurrection. Even though we didn’t experience this, the fact of the Lord’s appearance is the driving force of believing in the Lord. Furthermore, it is the greatest vision for everyone’s faith in God.

Thanks to the Lord’s guidance, my faith has increased more, and my knowledge of the Lord has become more practical. I will no longer separate God between heaven and earth. God is everywhere and knows all things from the beginning. May grace, peace, glory and praise be to the one true God. May the Lord’s more enlightenment always be with us. Amen!

• Meaning of the Lord Jesus’ Appearance to His Disciple Thomas

• What Are the Diverse Meanings of the Lord Jesus’ Resurrection?

Read these 12 carefully chosen Bible verses about the Lord Jesus’ resurrection to sense God’s love and salvation for us. Matthew 20:18-19 Behold, we g…

Xinrui As we all know, in the Bible there are the following scriptures: “And after eight days again his disciples were within, and Thomas with them: t…

By Zheng Fu I think all of the brothers and sisters in the Lord know that after the Lord Jesus was crucified and then resurrected from death, He appea…