4 Principles of Practice Will Make Us God-fearing People

Speaking of fearing God, all brothers and sisters in the Lord are familiar with it. It’s God’s requirement for us and also the criteria for our receiving God’s salvation and entering the kingdom of heaven. So each of us Christians should seek it. Next, we’ll discuss the expressions of fearing God from the following four aspects. 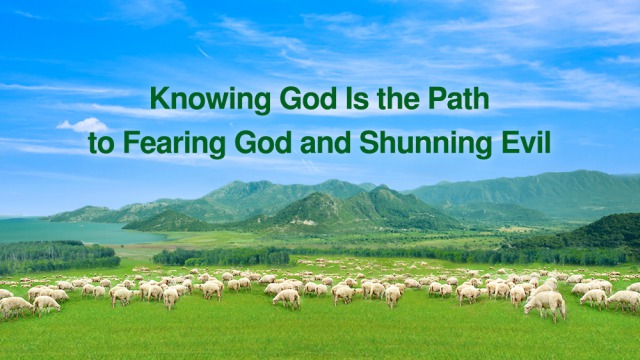 Those who revere God in their hearts, when they can’t distinguish whether or not something comes from God’s work, they are able to have a heart of seeking and don’t freely criticize or judge it no matter whether it is in accordance with their conceptions, for fear that they will violate God’s disposition.

Think back to 2000 years ago, when the Lord Jesus’s work shocked the entire Judea and there were many people who followed and testified Him, almost all the Pharisees crazily resisted and condemned His work. But there was an exception—Gamaliel, an expert in the law and Paul’s teacher. In the face of the Lord Jesus’ work, he didn’t condemn or blaspheme it arbitrarily; instead, he said, “Refrain from these men, and let them alone: for if this counsel or this work be of men, it will come to nothing: But if it be of God, you cannot overthrow it; lest haply you be found even to fight against God” (Acts 5:38-39). He couldn’t understand the fact that the Lord Jesus came from God, but he dared not make arbitrary judgments. Though he wasn’t a prophet or an apostle, he was able to act without sinning in anything he said and didn’t condemn the Lord Jesus at will when faced with things that related to God’s work. This shows that as a thoughtful and insightful believer in God, his basic manifestation of possessing a God-fearing heart is that, he must not judge or condemn at will in the incidents of God’s work, lest he blaspheme against God and so offend God’s disposition.

2. Shunning the Evil Trends and Not Living Lives of Eating, Drinking and Cavorting

In our daily life, there are temptations regarding fame and gain, money, material enjoyment and so on. The lack of a heart of revering God makes many of us fall into them. Gradually, they get swept up and carry on in evil trends and thus become distant from God. From this it can be seen that, to resist the seduction of the evil trends, a God-fearing heart is essential for us. And it’s a great protection for us.

Take Job for example. He was the greatest of all the men of the east at that time, possessing masses of wealth, venerable status and many servants, but the way he treated material enjoyment, eating, drinking and entertainment was different from others’. It was recorded in the Bible as, “And his sons went and feasted in their houses, every one his day; and sent and called for their three sisters to eat and to drink with them. And it was so, when the days of their feasting were gone about, that Job sent and sanctified them, and rose up early in the morning, and offered burnt offerings according to the number of them all: for Job said, It may be that my sons have sinned, and cursed God in their hearts. Thus did Job continually” (Job 1:4-5). From these words we can see that, despite his superlative living environment and abundant material things, Job had never followed his sons and daughters to pursue the pleasures of life. Instead, he was tired of that kind of life. And every time when the feast was over, he would send and sanctify his children. Also, he often offered burnt offerings for them, for fear that they would shun God because of luxurious life. This is how a man with a God-fearing heart treats material life. It’s well worth our imitation.

3. Knowing God’s Disposition From Their Transgressions and Having True Repentance

As is known to every Christian, we all are sinners with corrupt dispositions, so when we treat others and deal with things or serve the Lord, we often follow our own will and thus go against the truth and God’s will. However, those with a God-fearing heart can know God’s disposition from these things, and afterward regret and hate themselves and repent truly.

David was such a man. He was beloved by God and was anointed by Jehovah God to be king. But later, he committed the greatest transgression in his life—scheming and striking down Uriah and then taking his wife Bathsheba by force. These deeds offended God’s disposition and so God punished him. As a result, his family was beset by disasters and his first son born to Bathsheba died prematurely. These things gave him a knowledge of God’s unoffendable disposition of righteousness, so he was willing to accept God’s punishment for him and repent truly. From then on, he no longer did the things that were evil in God’s sight. Instead, he worshiped God and strictly adhered to God’s commandments. In his later years, he got no heat even though he was covered with clothes. So his servants brought a young virgin to his bed to join him under the covers and keep him warm. But he would not move close to her. This proves how he had real repentance. He had a knowledge of God’s disposition and no longer did the things that offended God’s disposition, so he gained God’s approval.

4. Not Complaining God but Standing Witness to Him in the Face of Trials

When there are things that are not in accordance with their conceptions or some trials, those with a God-fearing heart will first put aside their own notions, pray and seek to grasp God’s will. Instead of casually complaining about God and resisting God, they are able to endure suffering and resign themselves to parting with what they treasure to obey God and satisfy God, and finally stand witness to God.

Just like Job, when he lost his sheep and oxen, servants and children, he didn’t complain about God or sin in anything he said, but instead he searched for God’s will. After understanding God’s intention, he praised God’s holy name: “Jehovah gave, and Jehovah has taken away; blessed be the name of Jehovah” (Job 1:21). Later, his whole body became covered in poisonous boils. When he scraped them off sitting in the ashes, his wife advised him to curse God. Just then instead of saying the words that betrayed God, he reprimanded her, “You speak as one of the foolish women speaks. What? shall we receive good at the hand of God, and shall we not receive evil?” (Job 2:10). Job revered God and shunned evil. During trials, he would rather suffer great pain physically and psychologically and yet still wanted to satisfy God and stand witness for God. Finally he became an example for all of us Christians to follow in walking the path of fearing God.

The four aforementioned manifestations of fearing God are what we should pursue entry into. We can practice seeking God’s will and walking the way of fearing God and shunning evil in everything that happens during our daily life or our service to the Lord. Gradually, our stature will be more and more mature and our reverence, faith and obedience to God will become more and more pure. In this way, we will be able to stand witness in all kinds of environments and thus gain God’s approval.

Previous What Is the Difference Between the Work of the 12 Apostles of Jesus and the Work of God?
Next What Is Being Quiet Before God? How Do We Quiet Our Heart Before God?

The Difference Between Following God and Following People

1. A Hymn of God's Words "God's Love Must Be Tasted in Real Life" I If you wish to see God's love and experience God's love, you must go deep into reality, and see everything God does is salvation and love, is to refine the things within that cannot satisfy God's will, to make you […]

Have you ever encountered such problems: God does not answer your prayers and you don’t know how to pray in line with God’s will? Don’t worry! Listen to the following Christian worship songs about prayer and you will find the way to make your prayers heard by God. 1.There Is No True Service Without True […]

7 Movies About Faith in God

These movies about faith in God are worth watching! These Christians’ true experiences will help increase your faith in God. Please watch them! 1. Christian Movie 2020 "Branded" | Persecution and Hardship Strengthens Her Faith in God Li Chenxi has attended gatherings and read the Bible with her parents since she was little. In 1988 […]