Why Did the Pharisees Resist Jesus the Messiah?

After revealing the truth of the history and taking warning from it, we will be able to make a correct choice at the crucial moment of welcoming the Lord’s return. Therefore, today I’d like to share with you: Why did the Pharisees oppose the Lord Jesus?

All brothers and sisters following the Lord know this: In the beginning, when the Lord Jesus came to do His work, the Jewish Pharisees wildly defied and condemned Him and finally nailed Him to the cross, committing a heinous crime. Though the Lord Jesus’ cursing of the Pharisees was written in the New Testament, few people have known the true reason of the Pharisees’ resistance and condemnation of the Lord Jesus. Having fellowshiped this problem many times with my co-workers, I still couldn’t see through the root of it. It was not until I met a preacher who had believed in the Lord for years and listened to his communication that I understood this aspect of the truth. I truly felt: At the critical juncture of welcoming the Lord’s arrival, if we understand this aspect of the truth, we can avoid walking the way of resisting and condemning God as the Pharisees did. Now I’d like to share my understanding with you.

There are two main reasons for the Pharisees opposing the Lord Jesus:

1. The Pharisees in Substance Were Arrogant, Stubborn and Did Not Obey the Truth.

I read a passage of word saying: “Do you wish to know the root of why the Pharisees opposed Jesus? Do you wish to know the substance of the Pharisees? They were full of fantasies about the Messiah. What’s more, they believed only that the Messiah would come, yet did not seek the truth of life. And so, even today they still await the Messiah, for they have no knowledge of the way of life, and do not know what the way of truth is. How, say you, could such foolish, stubborn and ignorant people gain God’s blessing? How could they behold the Messiah? They opposed Jesus because they did not know the direction of the Holy Spirit’s work, because they did not know the way of truth spoken by Jesus, and, furthermore, because they did not understand the Messiah. And since they had never seen the Messiah, and had never been in the company of the Messiah, they made the mistake of paying empty tribute to the name of the Messiah while opposing the substance of the Messiah by any means. These Pharisees in substance were stubborn, arrogant, and did not obey the truth. The principle of their belief in God is: No matter how profound Your preaching, no matter how high Your authority, You are not Christ unless You are called the Messiah. Are these views not preposterous and ridiculous?” (“When You Behold the Spiritual Body of Jesus Will Be When God Has Made Anew Heaven and Earth”).

This passage thoroughly reveals the substance of the Pharisees’ resistance of the Lord Jesus. Deep down, the Pharisees were arrogant and rigid, and thus they defined the Messiah within their own imaginations and conceptions, within the rules and literal words of the Bible. What they held onto when welcoming the Messiah was: No matter how profound Your preaching, no matter how beneficial to people, You are not Christ unless You are called the Messiah prophesied in the Bible. So they frantically resisted the Lord Jesus for His name was not Messiah. At the time, the Lord Jesus did much work among man, expressing the truth and bestowing upon man the way of repentance. All those who sought humbly recognized that the Lord Jesus was the coming Messiah; and those who accepted the work of the Lord Jesus were released from the bondage of law. While the Pharisees heard the Lord Jesus’s preaching and knew very well that the Lord Jesus’ words and work came from God, they didn’t seek the truth at all; instead, they tempted the Lord Jesus and tried to find fault with Him, and even sought every possible means to kill Him. Just as the Bible records: “And it came to pass, that on one of those days, as he taught the people in the temple, and preached the gospel, the chief priests and the scribes came on him with the elders, And spoke to him, saying, Tell us, by what authority do you these things? or who is he that gave you this authority? And he answered and said to them, I will also ask you one thing; and answer me: The baptism of John, was it from heaven, or of men? And they reasoned with themselves, saying, If we shall say, From heaven; he will say, Why then believed you him not? But and if we say, Of men; all the people will stone us: for they be persuaded that John was a prophet. And they answered, that they could not tell from where it was. And Jesus said to them, Neither tell I you by what authority I do these things” (Luke 20:1-8). “Now the feast of unleavened bread drew near, which is called the Passover. And the chief priests and scribes sought how they might kill him; for they feared the people” (Luke 22:1-2).

From the various expressions of the Pharisees, we can see that they didn’t at all have a heart of reverence or obedience for God, nor did they have an attitude of seeking or accepting the truth. They just stubbornly held onto their own conceptions and imaginations. Although they knew what the Lord Jesus expressed is the truth, they still refused to accept it. As we can see, the Pharisees simply hated the truth and hated Christ. 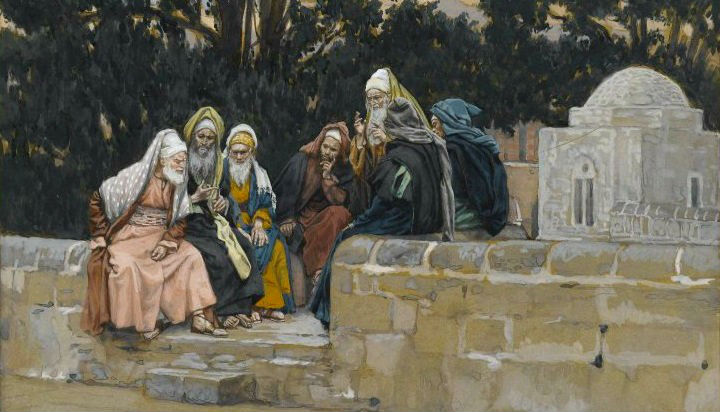 2. Their Purpose Was to Protect Status and Meal-tickets.

When the Lord Jesus preached and did His work, He expressed many truths and gave people abundant grace. He also displayed many miracles: Feeding five thousand with five loaves of bread and two fish, making the lame walk, the blind see, the dead return, and so on, which shocked all of Judea. Many people spread the Lord Jesus’ name and the news of the work He did on earth. And the followers of the Lord Jesus grew great and many. Among those chief priests, scribes and the Pharisees, most of them also acknowledged that the Lord Jesus’ work and words had authority and power. So, they all understood if the Lord Jesus continued His work, their Jewish followers would soon turn to follow Him, that all of Judaism would break down before very long and collapse. In order to save their own positions and livelihoods, they frantically resisted and condemned the Lord Jesus with false accusations, wishing to immediately crucify Him. It is clearly recorded in the Bible: “Then gathered the chief priests and the Pharisees a council, and said, What do we? for this man does many miracles. If we let him thus alone, all men will believe on him: and the Romans shall come and take away both our place and nation. … Then from that day forth they took counsel together for to put him to death” (John 11:47-48, 53). From this we can see that they really used any means to keep their positions and jobs. In the end, they colluded with the Roman government to crucify the Lord Jesus. When the Lord Jesus was nailed to the cross, the sun became dark, the earth shook and the curtain of the temple split open. Three days later, the Lord Jesus was resurrected. After learning these facts, many people repented for their sins. The Pharisees, however, not only did not repent, but even resisted the Lord Jesus more frantically. They paid off soldiers to bear false witness, and also arrested and persecuted the disciples of the Lord Jesus.

From these facts, we can see that the Pharisees carried the banner of service to God, but in essence they were vying with God for position. They wanted to ban the Lord Jesus’ work to achieve their ambitions of permanently controlling the Jewish. They were exactly the enemies of God.

Since we have clearly seen the root of the Pharisees’ resistance of the Lord Jesus, we should learn a lesson from their failure, and not to repeat their mistake when welcoming the Lord’s return in the last days. We can’t be stubborn, arrogant or disobey the truth, or even define the Lord’s return according to our own conceptions and imaginations. Regarding the manner of the Lord’s return, we can’t understand it from the literal meaning of the Bible, and make the Pharisees’ mistake of paying empty tribute to the name of the Messiah while opposing the substance of the Lord Jesus by any means. On welcoming the Lord’s return, one thing is for sure, we should listen to the voice of God. Because the Lord once said: “I have yet many things to say to you, but you cannot bear them now. However, when he, the Spirit of truth, is come, he will guide you into all truth” (John 16:12-13). It is also prophesied many times in Revelation: “He that has an ear, let him hear what the Spirit said to the churches.” So, He who can express the truth must be the Lord’s return, for Christ is the truth, the way, and the life. And we’ll surely be able to welcome the Lord’s arrival if we are willing to accept the truth.

May we all be someone who can hear God’s voice and accept the truth. Then we’ll certainly be brought before God and attend the wedding feast of the lamb with the Lord.

Previous Post Will Jesus First Reveal to Pastors and Elders When He Returns?
Next Post A Discussion About the Lord Jesus’ Return

If We Sit Around Waiting for God’s Revelation, Can We Welcome the Lord?

By Tian Yuan It was a sunny day. Peach blossoms of March covered the hills, and their sweet perfume was pleasing. Co–worker Xu came back from the pe…

At the End of the World, How Should Christians Discern the True Christ From False Ones?

By Ningchen One day, Bill who was studying abroad came back home and said to Bob with delight: “Dad, this time I’ve got some amazing news for you. T…

Second Coming of Jesus: Do You Know How to Welcome the Lord?

Many believers are longing for the second coming of Jesus, but do you know what should we prepare to welcome His coming? This article will help you find the way.