After several especially hot days, a heavy rain finally came. The leaves of the roadside trees were washed clean by the rain and looked much greener. Cheng’en stood by the window, staring straight outside. He didn’t even perceive that the rainwater drifting in through the slightly open window had wetted his clothes, for his mind was occupied with the scripture he had read these few days, which said: “And Jehovah said to Satan, Have you considered my servant Job, that there is none like him in the earth, a perfect and an upright man, one that fears God, and eschews evil?” (Job 2:3). It was the second time that Jehovah God said this in front of Satan. But why was it that Jehovah God spoke so highly of Job? In Cheng’en’s opinion, Job was not that perfect and upright, for he cursed the day of his birth when he felt extremely bitter and distressed. As is known to all believers in God, all that we possess came from God, and the time of our birth was also predestined by God. All that comes from God is good—we should thank and praise God. However, Job cursed the day of his birth when in pain, didn’t he lack reverence for God? But why did God still call him a perfect and upright man who feared God and shunned evil? This question haunted Cheng’en all along. 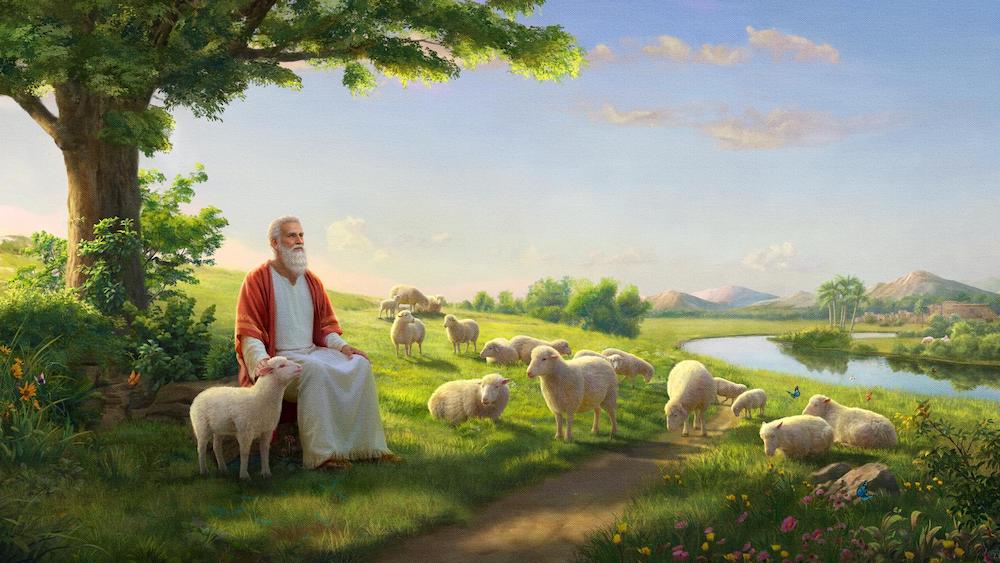 Until one day, Cheng’en got a book from one of his friends. There’s a passage in the book saying as follows: “When Job opened his mouth and cursed the day of his birth, this act astonished all the spiritual figures, including the three friends of Job. Man came from God, and should be thankful for the life and flesh, as well as the day of his birth, bestowed upon him by God, and he should not curse them. This is something that ordinary people can understand and conceive. For anyone who follows God, this understanding is sacred and inviolable, and it is a truth that can never change. Job, on the other hand, broke the rules: He cursed the day of his birth. This is an act that ordinary people consider to constitute crossing over into forbidden territory. Not only is Job not entitled to people’s understanding and sympathy, he is also not entitled to God’s forgiveness” (“God’s Work, God’s Disposition, and God Himself II”). Seeing these words, Cheng’en’s heart was immediately attracted by them: Isn’t these words exactly what I think? All that men possess comes from God, and the day of our birth are certainly included. As someone assessed as a perfect man by God, why did Job curse the day of his birth? Why was it that his acting like this was not condemned by God?

Then Cheng’en continued reading: “When Satan stretched forth its hand to afflict the bones of Job, Job fell into its clutches, without the means to escape or the strength to resist. His body and soul suffered enormous pain, and this pain made him deeply aware of the insignificance, frailty, and powerlessness of man living in the flesh. At the same time, he also gained a profound appreciation and understanding of why God is of a mind to care for and look after mankind. In Satan’s clutches, Job realized that man, who is of flesh and blood, is actually so powerless and weak. When he fell to his knees and prayed to God, he felt as if God was covering His face and hiding, for God had completely placed him in the hands of Satan. At the same time, God also wept for him, and, moreover, was aggrieved for him; God was pained by his pain, and hurt by his hurt…. Job felt God’s pain, as well as how unbearable it was for God…. Job did not want to bring any more grief upon God, nor did he want God to weep for him, much less did he want to see God pained by him. At this moment, Job wanted only to divest himself of his flesh, to no longer endure the pain brought upon him by this flesh, for this would stop God being tormented by his pain—yet he could not, and he had to tolerate not only the pain of the flesh, but also the torment of not wishing to make God anxious. These two pains—one from the flesh, and one from the spirit—brought heart-rending, gut-wrenching pain upon Job, and made him feel how the limitations of man who is of flesh and blood can make one feel frustrated and helpless. Under these circumstances, his yearning for God grew fiercer, and his loathing of Satan became more intense. At this time, Job would have preferred to have never been born into the world of man, would rather that he did not exist, than see God cry tears or feel pain for his sake. He began to deeply loathe his flesh, to be sick and tired of himself, of the day of his birth, and even of all that which was connected to him. He did not wish there to be any more mention of his day of birth or anything to do with it, and so he opened his mouth and cursed the day of his birth: ‘Let the day perish wherein I was born, and the night in which it was said, There is a man child conceived. Let that day be darkness; let not God regard it from above, neither let the light shine on it’ (Job 3:3–4)’” (“God’s Work, God’s Disposition, and God Himself II”).

When Cheng’en read up to here, it suddenly became clear in his heart. He could not help but think of the scenes when Satan attacked and abused Job: First, Job lost his property and children. However, during the trial, Job neither denied nor had the slightest complaint about God, but instead praised God. Satan was thus humiliated in defeat, and meanwhile, its hatred of Job got deeper. When God once again allowed Satan to tempt Job, the way in which it attacked Job was even more cruel. It attacked Job’s flesh, and attempted in vain to cause him to deny God. So Job had to bear the heart-rending and gut-wrenching pain, and his ability to bear reached its limit. At that moment, however, Job still did not deny God in the midst of the great pain. On the contrary, he felt as if God was sad about his pain and was covering His face. When he felt this, he could not bear it—he did not want God to feel even a trace of grief because of his pain. Therefore, he loathed himself and cursed the day of his birth. He would have preferred to have never been born, so that God would not have been grieved or sad. When Job’s flesh endured suffering to the extreme, what he thought of was still God. Job had elevated his obedience to God to the level of consideration and loving. His heart only contained God, and he had achieved a love of God that surpassed the love of himself. As it turned out, that Job cursed the day of his birth in the trials was neither complaining about God, nor having no reverence for God, but showing consideration and love for God. It was so kind-hearted and upright of Job to act like that in the trials, and this could not have been achieved by any other persons. Thinking about these, Cheng’en’s eyes brimmed with warm, excited tears.

At this moment, Cheng’en developed a heart that admired Job. Whether in his daily life or in the trials, Job always abided by the way of fearing God and shunning evil. He never participated in his children’s feasting and merrymaking, but frequently offered burnt sacrifices for them because he was fearful that they offended God. After losing his assets and his sons and daughters, Job did not complain about God, but spoke a classic saying “the Jehovah gave, and Jehovah has taken away; blessed be the name of Jehovah” (Job 1:21). When he was beset by the pain of the flesh and his wife tried to advise him to curse God, not only did he not sin with his lips, but he said, “shall we receive good at the hand of God, and shall we not receive evil?” (Job 2:10). All of Job’s conduct and behavior were presentable before God and could withstand God’s observation and test. He wholeheartedly pursued loving God and gave every care to God’s will. What he lived out was not feigned or learned; it absolutely stemmed from his humanity that was kind-hearted and upright, as well as his true knowledge of God. He showed a true representation of himself and always acted upon what he thought. In God’s eyes, Job was a simple and honest person. God called him a perfect man, of which he was fully deserving.

In thinking about this, Cheng’en felt ashamed: God said that Job was a perfect man. This is the truth. The words of God are trustworthy and unquestionable. However, I questioned God’s words and thought that Job was not perfect. How am I any different to Satan? Satan did not acknowledge the accuracy of God’s words, did not acknowledge God’s words are the truth, and it believed that as long as God deprived Job of all that he had, Job would undoubtedly deny God, but it failed in humiliation in the end. At the thought of this, Cheng’en was thankful to the Lord for His grace. Through these words, he realized his own foolishness and ignorance. He also recognized: Man’s own conceptions and imagination are not the truth, and only God’s words are the truth. Regardless if man can accept God’s words or not or whether or not God’s words conform to man’s conceptions, only if we seek the truth in them and obey them are we reasonable persons. Such persons shall not be ashamed!

Story of Job The Trial of Job
Previous What Does “Another Gospel” That Paul Said Refer to?
Next The Key Points of the Samaritan Woman Recognizing the Lord Jesus Was the Messiah

Assessments of Job by God and in the Bible

Job 1:1 There was a man in the land of Uz, whose name was Job; and that man was perfect and upright, and one that feared God, and eschewed evil. Job …

Although most people now recognize that Job was perfect and upright and that he feared God and shunned evil, this recognition does not give them a gre…

a. The Words Spoken by God Job 2:3 And Jehovah said to Satan, Have you considered My servant Job, that there is none like him in the earth, a perfect…

The Manifestation of Job’s Fear of God in His Life—A Commentary on Job 1:5

And it was so, when the days of their feasting were gone about, that Job sent and sanctified them, and rose up early in the morning, and offered burnt…