And Jacob went on his way, and the angels of God met him. And when Jacob saw them, he said, This is God's host: and he called the name of that place Mahanaim. And Jacob sent messengers before him to Esau his brother to the land of Seir, the country of Edom. And he commanded them, saying, Thus shall you speak to my lord Esau; Your servant Jacob said thus, I have sojourned with Laban, and stayed there until now: And I have oxen, and asses, flocks, and menservants, and womenservants: and I have sent to tell my lord, that I may find grace in your sight. 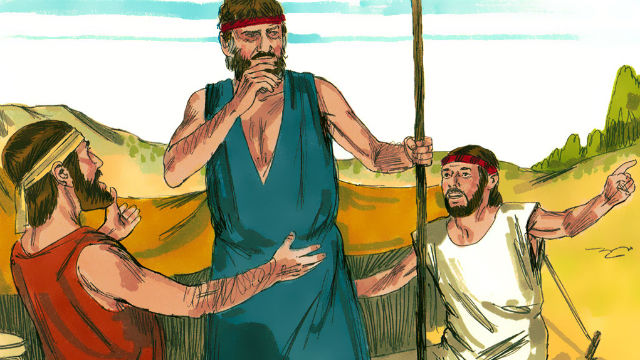 And the messengers returned to Jacob, saying, We came to your brother Esau, and also he comes to meet you, and four hundred men with him. Then Jacob was greatly afraid and distressed: and he divided the people that was with him, and the flocks, and herds, and the camels, into two bands; And said, If Esau come to the one company, and smite it, then the other company which is left shall escape. And Jacob said, O God of my father Abraham, and God of my father Isaac, the LORD which said to me, Return to your country, and to your kindred, and I will deal well with you: I am not worthy of the least of all the mercies, and of all the truth, which you have showed to your servant; for with my staff I passed over this Jordan; and now I am become two bands. Deliver me, I pray you, from the hand of my brother, from the hand of Esau: for I fear him, lest he will come and smite me, and the mother with the children. And you said, I will surely do you good, and make your seed as the sand of the sea, which cannot be numbered for multitude. 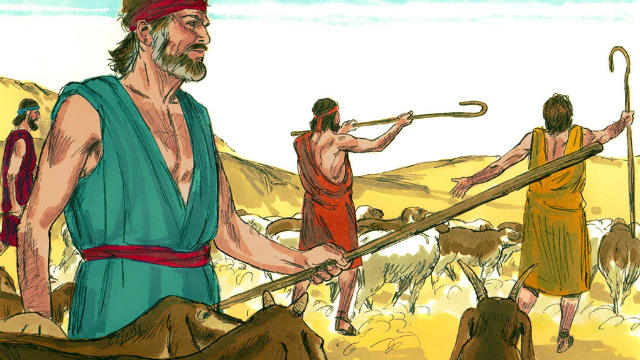 And he lodged there that same night; and took of that which came to his hand a present for Esau his brother; Two hundred she goats, and twenty he goats, two hundred ewes, and twenty rams, Thirty milk camels with their colts, forty cows, and ten bulls, twenty she asses, and ten foals. And he delivered them into the hand of his servants, every drove by themselves; and said to his servants, Pass over before me, and put a space between drove and drove. And he commanded the foremost, saying, When Esau my brother meets you, and asks you, saying, Whose are you? and where go you? and whose are these before you? Then you shall say, They be your servant Jacob's; it is a present sent to my lord Esau: and, behold, also he is behind us. And so commanded he the second, and the third, and all that followed the droves, saying, On this manner shall you speak to Esau, when you find him. And say you moreover, Behold, your servant Jacob is behind us. For he said, I will appease him with the present that goes before me, and afterward I will see his face; peradventure he will accept of me. So went the present over before him: and himself lodged that night in the company. 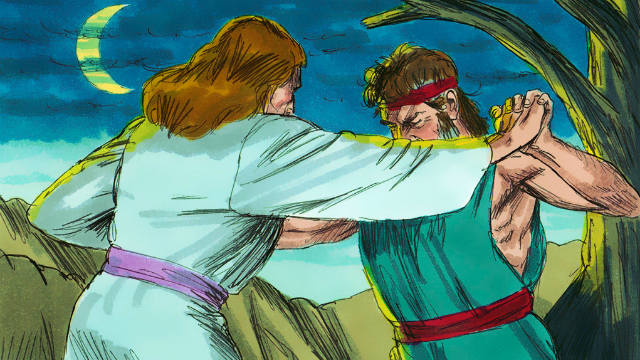 And he rose up that night, and took his two wives, and his two womenservants, and his eleven sons, and passed over the ford Jabbok. And he took them, and sent them over the brook, and sent over that he had. And Jacob was left alone; and there wrestled a man with him until the breaking of the day. And when he saw that he prevailed not against him, he touched the hollow of his thigh; and the hollow of Jacob's thigh was out of joint, as he wrestled with him. And he said, Let me go, for the day breaks. And he said, I will not let you go, except you bless me. And he said to him, What is your name? And he said, Jacob. And he said, Your name shall be called no more Jacob, but Israel: for as a prince have you power with God and with men, and have prevailed. And Jacob asked him, and said, Tell me, I pray you, your name. And he said, Why is it that you do ask after my name? And he blessed him there. And Jacob called the name of the place Peniel: for I have seen God face to face, and my life is preserved. And as he passed over Penuel the sun rose on him, and he halted on his thigh. Therefore the children of Israel eat not of the sinew which shrank, which is on the hollow of the thigh, to this day: because he touched the hollow of Jacob's thigh in the sinew that shrank. 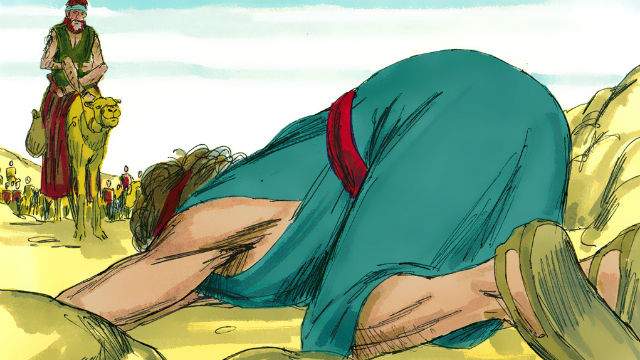 And Jacob lifted up his eyes, and looked, and, behold, Esau came, and with him four hundred men. And he divided the children to Leah, and to Rachel, and to the two handmaids. And he put the handmaids and their children foremost, and Leah and her children after, and Rachel and Joseph last. And he passed over before them, and bowed himself to the ground seven times, until he came near to his brother. 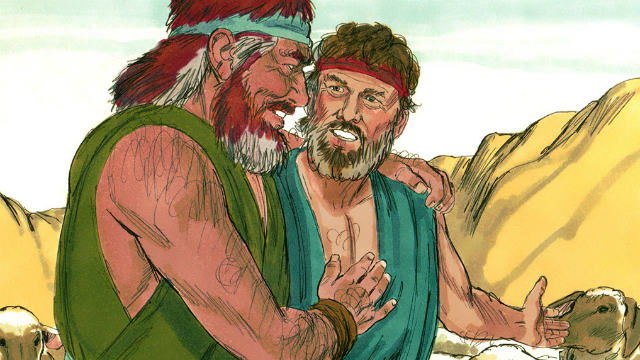 And Esau ran to meet him, and embraced him, and fell on his neck, and kissed him: and they wept. And he lifted up his eyes, and saw the women and the children; and said, Who are those with you? And he said, The children which God has graciously given your servant. Then the handmaidens came near, they and their children, and they bowed themselves. And Leah also with her children came near, and bowed themselves: and after came Joseph near and Rachel, and they bowed themselves. And he said, What mean you by all this drove which I met? And he said, These are to find grace in the sight of my lord. And Esau said, I have enough, my brother; keep that you have to yourself. And Jacob said, No, I pray you, if now I have found grace in your sight, then receive my present at my hand: for therefore I have seen your face, as though I had seen the face of God, and you were pleased with me. Take, I pray you, my blessing that is brought to you; because God has dealt graciously with me, and because I have enough. And he urged him, and he took it.

And he said, Let us take our journey, and let us go, and I will go before you. And he said to him, My lord knows that the children are tender, and the flocks and herds with young are with me: and if men should overdrive them one day, all the flock will die. Let my lord, I pray you, pass over before his servant: and I will lead on softly, according as the cattle that goes before me and the children be able to endure, until I come to my lord to Seir. 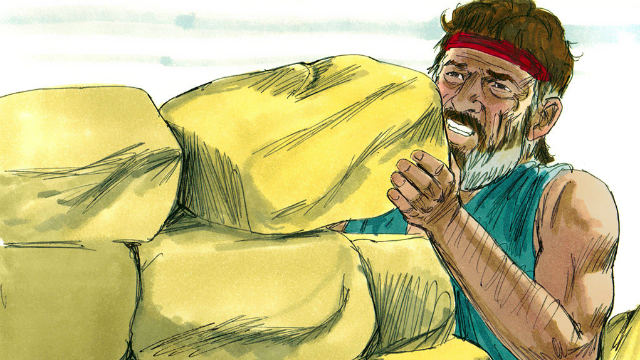 And Esau said, Let me now leave with you some of the folk that are with me. And he said, What needs it? let me find grace in the sight of my lord. So Esau returned that day on his way to Seir. And Jacob journeyed to Succoth, and built him an house, and made booths for his cattle: therefore the name of the place is called Succoth. And Jacob came to Shalem, a city of Shechem, which is in the land of Canaan, when he came from Padanaram; and pitched his tent before the city. And he bought a parcel of a field, where he had spread his tent, at the hand of the children of Hamor, Shechem's father, for an hundred pieces of money. And he erected there an altar, and called it EleloheIsrael.

Jacob's Journey to Egypt (Genesis 46:1-7) Sweet Publishing / FreeBibleimages.org CC BY-SA 3.0 And Israel took his journey with all that he had, and …

Jacob Meets Rachel （Genesis 29:1-14 ) Sweet Publishing / FreeBibleimages.org CC BY-SA 3.0 Then Jacob went on his journey, and came into the land of …