And it came to pass, when Rachel had born Joseph, that Jacob said to Laban, Send me away, that I may go to my own place, and to my country. Give me my wives and my children, for whom I have served you, and let me go: for you know my service which I have done you. And Laban said to him, I pray you, if I have found favor in your eyes, tarry: for I have learned by experience that the LORD has blessed me for your sake. And he said, Appoint me your wages, and I will give it. And he said to him, You know how I have served you, and how your cattle was with me. For it was little which you had before I came, and it is now increased to a multitude; and the LORD has blessed you since my coming: and now when shall I provide for my own house also? And he said, What shall I give you? And Jacob said, You shall not give me any thing: if you will do this thing for me, I will again feed and keep your flock. I will pass through all your flock to day, removing from there all the speckled and spotted cattle, and all the brown cattle among the sheep, and the spotted and speckled among the goats: and of such shall be my hire. So shall my righteousness answer for me in time to come, when it shall come for my hire before your face: every one that is not speckled and spotted among the goats, and brown among the sheep, that shall be counted stolen with me. And Laban said, Behold, I would it might be according to your word.

And Jacob took him rods of green poplar, and of the hazel and chesnut tree; and pilled white strakes in them, and made the white appear which was in the rods. And he set the rods which he had pilled before the flocks in the gutters in the watering troughs when the flocks came to drink, that they should conceive when they came to drink. And the flocks conceived before the rods, and brought forth cattle ringstraked, speckled, and spotted. And Jacob did separate the lambs, and set the faces of the flocks toward the ringstraked, and all the brown in the flock of Laban; and he put his own flocks by themselves, and put them not to Laban's cattle. And it came to pass, whenever the stronger cattle did conceive, that Jacob laid the rods before the eyes of the cattle in the gutters, that they might conceive among the rods. But when the cattle were feeble, he put them not in: so the feebler were Laban's, and the stronger Jacob's. 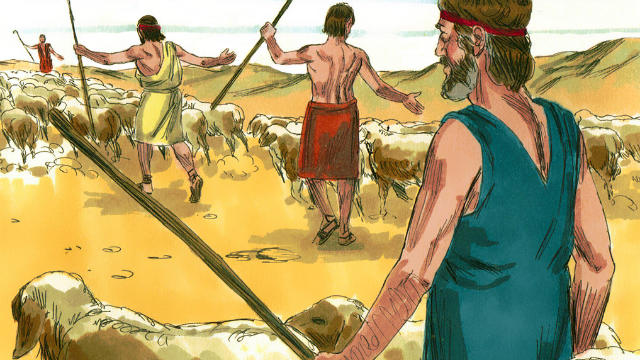 And the man increased exceedingly, and had much cattle, and maidservants, and menservants, and camels, and asses.