One day, Bill who was studying abroad came back home and said to Bob with delight: “Dad, this time I’ve got some amazing news for you. The Lord Jesus for whom we’ve long yearned has returned incarnate in China and has expressed many truths. Lately, I’ve read many of God’s words, and I feel that every one of God’s words contains authority and power. They have deeply convinced me …”

Getting quite excited, Bob could not help but interrupt Bill: “That’s not right. I’ve believed in the Lord Jesus for so many years. I know the Bible very well, and I have worked tirelessly for the Lord and have been on constant lookout for His second coming. If He came He should first give revelation to me, so how come I didn’t know? Since I haven’t received His revelation, I don’t believe that He has returned.”

Bill said: “Dad, I knew you’d say that. I remember you’ve always had such a view. Well then, let me clearly communicate this aspect of the truth with you today.”

Bob raised the cup and took a sip of his coffee. He said: “How many years have you believed in God? How long have you read the Bible for? I’ve read the Bible my whole life—what do you know? Now, you want to fellowship to me? Well, I’d love to see how you will do it.” 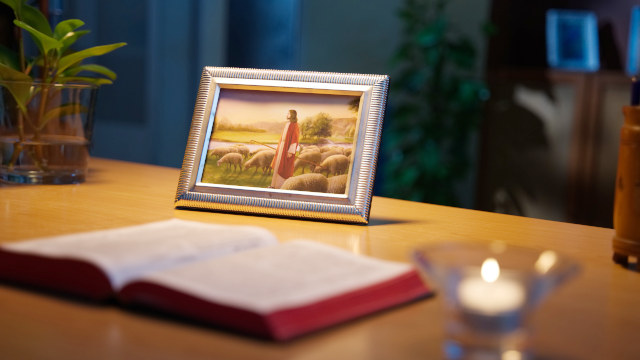 Hearing Bill’s words, Bob felt a little stirred and thought: “There’s something in Bill’s words. The Bible indeed doesn’t say that the Lord will give revelation to some person when He comes. And the Pharisees at that time traversed oceans and continents to spread the gospel, and yet when the Lord came, He didn’t give revelation to them. And none of His disciples received His revelation before following Him. …”

Bob gazed at Bill in surprise, thinking: “Right, why didn’t I think of this before? So many believers in the Lord Jesus in the world begin to believe through the preaching of other people and not because of the Lord Jesus’ revelation. How is it that the more we speak the more I feel what I hold on to is wrong? Am I really wrong?”

Bill said: “Hey, Dad, God’s words say it more clearly. Let me read two passages to you.” Then he took a tablet computer out of his bag and read: “The greatest book of prophecy of Isaiah in the Old Testament never mentioned that a child named Jesus would be born in the age of the New Testament, merely that a male infant would be born by the name of Emmanuel. Why did he not specify the name Jesus? Nowhere in the Old Testament does this name appear, so why then do you still believe in Jesus? Surely you did not see Jesus with your own eyes before you came to believe in Him? Or did you begin to believe upon receiving a revelation? Would God really show you such grace? And bestow upon you such a great blessing? On what basis did you believe in Jesus? Why then do you not believe that God has become flesh this day? Why do you say that the absence of a revelation to you from God proves that He has not become flesh? Must God tell man prior to commencing His work? Must He first receive the approval of man? Isaiah only proclaimed that a male infant would be born in a manger but never prophesied that Mary would give birth to Jesus. Why then did you believe in Jesus whom Mary gave birth to? Surely your belief is not one of uncertainty and confusion!”

“Even more believe that whatever the new work of God, it must be substantiated by prophecies, and that in each stage of such work, all those who follow Him with a true heart must also be shown revelations, else that work could not be that of God. It is already no easy task for man to come to know God. Taken in addition to man’s absurd heart and his rebellious nature of self-importance and conceit, then it is all the more difficult for man to accept the new work of God. Man neither studies the new work of God with care nor accepts it with humility; rather, man adopts an attitude of contempt, waiting for the revelations and guidance of God. Is this not the behavior of a man who rebels against and opposes God? How can such men gain the approval of God?”

After finishing reading, Bill looked at Bob and said: “Dad, from these two passages we can see if we want to come before God and follow Him, we must first leave behind our own conceptions and imaginings. In the face of the Lord’s new work, we should humbly seek and investigate it instead of awaiting God’s revelation based on our own notions and imaginings. If we don’t believe because God doesn’t give us revelation, in the end we’ll certainly miss God’s salvation. It’s just like when the Lord Jesus came to do His work on earth and those Israelites blindly awaited the revelation of the God of heaven and ignored the Lord’s work and words. They ended up as people who longed for the return of the Messiah but rejected the Messiah. Because they hadn’t received God’s revelation, they didn’t acknowledge the Lord Jesus as the Messiah to come and didn’t admit that God incarnate had come to do work and save mankind on earth. As a result, due to resisting God they suffered punishment and brought about the destruction of Israel. Among other things, they were too arrogant and they thought so highly of themselves and believed that the Lord would first give them revelation when He came. In fact, regardless of whether they acknowledged the Lord Jesus as the coming Messiah, God didn’t have to give them revelation in advance. Clearly, our view that if we don’t receive God’s revelation we won’t believe that the Lord has returned isn’t in accordance with the truth.”

After hearing those words of God, Bob felt that they were really authoritative and powerful and couldn’t have come from an ordinary person. And when he heard Bill say his view was not in accordance with the truth, he could not help asking: “What you said makes some sense. With regard to the Lord’s arrival, we shouldn’t wait for His revelation, so how should we confirm that it is the appearance and work of the Lord?”

Bill looked at Bob and answered: “Dad, today Almighty God has come in secret and has expressed many truths. We believers accept and follow God’s work in the last days, not because of receiving the Holy Spirit’s revelation, but because through reading God’s words, fellowshiping about the truth and obtaining the enlightenment and illumination of the Holy Spirit, we feel that Almighty God’s words are the truth and are God’s utterances. In the last days, God expresses truths to do the work of judgment, and we all accept and follow Him after hearing God’s voice. This exactly fulfills the words prophesied many times in Revelation, ‘He that has an ear, let him hear what the Spirit says to the churches’ (Revelation 2–3). In the last days, God expresses the truth to find His sheep. Those who hear and understand God’s voice are His sheep and the wise virgins. Those that don’t understand God’s voice must be the foolish virgins. This way, people naturally end up with their own kind. Dad, isn’t God so wise and righteous? God treats everyone fairly.”

Hearing that, Bob nodded slightly and said: “Oh, I remember a few passages in the Bible. The Lord Jesus prophesied: ‘My sheep hear my voice, and I know them, and they follow me’ (John 10:27). ‘Behold, I stand at the door, and knock: if any man hear my voice, and open the door, I will come in to him, and will sup with him, and he with me’ (Revelation 3:20).”

Bill, scratching his head, grinned and said, “Yea! These verses are what I was talking about. Dad, you are indeed more familiar with the Bible.”

Bob nodded and said thoughtfully, “Yeah, if the Lord gave revelation to people in order that they would believe in Him, then why would He still say God’s sheep hear His voice? Aren’t these two things contradictory?”

Bill nodded his head and said: “Yes, Dad. But in fact, there’s God’s wisdom in it. God determines whether people belong to Him based on whether they can recognize His voice. Those who recognize God’s voice and directly accept Christ of the last days, without receiving God’s revelation, are truly blessed. Just as the Lord Jesus said to Thomas: ‘Because you have seen me, you have believed: blessed are they that have not seen, and yet have believed’ (John 20:29). So, in investigating the true way, receiving God’s revelation isn’t important; the key is whether we can recognize God’s voice in God’s words. It’s just as the Bible says: ‘So then faith comes by hearing, and hearing by the word of God’ (Romans 10:17). If we merely await God’s revelation, and don’t investigate the Spirit’s words to the churches, then we’ll be eliminated and abandoned by God’s work and be left weeping and gnashing our teeth when the disasters happen. Dad, we should emulate those disciples that followed the Lord Jesus, seek God with a pure and honest heart, and know and be certain about God from the truth expressed by God. Only in this way can we be blessed by God.”

Bob looked at Bill and was overcome with emotion: “Thank the Lord! Bill, you made a lot of progress in these two years abroad, and now you understand so much. You’re so much better than your old man, and I’m a pastor!” Bill said sheepishly: “ I didn’t achieve that solely by my own effort. It’s through reading God’s words and fellowshiping with the brothers and sisters from The Church of Almighty God that I’ve understood these things.”

It was getting dark. As the light went on, the room was bathed in a warm and gentle glow.

Previous At the End of the World, How Should Christians Discern the True Christ From False Ones?
Next How Are Foolish Virgins Exposed and Eliminated?

At the End of the World, How Should Christians Discern the True Christ From False Ones?

Wise Virgins Can Hear God’s Voice and Welcome the Lord

Bible Verses for Reference “Then shall the kingdom of heaven be likened to ten virgins, which took their lamps, and went forth to meet the bridegroom…

When Is Jesus Coming Back? Does Really No One Know?

One morning, the sun came through the window and landed on Yixi, who was reading this verse in earnest at the desk: “But of that day and that hour kno…

How to Discern God’s Voice

Bible Verses for Reference “I have yet many things to say to you, but you cannot bear them now. However, when He, the Spirit of truth, is come, He wi…