Devotional Diary: The Lord’s Return – Upon the Cloud or in Flaming Fire? 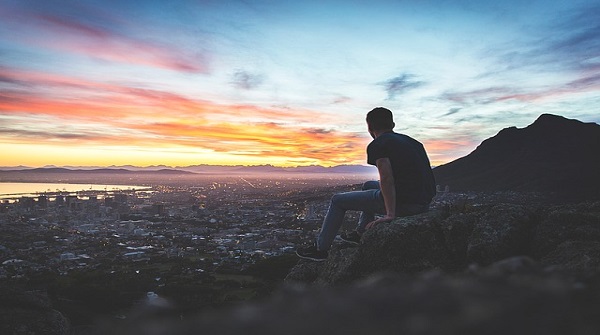 Recently, I felt increasingly dull and tedious in reading the Bible, for there was no light at all. Although I had kept praying every day all along, it had little effect and there was no moving in my spirit, and I felt as if the Lord hid His face from me and didn’t heed me. But while thinking of not reading the Bible, I felt scared. For in the past over ten years, my greatest wish was to be taken into the kingdom of heaven by the Lord when He returned; if I didn’t persist in reading the Bible, I feared that my relationship with the Lord would be severed completely and I would be abandoned when the Lord came.

Previously, I saw Matthew 24:30 and 26:64 and Mark 13:26 all said that the Lord would come upon a cloud. Especially when I read Revelation 1:7: “Behold, he comes with clouds; and every eye shall see him, and they also which pierced him: and all kindreds of the earth shall wail because of him. Even so, Amen,” I was certain that the Lord would descend on a cloud when He returned, and that all men would see Him. Therefore, I often prayed for this, asking the Lord not to abandon me when He came upon the cloud to take His believers. Several days before, I read Matthew 25:6: “And at midnight there was a cry made, Behold, the bridegroom comes; go you out to meet him.” It could be obviously seen from this verse that the Lord would come at midnight. Then I was somewhat worried in my heart: We might all fall asleep at that time, so how will we be able to know it when the Lord comes with clouds? I asked a sister next door, “In what way can we be watchful so as not to be abandoned by the Lord?” “The only way is to pray,” she replied. I was a little disappointed after hearing her words. I said to her, “I just want to know whether there’re other ways except praying.” She blinked and said nothing more.

The other day, I suddenly caught sight of 2 Thessalonians 1:7: “And to you who are troubled rest with us, when the Lord Jesus shall be revealed from heaven with his mighty angels, In flaming fire….” While reading this verse, I couldn’t help feeling confused: Won’t the Lord come with clouds? Why does this verse say that He will be revealed in flaming fire? So how will the Lord come then? I had been troubled by this question these days, and just couldn’t figure it out no matter how much I pondered it. I was somewhat in low spirit. For not only did I not receive any light from reading the Bible, but I found many discrepancies; I read it again and again, but instead of understanding it, I became more puzzled. I wanted to put this aside and ignored it, but just couldn’t let it go, for I felt it was a big problem. I could only pray to the Lord inwardly, “O Lord, why is it that the more I want to know how you will come, the more I become puzzled? Why is this?”

I had been studying the Bible on the internet these days, trying to figure out how the Lord would come. Before when I saw that one verse said the Lord would come at midnight while another verse said the Lord would be revealed in flaming fire, my conception that the Lord must come upon a cloud was shattered. Today, when I read this verse in the Scripture: “But of that day and that hour knows no man, no, not the angels which are in heaven, neither the Son, but the Father” (Mark 13:32), I became even more puzzled: Since man cannot know the exact time of the Lord’s coming, then what should we do to welcome His return? The more I thought about it, the more I became confused. I even complained that those who compiled the Bible hadn’t arranged and presented it properly, which made me become more and more confused while reading it.

Then I remembered that Brother Zheng had once been abroad, so he might know more about this question. After the meal, I called Brother Zheng and asked him to come to my home. When he came, I poured out all my puzzlement. He said: “I used to be confused about how the Lord Jesus will come too. Later, through communicating with brothers and sisters who understood the truth well, I came to know that there are two possible ways that the Lord shall come: Secret arrival and public arrival. Matthew 25:6 says: ‘And at midnight there was a cry made, Behold, the bridegroom comes; go you out to meet him.’ And Mark 13:32 says: ‘But of that day and that hour knows no man, no, not the angels which are in heaven, neither the Son, but the Father.’ These two verses all refer to the Lord’s secret arrival. While Luke 21:27 says: ‘And then shall they see the Son of man coming in a cloud with power and great glory,’ and Revelation 1:7 says: ‘Behold, he comes with clouds; and every eye shall see him, and they also which pierced him: and all kindreds of the earth shall wail because of him. Even so, Amen.’ These all refer to God’s public arrival.

That is to say, the Lord will first descend secretly and then descend publicly. Descending in secret means God will become flesh as the Son of man to do the work of judgment in the last days. The Bible says that ‘But first must he suffer many things,’ and that the Son of man will walk in the churches and walk in the middle of the golden candlesticks. These all refer to the period when the Son of man does the work of judgment after His hidden arrival. The Son of man is born to a human and is no different from an ordinary person in appearance. Although there’s the essence of divinity in Him, it cannot be recognized or known by any person. So the time of God’s work in the flesh is the stage of God’s hidden work. For example, before the Lord Jesus was nailed to the cross, His disciples also did not know Him. And it was because of the revelation of the heavenly Father that Peter was able to recognize the Lord Jesus as the Christ, the Son of the living God. During the period when God is incarnated to work as the Son of man, we can’t recognize Him or understand His words without the work of the Holy Spirit, for the eyes of us human beings are unable to penetrate into the spiritual realm. As such, the period when the Son of man descends to work becomes a stage of God’s hidden advent to mankind.

The stage of God’s hidden descent is the period when God expresses the words and does the work of judgment to save man. After experiencing God’s words and work, men come to know the reality of their own corruptions, and truly see that their satanic natures are too stubborn and cannot be changed easily, and that they need to practice and experience God’s words as well as accept and obey God’s judgment so as to cast off their sinful natures gradually and receive purification and salvation. When men get to this stage, they will truly see that God’s word has produced results on them and God’s management plan of thoroughly saving man has been fulfilled completely. At that time, God’s hidden work will end, and all men will submit before God, thanking God for His salvation and praising God’s almightiness and wisdom and wonderful deeds. After that, God will change His form and appear openly to mankind to do the work of rewarding the good and punishing the evil. And the end of each kind of man will be completely revealed at that time. God will bring those overcomers who have been cleansed through God’s judgment and chastisement and have borne testimonies for God in trials and tribulations into the kingdom. At the same time, God will send down great disasters to punish and destroy all the species of Satan who once resisted God. God’s work of this kind just fulfills the prophecy in Revelation: ‘Behold, he comes with clouds; and every eye shall see him, and they also which pierced him: and all kindreds of the earth shall wail because of him. Even so, Amen’ (Revelation 1:7).”

That day, Brother Zheng also fellowshiped many other truths about the Lord’s coming in the last days. I hadn’t expected that Brother Zheng could explain how the Lord would come and work so clearly and convincingly. I had never heard about such a high knowledge before. I asked him where he read this and why I had never heard about it. He said with a smile, “Before I went abroad, I often got past the Great Firewall to search for the messages about the Lord’s coming; after going abroad, I searched the Internet every day. You can also search on the internet. There’re a lot of movies and videos about the Lord’s return online! You can find a great many on Facebook.” I was very excited to hear this. Brother Zheng not only had solved my puzzle but also pointed out a way for me to seek how the Lord will do the work of purifying and saving man when He returns. I was certain that this was the guidance from the Lord. Thank the Lord! Hallelujah!

Will Jesus Come Back in the Spiritual Body or in the Flesh When Taking His Believers? 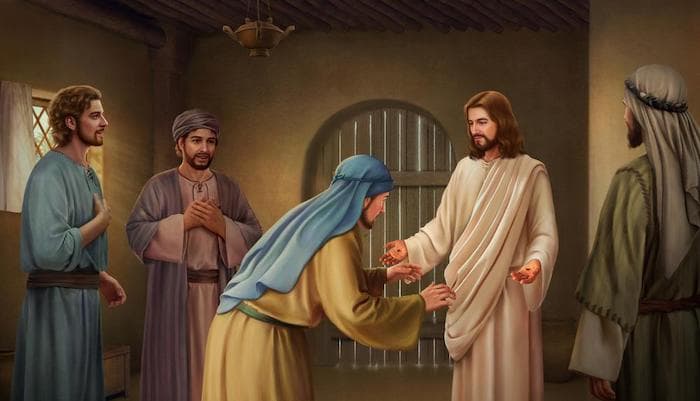 Don’t Become a Doubting Thomas in Welcoming the Lord 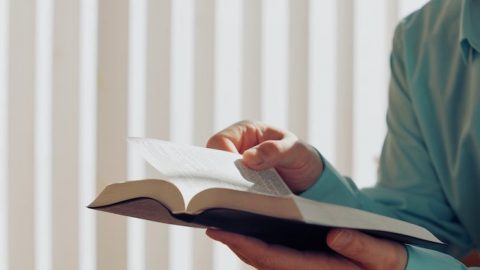 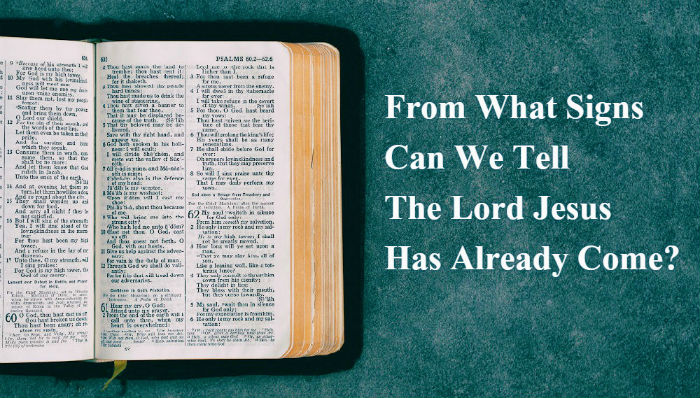 From What Signs Can We Tell The Lord Jesus Has Already Come?
By Lin Hua In the church, Pastor Zhu who wore a suit and leather shoes was standing at the pulpit, with a Bible in his hand. He preached: “Brothers an…