The word “manna,” I believe, is familiar to every brother and sister in the Lord, as it is recorded in the Old Testament that, after Moses led the Israelites out of Egypt, they stayed in the wilderness for forty years, during which time God sent manna from heaven to feed them every day. At that time, the manna bestowed by God was the material food, which the Israelites needed most to survive in those days.

In another chapter of the Bible, Jehovah God also mentioned manna, “And he humbled you, and suffered you to hunger, and fed you with manna, which you knew not, neither did your fathers know; that he might make you know that man does not live by bread only, but by every word that proceeds out of the mouth of Jehovah does man live” (Deuteronomy 8:3). From God’s words, we can know that manna not only refers to one type of material food but also to God’s words, and that we humans live not only by the material manna, but even more by God’s words, the spiritual manna.

Similarly, when the Lord Jesus came to do the work of redeeming all mankind, He once said, “I am the living bread which came down from heaven” (John 6:51), and “I am the way, the truth, and the life” (John 14:6). From the Lord’s words it can be seen that what the Lord supplies to us is not only material things but even more spiritual nourishment. 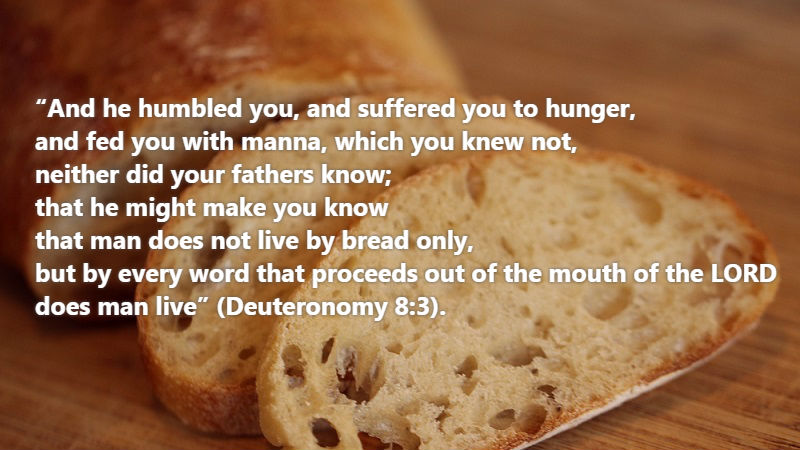 As to this question, let’s look at John 16:12-13, where the Lord Jesus said: “I have yet many things to say to you, but you cannot bear them now. However, when he, the Spirit of truth, is come, he will guide you into all truth: for he shall not speak of himself; but whatever he shall hear, that shall he speak: and he will show you things to come.” Here, the Lord tells us that when He returns, He will speak again, bestow upon us mankind more truths and tell us all of the mysteries we don’t know as well as the things to come. Thus, the word of the returned Lord, I believe, is the hidden manna, the truth that will make our hearts satisfied more and allow us to genuinely appreciate the true meaning of the words “Man shall not live by bread alone, but by every word that proceeds out of the mouth of God.”

Therefore, at this critical juncture of the Lord’s arrival, if we are able to find what the Holy Spirit says to all churches, that is, the utterances of the Holy Spirit, we will obtain the hidden manna.

Previous Post Who are the Ones Chosen by God?
Next Post What’s the Meaning of “God Saw That It Was Good” in the Bible?

What Is the True Meaning of the Resurrection of the Dead in the Bible?

By Xiangwang Editor’s note: Many believers in the Lord think that when the Lord returns, the dead will be resurrected and that the saints through the…

By Xiaoding Such an incident is recorded in Acts in the Bible: Around A.D. 35, under the Holy Spirit’s guidance, the apostles of the Lord Jesus preac…

By Chunyu God was pleased with King Solomon and bestowed incomparable abundance upon him. After Solomon was born, he received Jehovah God’s favor. Jus…

By Song Tao Reading the Scriptures Got Me to Reflect “For to us a child is born, to us a son is given: and the government shall be on His shoulder: an…