When the people of Sodom saw these two servants, they did not ask their reason for coming, nor did anyone ask whether they had come to spread God’s will. On the contrary, they formed a mob and, without waiting for an explanation, came like wild dogs or vicious wolves to seize these two servants. Did God watch these things as they happened? What was God thinking in His heart about this kind of human behavior, this kind of event? God made up His mind to destroy this city; He would not hesitate or wait, nor would He show any more patience. His day had come, and so He set about the work He wished to do. Thus, Genesis 19:24–25 says, “Then Jehovah rained on Sodom and on Gomorrah brimstone and fire from Jehovah out of heaven; And He overthrew those cities, and all the plain, and all the inhabitants of the cities, and that which grew on the ground.” These two verses tell of the method by which God destroyed this city as well as the things God destroyed. First, the Bible recounts that God burned the city with fire, and that the extent of this fire was enough to destroy all the people and all that which grew on the ground. That is to say, the fire, which fell from heaven, not only destroyed the city, it also destroyed all the people and living things inside it, until not a single trace remained. After the city was destroyed, the land was left bereft of living things; there was no more life, nor any signs of life at all. The city had become a wasteland, an empty place filled with deathly silence. There would be no more evil deeds committed against God in this place, no more slaughter or blood spilled. 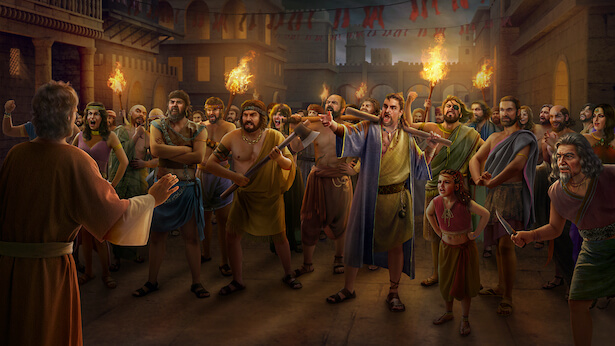 Why did God want to burn this city so thoroughly? What can you see here? Could God really bear to watch mankind and nature, His own creations, be destroyed like this? If you can discern Jehovah God’s anger from the fire that was cast down from heaven, then it is not difficult to see how great His rage was, judging by the targets of His destruction and the degree to which this city was annihilated. When God despises a city, He will deliver His punishment upon it. When God is disgusted with a city, He will issue repeated warnings to inform people of His anger. However, when God decides to put an end to and destroy a city—that is, when His wrath and majesty have been offended—He will deliver no further punishments or warnings. Instead, He will directly destroy it. He will make it utterly disappear. This is God’s righteous disposition.

Previous Post Sodom’s Corruption: Infuriating to Man, Enraging to God
Next Post After Sodom’s Repeated Hostility and Resistance Toward Him, God Utterly Eradicates It

After Sodom’s Repeated Hostility and Resistance Toward Him, God Utterly Eradicates It

Now that we have a general understanding of God’s righteous disposition, we may return our attention to the city of Sodom—a place that God saw as a ci…

God’s treatment of the whole of humanity, foolish and ignorant as humanity is, is primarily based on mercy and tolerance. His wrath, on the other hand…

Gen 18:26 And Jehovah said, If I find in Sodom fifty righteous within the city, then I will spare all the place for their sakes. Gen 18:29 And he spo…

First, let us look at several passages of scripture which describe God’s destruction of Sodom. Gen 19:1–11 And there came two angels to Sodom at even…