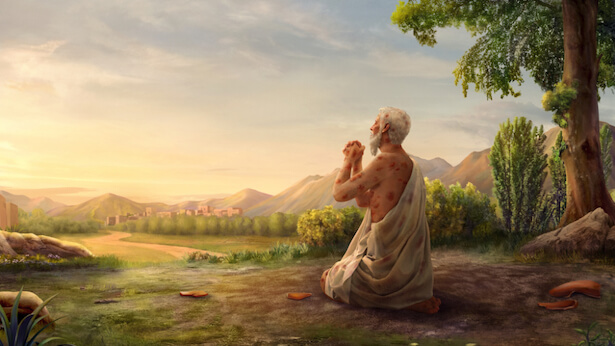 There is a fact which is never referred to in the Scriptures’ stories of Job, and this fact will be our focus today. Although Job had never seen God or heard the words of God with his own ears, God had a place in Job’s heart. What was Job’s attitude toward God? It was, as previously referred to, “blessed be the name of Jehovah.” His blessing of God’s name was unconditional, irrespective of context, and bound to no reason. We see that Job had given his heart to God, allowing it to be controlled by God; all that he thought, all that he decided, and all that he planned in his heart was laid open to God and not closed off from God. His heart did not stand in opposition to God, and he had never asked God to do anything for him or give him anything, and he did not harbor extravagant desires that he would gain anything from his worship of God. Job did not talk of trades with God, and made no requests or demands of God. His praising of God’s name was because of the great power and authority of God in ruling all things, and it was not dependent on whether he gained blessings or was struck by disaster. He believed that regardless of whether God blesses people or brings disaster upon them, God’s power and authority will not change, and thus, regardless of a person’s circumstances, God’s name should be praised. That man is blessed by God is because of God’s sovereignty, and when disaster befalls man, so, too, it is because of God’s sovereignty. God’s power and authority rule over and arrange everything about man; the vagaries of man’s fortune are the manifestation of God’s power and authority, and regardless of one’s viewpoint, God’s name should be praised. This is what Job experienced and came to know during the years of his life. All of Job’s thoughts and actions reached the ears of God and arrived before God, and were seen as important by God. God cherished this knowledge of Job, and treasured Job for having such a heart. This heart awaited God’s command always, and in all places, and no matter what the time or place it welcomed whatever befell him. Job made no demands of God. What he demanded of himself was to wait for, accept, face, and obey all of the arrangements that came from God; Job believed this to be his duty, and it was precisely what was wanted by God. Job had never seen God, nor heard Him speak any words, issue any commands, give any teachings, or instruct him of anything. In the words of today, for him to be able to possess such a knowledge and attitude toward God when God had given him no enlightenment, guidance, or provision with regard to the truth—this was precious, and for him to demonstrate such things was enough for God, and his testimony was commended and cherished by God. Job had never seen God or heard God personally utter any teachings to him, but to God his heart and he himself were far more precious than those people who, before God, were only able to talk in terms of deep theory, who were only able to boast, and speak of offering sacrifices, but who had never had a true knowledge of God, and had never truly feared God. For Job’s heart was pure, and not hidden from God, and his humanity was honest and kind-hearted, and he loved justice and that which was positive. Only a man like this who was possessed of such a heart and humanity was able to follow the way of God, and capable of fearing God and shunning evil. Such a man could see God’s sovereignty, could see His authority and power, and was able to achieve obedience to His sovereignty and arrangements. Only a man such as this could truly praise God’s name. That is because he did not look at whether God would bless him or bring disaster upon him, because he knew that everything is controlled by the hand of God, and that for man to worry is a sign of foolishness, ignorance, and irrationality, of doubt toward the fact of God’s sovereignty over all things, and of not fearing God. Job’s knowledge was precisely what God wanted. So, did Job have a greater theoretical knowledge of God than you? Because God’s work and utterances at that time were few, it was no easy matter to achieve the knowledge of God. Such an accomplishment by Job was no mean feat. He had not experienced the work of God, nor ever heard God speaking, nor seen the face of God. That he was able to have such an attitude toward God was entirely the result of his humanity and his personal pursuit, a humanity and pursuit that are not possessed by people today. Thus, in that age, God said, “There is none like him in the earth, a perfect and an upright man.” In that age, God had already made such an assessment of him, and had come to such a conclusion. How much more true would it be today?

Although most people now recognize that Job was perfect and upright and that he feared God and shunned evil, this recognition does not give them a gre…

By Mucheng, China At dusk, a grizzled old man was sitting among the ashes. His bare skin was covered with sore boils and these boils were festering …

Having learned of how Job went through the trials, most of you will likely want to know more details about Job himself, particularly with regard to th…

We all think the greatest blessing Job obtained is the double blessings. However, there’s even greater spiritual blessing that we don’t know than this one.