And it came to pass, that when Isaac was old, and his eyes were dim, so that he could not see, he called Esau his oldest son, and said to him, My son: and he said to him, Behold, here am I. And he said, Behold now, I am old, I know not the day of my death: Now therefore take, I pray you, your weapons, your quiver and your bow, and go out to the field, and take me some venison; And make me savoury meat, such as I love, and bring it to me, that I may eat; that my soul may bless you before I die. 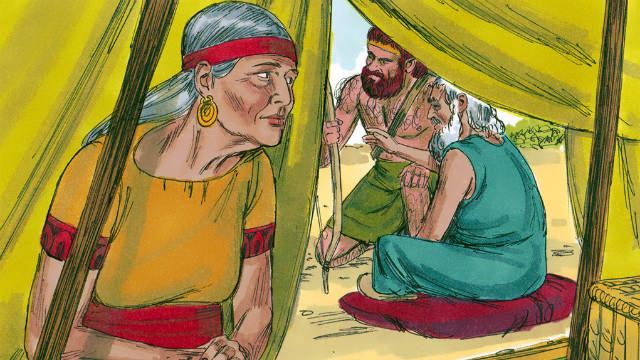 And Rebekah heard when Isaac spoke to Esau his son. And Esau went to the field to hunt for venison, and to bring it. And Rebekah spoke to Jacob her son, saying, Behold, I heard your father speak to Esau your brother, saying, Bring me venison, and make me savoury meat, that I may eat, and bless you before the LORD before my death. Now therefore, my son, obey my voice according to that which I command you. Go now to the flock, and fetch me from there two good kids of the goats; and I will make them savoury meat for your father, such as he loves: And you shall bring it to your father, that he may eat, and that he may bless you before his death. And Jacob said to Rebekah his mother, Behold, Esau my brother is a hairy man, and I am a smooth man: My father peradventure will feel me, and I shall seem to him as a deceiver; and I shall bring a curse on me, and not a blessing. And his mother said to him, On me be your curse, my son: only obey my voice, and go fetch me them. And he went, and fetched, and brought them to his mother: and his mother made savoury meat, such as his father loved. And Rebekah took goodly raiment of her oldest son Esau, which were with her in the house, and put them on Jacob her younger son: And she put the skins of the kids of the goats on his hands, and on the smooth of his neck: And she gave the savoury meat and the bread, which she had prepared, into the hand of her son Jacob. And he came to his father, and said, My father: and he said, Here am I; who are you, my son? 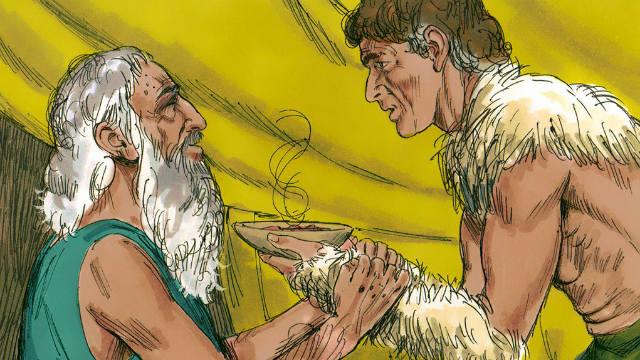 And Jacob said to his father, I am Esau your first born; I have done according as you bade me: arise, I pray you, sit and eat of my venison, that your soul may bless me. And Isaac said to his son, How is it that you have found it so quickly, my son? And he said, Because the LORD your God brought it to me. And Isaac said to Jacob, Come near, I pray you, that I may feel you, my son, whether you be my very son Esau or not. And Jacob went near to Isaac his father; and he felt him, and said, The voice is Jacob's voice, but the hands are the hands of Esau. And he discerned him not, because his hands were hairy, as his brother Esau's hands: so he blessed him. And he said, Are you my very son Esau? And he said, I am. And he said, Bring it near to me, and I will eat of my son's venison, that my soul may bless you. And he brought it near to him, and he did eat: and he brought him wine and he drank. And his father Isaac said to him, Come near now, and kiss me, my son. And he came near, and kissed him: and he smelled the smell of his raiment, and blessed him, and said, See, the smell of my son is as the smell of a field which the LORD has blessed: Therefore God give you of the dew of heaven, and the fatness of the earth, and plenty of corn and wine: Let people serve you, and nations bow down to you: be lord over your brothers, and let your mother's sons bow down to you: cursed be every one that curses you, and blessed be he that blesses you.

Jacob Returns to Bethel (Genesis 35:1-8) And God said to Jacob, Arise, go up to Bethel, and dwell there: and make there an altar to God, that appeared…

Jacob Prepares to Meet Esau （Genesis 32:1-32) And Jacob went on his way, and the angels of God met him. And when Jacob saw them, he said, This is God'…