And there was a famine in the land, beside the first famine that was in the days of Abraham. And Isaac went to Abimelech king of the Philistines to Gerar. And the LORD appeared to him, and said, Go not down into Egypt; dwell in the land which I shall tell you of: Sojourn in this land, and I will be with you, and will bless you; for to you, and to your seed, I will give all these countries, and I will perform the oath which I swore to Abraham your father; And I will make your seed to multiply as the stars of heaven, and will give to your seed all these countries; and in your seed shall all the nations of the earth be blessed; Because that Abraham obeyed my voice, and kept my charge, my commandments, my statutes, and my laws. 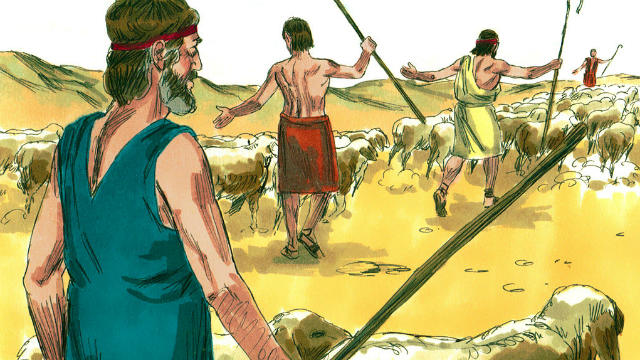 Then Isaac sowed in that land, and received in the same year an hundred times: and the LORD blessed him. And the man waxed great, and went forward, and grew until he became very great: For he had possession of flocks, and possession of herds, and great store of servants: and the Philistines envied him. For all the wells which his father's servants had dig in the days of Abraham his father, the Philistines had stopped them, and filled them with earth. And Abimelech said to Isaac, Go from us; for you are much mightier than we. And Isaac departed there, and pitched his tent in the valley of Gerar, and dwelled there.

The Bible story of Isaac Blesses Jacob and Jacob Deceives Isaac .Isaac blessed Jacob, and said, See, the smell of my son is as the smell of a field which the LORD has blessed: Therefore God give you of the dew of heaven

Jacob Prepares to Meet Esau （Genesis 32:1-32) And Jacob went on his way, and the angels of God met him. And when Jacob saw them, he said, This is God'…

Joseph's Leadership in Famine (Genesis 47:27-31) And Israel dwelled in the land of Egypt, in the country of Goshen; and they had possessions therein, …