How the Lord Will Knock at the Door Upon His Return

It is prophesied in the Book of Revelation: “Behold, I stand at the door, and knock: if any man hear My voice, and open the door, I will come in to him, and will sup with him, and he with Me” (Revelation 3:20). All true believers are looking forward to and eagerly awaiting the return of the Lord Jesus, and Xiangyang is no exception. However, he always failed to understand how the Lord would knock at the door when He returned. After seeking and discussion, he finally understood the mystery of the Lord knocking at the door.

Cheng’en said: “We all thought that the Lord Jesus would return coming with clouds and would knock on our door. Now it’s right before our eyes that disasters are becoming greater and greater—the prophecies of the Lord’s coming have basically been fulfilled, but we have yet to welcome Him. I’m pondering: Maybe He has appeared somewhere, but we just don’t know it. ...”

Xiangyang couldn’t even wait for her to finish before cutting in: “That’s so true. This has also been on my mind over these few days. It’s said that in the last days, with great glory the Lord will return with the clouds and that every eye will behold Him. However, since every man will see Him, need He knock at the door? The more I think about it, the more confused I feel. How on earth will He knock?”

Cheng’en said: “None of us were able to figure this out; I only understood after a sister shared fellowship on this during our gatherings over the last few days. All these years, we’ve been looking forward to the Lord’s return with the clouds, and this is in line with His words. But there isn’t just a single kind of prophecy about His return in the last days. Do you remember? He also prophesied: ‘And at midnight there was a cry made, Behold, the bridegroom comes; go you out to meet him’ (Matthew 25:6). And it is also prophesied in the Book of Revelation: ‘If therefore you shall not watch, I will come on you as a thief, and you shall not know what hour I will come on you’ (Revelation 3:3). ‘Behold, I stand at the door, and knock: if any man hear My voice, and open the door, I will come in to him, and will sup with him, and he with Me’ (Revelation 3:20). If the Lord really returns in the last days coming with the clouds just as we imagine, then how could these prophecies be fulfilled? How could He stand outside the door and knock?”

Xiangyang nodded again and again: “Yeah, if the Lord returns coming with the clouds and every man beholds Him, how could He come like a thief? But it’s written in chapter 1, verse 7 of the Book of Revelation: ‘Behold, He comes with clouds; and every eye shall see Him, and they also which pierced Him: and all kindreds of the earth shall wail because of Him. Even so, Amen.’ How on earth can these words be explained?”

Cheng’en said with a smile: “Actually, these prophecies aren’t contradictory at all. There’s truth to seek from within them. Those scriptures mentioned just now mean that there are two ways in which the Lord returns, that is, in secret and in public. He first returns secretly to work, and will then appear openly after completing a group of overcomers. During the time He is working in secret, if He knocks at our door but we don’t open it or welcome Him, we’ll be the ones who are weeping when He appears openly. Therefore, if we want to open the door and welcome Him when He knocks, first we must understand what is really meant by Him knocking at the door upon His return, and how He knocks. Otherwise, even if He knocks at our door, we’ll shut Him out due to our ignorance. Then we’d be likely to miss the opportunity of welcoming Him and being raptured into the kingdom of heaven!”

After hearing what she had to say, Xiangyang thought: It’s true—knowing how the Lord will knock at the door when He comes is incredibly important. The scriptures said that in order for the wise virgins to welcome the Lord, they would need to prepare sufficient oil. If we just foolishly wait, we’ll miss the opportunity to welcome Him, just as the foolish virgins did. Then we would really be weeping and gnashing our teeth! Xiangyang then said excitedly: “Yes, Cheng’en, you’re right. It’s really a mystery how the Lord will knock at the door when He returns, and there is truth to seek in it. There really is light in your fellowship! Thank the Lord. You didn’t attend those gatherings in vain! Tell me, regarding the Lord’s knocking when He returns, what does it actually mean? How does He knock at our door?”

Cheng’en continued on: “It is prophesied in the Book of Revelation: ‘He that has an ear, let him hear what the Spirit says to the churches’ (Revelation 2:7). And also chapter 16, verses 12-13 in the Gospel of John: ‘I have yet many things to say to you, but you cannot bear them now. However, when He, the Spirit of truth, is come, He will guide you into all truth: for He shall not speak of Himself; but whatever He shall hear, that shall He speak: and He will show you things to come.’ It can be seen from these words that the Lord Jesus hasn’t finished speaking, and that there will be more truth He’s going to utter when He returns in the last days. This is why He reminded us to pay attention and listen for His voice. Going back two thousand years when the Lord Jesus came to work, He often said: ‘Repent: for the kingdom of heaven is at hand’ (Matthew 4:17). He also performed many wonders and miracles, such as calming the wind and sea and allowing the lame to walk with a few words, as well as bringing Lazarus back from the dead…. His words carry authority and power and could not be uttered by any human being. Peter, John, Jacob, the woman of Samaria, Nathanael, and others recognized from the Lord Jesus’ words that He was the promised Messiah, thus they followed His footsteps and received His salvation. The Pharisees and ordinary Jews also heard the Lord Jesus’ words, but because they stubbornly clung to the literal prophecies of Old Testament scripture, they defined Him by their notions and imaginations and also refused to acknowledge that He was the coming Messiah. In the end, they not only lost His salvation but suffered His punishment for nailing Him to the cross and resisting Him—even their descendants were cursed by God. Therefore, we must learn from the failure of the Pharisees, and not measure or define God according to our imaginations. The Lord will not receive us on the clouds, nor will He actually come knock at the doors of our homes. Only if we focus on heeding His words and recognizing His voice can we welcome Him and attend the feast with Him. Just as it is written in the Book of Revelation: ‘Behold, I stand at the door, and knock: if any man hear My voice, and open the door, I will come in to him, and will sup with him, and he with Me’ (Revelation 3:20).”

While listening, Xiangyang thought all of this over and felt that everything she said was true. When the Lord Jesus was doing His work, the Pharisees and many ordinary Jews heard His words, but not only did they not accept it, but instead they blasphemed and condemned Him. However, Peter, John, and the woman of Samaria listened to His words and recognized that He was the promised Messiah, and so followed Him. They all heard the Lord Jesus’ words and beheld His work; some opened the door and accepted Him, while others sealed the door to their hearts and shut Him out. No wonder the Lord said: “My sheep hear My voice, and I know them, and they follow Me” (John 10:27). Xiangyang said excitedly: “Thank the Lord. I didn’t understand this until today’s fellowship. The returned Lord Jesus in the last days knocking at the door refers to His utterances to mankind. He uses His words to knock at the door of man’s heart. This is wonderful—now we’ve learnt how the Lord will knock at the door when He returns, so our hope of opening the door and welcoming Him is greater.”

Cheng’en said: “Yes. The Lord will use His words to knock at the door of our hearts when He returns, so now we really need to focus on listening for His voice. If we hear of someone preaching the words of the Holy Spirit to us, on the internet or on the radio, we should listen closely. Once we recognize the Lord’s voice, we should open the door for Him and accept His return. This is the only way we can be raptured before His throne and attend the feast of the Lamb. When the Lord knocks at the door, if we treat Him based on our own notions and imaginations just like the Pharisees and ordinary Jews, refusing to heed His call, we’ll forever miss the opportunity of welcoming Him and being raptured into the kingdom of heaven.” 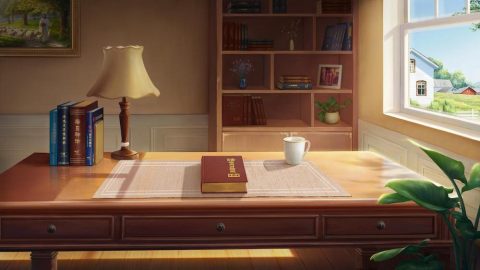 Jesus Will Come Like a Thief in the Night: How Will This Prophecy Come True?
Read More

Be Watchful and Be Ready
Previous The True Meaning of “the Coming of the Son of Man”
Next How Are the Prophecies of Jesus’ Second Coming Fulfilled?

Do You Know the Meaning of “Behold, I Stand at the Door, and Knock”?

“Behold, I stand at the door, and knock: if any man hear My voice, and open the door, I will come in to him, and will sup with him, and he with Me” (Revelation 3:20). From this prophecy about the Lord Jesus’ return in the last days, it can be seen that the Lord will […]

What Is the True Meaning of “Jesus Coming in Glory” in Matthew 24:30?

After a Bible study meeting, Pastor Huang left hurriedly, clutching the Bible under his arm. Several other co-workers and I began to talk about today’s meeting. Sister Li looked thoughtful and said: “Brothers and sisters, all these years we have been waiting to welcome the coming of the Lord. According to what the pastors say, […]

What Does the “Midnight” in Matthew 25:6 Refer To?

One summer evening, the weather being very sultry, people enjoying the cool occupied the benches of the park by ones and twos. Lisa strolled in the park alone, now raising her head and looking up at the sky, now bowing her head to think, with a face full of worry. Suddenly, finding three people standing […]

God’s sheep hear His voice, and only by hearing God’s voice can one meet the Lord returned