God’s treatment of the whole of humanity, foolish and ignorant as humanity is, is primarily based on mercy and tolerance. His wrath, on the other hand, is kept concealed for the vast majority of time and in the vast majority of events, and it is unknown to man. As a result, it is difficult for man to see God express His wrath, and it is also difficult to understand His wrath. As such, man makes light of God’s wrath. When man faces God’s final work and step of tolerance and forgiveness for man—that is, when God’s final instance of mercy and His final warning comes upon mankind—if people still use the same methods to oppose God and do not make any effort to repent, to mend their ways and accept His mercy, then God will no longer bestow His tolerance and patience upon them. On the contrary, God will retract His mercy at this time. Following this, He will only send forth His wrath. He can express His wrath in different ways, just as He can use different methods to punish and destroy people. 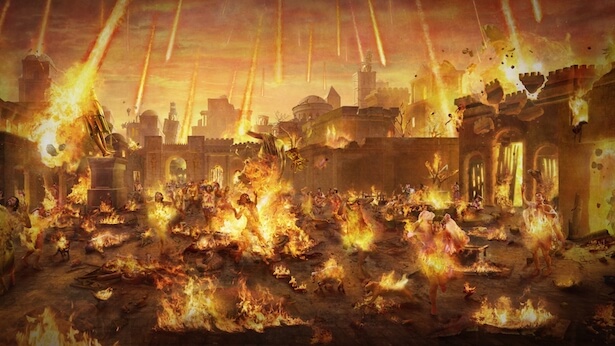 God’s use of fire to destroy the city of Sodom is His swiftest method of utterly annihilating a humanity or any other thing. Burning the people of Sodom destroyed more than their physical bodies; it destroyed the entirety of their spirits, their souls and their bodies, ensuring that the people inside the city would cease to exist in both the material world and the world that is invisible to man. This is one way in which God reveals and expresses His wrath. This manner of revelation and expression is one aspect of the substance of God’s wrath, just as it is naturally also a revelation of the substance of God’s righteous disposition. When God sends forth His wrath, He ceases to reveal any mercy or lovingkindness, nor does He display any more of His tolerance or patience; there is no person, thing or reason that can persuade Him to continue to be patient, to give His mercy again, to bestow His tolerance once more. In place of these things, without a moment’s hesitation, God sends forth His wrath and majesty, doing what He desires. He will do these things in a swift and clean manner in accordance with His own wishes. This is the way in which God sends forth His wrath and majesty, which man must not offend, and it is also an expression of one aspect of His righteous disposition. When people witness God showing concern and love toward man, they are unable to detect His wrath, see His majesty or feel His intolerance toward offense. These things have always led people to believe that God’s righteous disposition is one solely of mercy, tolerance and love. However, when one sees God destroy a city or detest a humanity, His rage in the destruction of man and His majesty allow people to glimpse the other side of His righteous disposition. This is God’s intolerance to offense. God’s disposition that tolerates no offense surpasses the imagination of any created being, and among the non-created beings, none is capable of interfering with it or affecting it; even less can it be impersonated or imitated. Thus, this aspect of God’s disposition is the one that humanity should know the most. Only God Himself has this kind of disposition, and only God Himself is possessed of this kind of disposition. God is possessed of this kind of righteous disposition because He detests wickedness, darkness, rebelliousness and Satan’s evil acts—corrupting and devouring mankind—because He detests all acts of sin in opposition to Him and because of His holy and undefiled substance. It is because of this that He will not suffer any of the created or non-created beings to openly oppose or contest Him. Even an individual to whom He had once shown mercy or whom He had chosen, need only provoke His disposition and transgress His principles of patience and tolerance, and God will unleash and reveal His righteous disposition that tolerates no offense without the least bit of mercy or hesitation.

God’s Disposition Wrath of God
Previous Post After Sodom’s Repeated Hostility and Resistance Toward Him, God Utterly Eradicates It
Next Post God’s Wrath Is a Safeguard for All the Forces of Justice and All Positive Things

David played the harp for Saul. So Saul was refreshed and well, and the evil spirit departed from him.

Jonah 4:11 - God’s Mercy and Tolerance Toward Humanity Are Flawless

And should not I spare Nineveh, that great city, wherein are more then six score thousand persons that cannot discern between their right hand and the…

And it came to pass as they came, when David was returned from the slaughter of the Philistine, that the women came out of all cities of Israel, singing and dancing,

By Chunyu God was pleased with King Solomon and bestowed incomparable abundance upon him. After Solomon was born, he received Jehovah God’s favor. Jus…