Is God’s Work Must Based on the Bible?

Some people say: “All God’s word and work is in the Bible. What you preach is beyond the Bible, so we cannot accept.” Some say: “Our belief in God must be in accordance with the Bible. Belief in God is belief in the Bible, and belief in the Bible is belief in God.” And some others say: “The Bible is the canon of the Christianity. For thousands of years, people have believed in the Lord based upon the Bible. If we depart from the Bible, then that’s not belief in the Lord and we cannot gain life.” As one of the members who are fortunate enough to accept Almighty God’s work of the last days, I’d like to seek and fellowship about the relationship between God’s work and the Bible with brothers and sisters. May we hold a humble and seeking heart toward Almighty God’s work of the last days. Because the Lord Jesus has told us long ago: “Blessed are they which do hunger and thirst after righteousness: for they shall be filled” (Matthew 5:6). “Blessed are the pure in heart: for they shall see God” (Mat 5:8).

Let’s look back: Before God created the heavens and earth and all things, there was no mankind or all things, let alone the Bible. At that time, on what basis did God do the work of creating the world? At the beginning of the Age of Law, mankind even didn’t know how to live. Not until Jehovah God guided them did they just come to know about it. Who could record the work God did in the Age of Law ahead of time? Wasn’t it recorded after God did the work? In the Age of Grace, there was only the Old Testament when the Lord came to work. Then what did God base His work of the Age of Grace upon? All those who are familiar with the Bible know that the New Testament wasn’t compiled until 300 years later after the Lord Jesus resurrected and ascended to heaven. So, before the New Testament existed, didn’t the Lord Jesus carry out His redemption work in the Age of Grace all the same? Let’s see Almighty God’s work and word in the last days. It is only referred to in the prophecy of Revelation. Referring to the prophecy, it means the work that has yet to be done by God and the word that has yet to be spoken. Can Almighty God’s work and word travel back and forth in time and be recorded in the Bible ahead of time? In our fellowship up to here, brothers and sisters, should we still believe that all of God’s word and work is recorded in the Bible? Still believe that betraying the Bible is fraudulent? And still believe all God’s work and word is in line with the Bible? In fact, the reason for this is because we worship the Bible or blindly trust it, and thus we have no place for God in our heart. In fact, much of Jehovah God’s and the Lord Jesus’ work is not recorded in the Bible. Just as apostle John said: “And there are also many other things which Jesus did, the which, if they should be written every one, I suppose that even the world itself could not contain the books that should be written” (John 21:25). 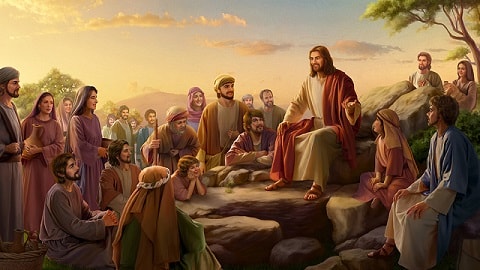 One day, I saw God’s words say: “Does doctrine need to be applied to the work of God? And must it be according to the foretellings of prophets? After all, which is greater: God or the Bible? Why must God’s work be according to the Bible? Could it be that God has no right to exceed the Bible? Can God not depart from the Bible and do other work? … You should know which came first, God or the Bible! Being the Lord of the Sabbath, could He not also be the Lord of the Bible?” Almighty God’s words speak very clearly: God comes first and then the Bible. God’s work precedes the records of God’s work. Just like what we talked above: From the creation of the world until Almighty God’s work in the last days, God doesn’t do every stage of His work according to the Bible, instead, God does His own work. Because it is the work of God Himself, God does whatever He wants to do. And God does His work without being restricted by any person, matter, or thing, because He is God Himself. We humans have no qualification to measure the work of God. The words of God say: “Put aside your view of ‘impossible’! The more that people believe something is impossible, the more likely it is to occur, for the wisdom of God soars higher than the heavens, God’s thoughts are higher than man’s thoughts, and the work of God transcends the limits of man’s thinking and conception. The more that something is impossible, the more there is the truth to be sought; the more that something is beyond the conception and imagination of man, the more it contains the will of God.” “The work of God is like mightily surging waves. No one can detain Him, and no one can halt His footsteps. Only those who listen carefully to His words, and who seek and thirst for Him, can follow His footsteps and receive His promise. Those who do not shall be subjected to overwhelming disaster and deserved punishment.”

Previous My Wrong Opinions About the Bible
Next Is There God’s Work and Words Outside the Bible?

By Wang Ying In 1982, I accepted the Lord Jesus’ gospel. Through reading the Bible, I knew that the Lord Jesus is the only true God and is the Lord w…

Why Do Almighty God’s Work and Word Exceed the Bible?

Hello Brother Xiaoyang, After your bearing witness to Almighty God’s work of the last days for me, I have watched many gospel movies, videos and song…

Are The Truths in the Bible Already Complete?

Question 2: The truths in the Bible are already complete. In believing in God, we have the Bible, and that’s enough. We don’t need the new word at all…

Is All of God’s Word Really in the Bible

By Siyu, China Han Zheng, sitting at her writing desk, was reading the word of the Lord Jesus softly, “My sheep hear my voice” (John 10:27). Then, she…