And the LORD said to Joshua, Fear not, neither be you dismayed: take all the people of war with you, and arise, go up to Ai: see, I have given into your hand the king of Ai, and his people, and his city, and his land: And you shall do to Ai and her king as you did to Jericho and her king: only the spoil thereof, and the cattle thereof, shall you take for a prey to yourselves: lay you an ambush for the city behind it. 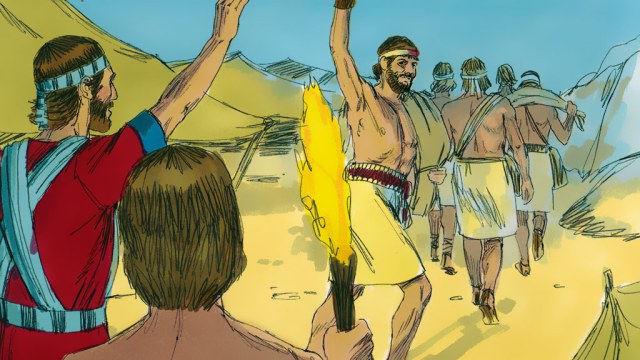 So Joshua arose, and all the people of war, to go up against Ai: and Joshua chose out thirty thousand mighty men of valor, and sent them away by night. And he commanded them, saying, Behold, you shall lie in wait against the city, even behind the city: go not very far from the city, but be you all ready: And I, and all the people that are with me, will approach to the city: and it shall come to pass, when they come out against us, as at the first, that we will flee before them, (For they will come out after us) till we have drawn them from the city; for they will say, They flee before us, as at the first: therefore we will flee before them. Then you shall rise up from the ambush, and seize on the city: for the LORD your God will deliver it into your hand. And it shall be, when you have taken the city, that you shall set the city on fire: according to the commandment of the LORD shall you do. See, I have commanded you. Joshua therefore sent them forth: and they went to lie in ambush, and stayed between Bethel and Ai, on the west side of Ai: but Joshua lodged that night among the people.

And Joshua rose up early in the morning, and numbered the people, and went up, he and the elders of Israel, before the people to Ai. And all the people, even the people of war that were with him, went up, and drew near, and came before the city, and pitched on the north side of Ai: now there was a valley between them and Ai. And he took about five thousand men, and set them to lie in ambush between Bethel and Ai, on the west side of the city. And when they had set the people, even all the host that was on the north of the city, and their liers in wait on the west of the city, Joshua went that night into the middle of the valley. And it came to pass, when the king of Ai saw it, that they hurried and rose up early, and the men of the city went out against Israel to battle, he and all his people, at a time appointed, before the plain; but he knew not that there were liers in ambush against him behind the city. And Joshua and all Israel made as if they were beaten before them, and fled by the way of the wilderness. And all the people that were in Ai were called together to pursue after them: and they pursued after Joshua, and were drawn away from the city. And there was not a man left in Ai or Bethel, that went not out after Israel: and they left the city open, and pursued after Israel. 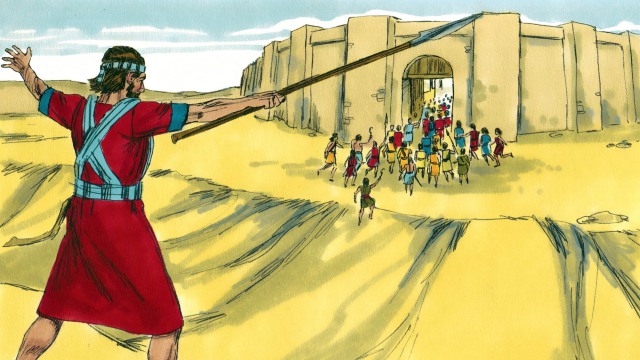 And the LORD said to Joshua, Stretch out the spear that is in your hand toward Ai; for I will give it into your hand. And Joshua stretched out the spear that he had in his hand toward the city. And the ambush arose quickly out of their place, and they ran as soon as he had stretched out his hand: and they entered into the city, and took it, and hurried and set the city on fire. And when the men of Ai looked behind them, they saw, and, behold, the smoke of the city ascended up to heaven, and they had no power to flee this way or that way: and the people that fled to the wilderness turned back on the pursuers. And when Joshua and all Israel saw that the ambush had taken the city, and that the smoke of the city ascended, then they turned again, and slew the men of Ai. And the other issued out of the city against them; so they were in the middle of Israel, some on this side, and some on that side: and they smote them, so that they let none of them remain or escape. And the king of Ai they took alive, and brought him to Joshua.

And it came to pass, when Israel had made an end of slaying all the inhabitants of Ai in the field, in the wilderness wherein they chased them, and when they were all fallen on the edge of the sword, until they were consumed, that all the Israelites returned to Ai, and smote it with the edge of the sword. And so it was, that all that fell that day, both of men and women, were twelve thousand, even all the men of Ai. For Joshua drew not his hand back, with which he stretched out the spear, until he had utterly destroyed all the inhabitants of Ai. Only the cattle and the spoil of that city Israel took for a prey to themselves, according to the word of the LORD which he commanded Joshua. And Joshua burnt Ai, and made it an heap for ever, even a desolation to this day. And the king of Ai he hanged on a tree until eventide: and as soon as the sun was down, Joshua commanded that they should take his carcass down from the tree, and cast it at the entering of the gate of the city, and raise thereon a great heap of stones, that remains to this day.

Jesus Calls Matthew (Matthew 9:9-13) 9And as Jesus passed forth from there, he saw a man, named Matthew, sitting at the receipt of custom: and he said to him, Follow me. And he arose, and followed him. 10And it came to pass, as Jesus sat at meat in the house, behold, many publicans and sinners […]

David Is Made King - Bible Story

Saul Envies David (1 Samuel 18：6-16) And it came to pass as they came, when David was returned from the slaughter of the Philistine, that the women came out of all cities of Israel, singing and dancing, to meet king Saul, with tabrets, with joy, and with instruments of music. And the women answered one […]

Do Not Judge – Matthew 7 (Matthew 7:1-6) Judge not, that you be not judged. For with what judgment you judge, you shall be judged: and with what measure you mete, it shall be measured to you again.  And why behold you the mote that is in your brother’s eye, but consider not the beam […]