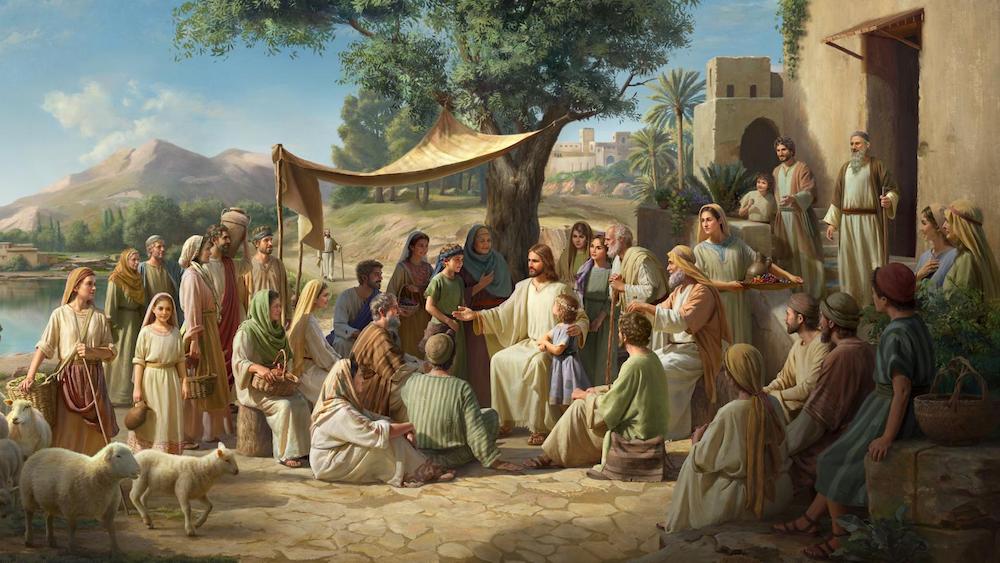 Later, on a website I saw these words, “The first is the parable of the sower. This is a very interesting parable; sowing seeds is a common event in people’s lives. The second is the parable of the tares. Anyone who has planted crops, and certainly all adults, will know what ‘tares’ are. The third is the parable of the mustard seed. All of you know what mustard is, do you not? If you do not know, you can take a look in the Bible. The fourth parable is the parable of the leaven. Now, most people know that leaven is used for fermentation, and that it is something that people use in their daily lives. The further parables, including the sixth, the parable of the treasure; the seventh, the parable of the pearl; and the eighth, the parable of the net, were all drawn and sourced from people’s real lives. What kind of picture do these parables paint? It is a picture of God becoming a normal person and living alongside mankind, using the language of life, human language, to communicate with humans and to provide them with what they need. When God became flesh and lived among mankind for a long time, after He had experienced and witnessed people’s various lifestyles, these experiences became His teaching material through which He transformed His divine language into human language. Of course, these things that He saw and heard in life also enriched the Son of man’s human experience. When He wanted people to understand some truths, to understand some of God’s will, then He could use parables similar to the ones above to tell people about God’s will and His requirements of mankind. These parables were all related to people’s lives; there was not a single one that was out of touch with human lives. When the Lord Jesus lived with mankind, He saw farmers tending their fields, and He knew what tares were and what leavening was; He understood that humans love treasure, so He used the metaphors of both the treasure and the pearl.” “This was the advantage of God becoming flesh: He could take advantage of mankind’s knowledge and use human language to speak to people, and to express His will. He explained or ‘translated’ to man His profound, divine language that people struggled to understand in human language, in a human way. This helped people understand His will and know what He wanted to do.”

From these words I understood that the reason the Lord Jesus spoke many parables when He worked, was to allow His followers to better understand God’s intentions and His different requirements of people, so that they would worship Him with heart and honesty. In the Age of Law, Jehovah God used prophets to convey His words to man, but those words were all prophecies and the followers at that time were unable to directly understand the meaning of them. Even today, we are still incapable of clearly figuring out many prophecies of the prophets. This is the truth. When the Lord Jesus was incarnated as the Son of man to work on earth and used human language to tell people the intentions and requirements of God, we could better understand and grasp the truth in His words, and it helped us know His work and disposition and understand all the pain and effort of His salvation of mankind. Just as the Lord Jesus used the parable of the lost sheep to express His love for mankind—God wants every person to be saved, and does not want anyone to perish. As long as one is a true believer, even if he takes the wrong path temporarily, God will strive to rescue him. Such purpose of the Lord Jesus speaking in human language to allow us to better understand His requirements, fulfills the words in the Bible, “That it might be fulfilled which was spoken by the prophet, saying, I will open my mouth in parables; I will utter things which have been kept secret from the foundation of the world” (Matthew 13:35). This is the second aspect of significance of why the Lord Jesus spoke parables when He worked.

I went on reading, “He could also have conversations with people from the human perspective, using human language, and communicate with people in a way they understood. He could even speak and work using human language and knowledge so that people could feel God’s kindness and closeness, so that they could see His heart.” From these words I understood that when the Lord Jesus was working and preaching, He spoke the parables using human language, for they are easy to understand and they could allow us to feel God’s kindness and loveliness and bring us closer to Him. Think back to the Age of Law: When God didn’t become flesh to do His work, He spoke to Moses out of the burning bush; He spoke to the Israelites on Mount Sinai; He spoke to Job in the wind. At that time when people heard God speaking, they felt fearful and dared not to confront Him or get close to Him, much less could they quiet their hearts to seek the meaning of His words. However, in the Age of Grace, God incarnate used human language to do His work and preach, teaching people to understand His way by using parables, which allowed us to feel that God is no longer unapproachable to us or the One who let us stand in awe, and to feel God’s consideration and kindness to us so that we can—face-to-face—seek His intentions, accept His work and leading, and gain His redemption. This is the third aspect of significance of why the Lord Jesus spoke parables when He worked.

From God’s work we can see that God became flesh to express the truth and used human language to speak to us mankind for the purpose that we can more easily know His intentions and requirements and understand and practice the truth, and thus we can cast off our corrupt disposition, be cleansed and changed, and become the ones who know God, obey God, and worship God. Thank God. All the Glory be to God!

Previous Jesus Was Sinless but Why Did He Still Receive Baptism?
Next 3 Root Problems of the Jews’ Resisting Jesus Christ

From Jesus' Feeding of the 5000, What Else Can We Know Besides God’s Great Power?

There is a record in the Bible, “One of His disciples, Andrew, Simon Peter’s brother, said to Him, There is a lad here, which has five barley loaves, and two small fishes: but what are they among so many? And Jesus said, Make the men sit down. Now there was much grass in the place. […]

In chapter 3, verses 13–17 of Matthew, they read: “Then comes Jesus from Galilee to Jordan to John, to be baptized of him. But John forbade him, saying, I have need to be baptized of you, and come you to me? And Jesus answering said to him, Suffer it to be so now: for thus […]

Why Did the Lord Jesus Call God in Heaven Father?

In the past, I saw the Bible recorded, “And Jesus, when he was baptized, went up straightway out of the water: and, see, the heavens were opened to him, and he saw the Spirit of God descending like a dove, and lighting on him: And see a voice from heaven, saying, This is my beloved […]

Each of our brothers and sisters who believes in the Lord Jesus knows that the Lord Jesus did the work of redeeming humanity in the Age of Grace. He not only bestowed compassion and tolerance upon us, teaching us to be tolerant and patient and to repent and confess, but also manifested many miracles, such […]