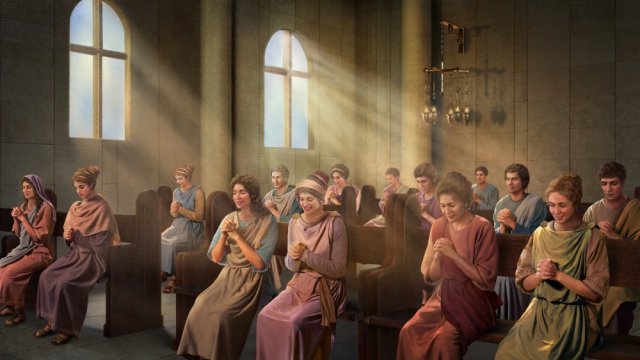 1. We should not rely on notions and imaginations, but should have reverence for God.

On the matter of watching and waiting for the coming of the Lord, we can’t rely on our notions and imaginations but ought to have reverence for God. In the past, while the Pharisees waited for the coming of the Messiah, they were not reverent before God, just living in their notions and imaginations. Their main manifestations are that they explained the prophecies of the coming of the Messiah according to their own imaginations, and that they believed based on the literal meaning of the prophecies that God could only come with the name Messiah, be born in the palace and aristocracy, and be the King of the Jews. But when the Lord came with the name Jesus and was born in an ordinary family of carpenters, the Pharisees concluded that He was definitely not the Messiah they hoped for. In addition, they held the thought that the Messiah should appear to them and work in the temple rather than preach among the lower classes, such as tax collectors and fishermen. The Pharisees lived in their notions and imaginations; they resisted and condemned the Messiah while waiting for His coming. They insisted on their own notions and imaginations, blindly condemned the arrival of God, and finally colluded with the Roman government to nail the Lord to the cross, seriously offending God’s disposition. Therefore, we must not follow in the footsteps of the Pharisees in the matter of waiting for the Lord’s coming and cannot use our own notions and imaginations to judge that God should come like this or that, because the appearance and work of the Lord is so unpredictable and wise that we will never be able to see through the mystery contained within. Just as Jehovah God said, “For my thoughts are not your thoughts, neither are your ways my ways, said Jehovah. For as the heavens are higher than the earth, so are my ways higher than your ways, and my thoughts than your thoughts” (Isaiah 55:8-9).

2. We should take the initiative to seek and investigate the true way.

The Lord Jesus said, “And at midnight there was a cry made, Behold, the bridegroom comes; go you out to meet him” (Matthew 25:6). From the words of the Lord, we can know that what the Lord means is that as long as someone outside says “the Bridegroom comes,” we should take the initiative to seek and investigate. In this way, we are truly watching and waiting. Some people think that if they only uphold the name of the Lord, often pray and read the Bible and work hard for the Lord, then they are watching and waiting. But in fact, this is waiting for the Lord blindly and passively and not seeking actively. Consequently, when someone preaches that the Lord has returned, they will not take the initiative to seek and investigate, thus missing the opportunity to welcome the Lord’s return. So we should be wise virgins: When hearing someone outside says “the Bridegroom comes,” we should take the initiative to seek and investigate, which is in line with the will of the Lord. For those who welcomed the coming of the Messiah, like Peter, John, Nathanael and others, they met the Lord by seeking, investigating, and gaining the enlightenment and illumination of the Holy Spirit. When the disciple Peter heard his brother Andrew say, “We have found the Messias” (John 1:41), he could follow Andrew to see the Lord Jesus, and finally followed the Lord Jesus and received the Lord’s salvation. So when someone testifies the Lord has returned to speak and do work, it is vital for us to seek and investigate actively.

3. We should pay attention to seeking the voice of God.

In regard to this aspect, there are many prophecies in Revelation, like “He that has an ear, let him hear what the Spirit says to the churches” (Revelation 2:7). The Lord Jesus also clearly told us, “I have yet many things to say to you, but you cannot bear them now. However, when he, the Spirit of truth, is come, he will guide you into all truth: for he shall not speak of himself; but whatever he shall hear, that shall he speak: and he will show you things to come” (John 16:12-13). From the words of God, we can be certain that God will speak more words when He comes back. It is especially important for a wise virgin to seek the voice of God. Just as the Lord Jesus said, “Behold, I stand at the door, and knock: if any man hear my voice, and open the door, I will come in to him, and will sup with him, and he with me” (Revelation 3: 20). By pondering and investigating the new words of God, we can recognize the words that the Holy Spirit speaks to the churches, which means that God’s sheep hear the voice of God. Therefore, we should pay attention to seeking the voice of God when waiting for the coming of the Lord, otherwise, we can’t recognize Him even if He has come.

In the Age of Grace, for the disciples who followed the Lord, they heard the Lord’s words and preaching, obtaining the enlightenment and illumination of the Holy Spirit. They felt that the Lord’s words were full of authority, power, and the truth, and were spoken by God Himself, and thus they recognized that the Lord Jesus was the coming of the Messiah and followed the Lord. Take Nathanael for example: He recognized that the Lord Jesus is the Messiah and God Himself by listening to the Lord’s words. Just as the Bible says: “Nathanael said to him, From where know you me? Jesus answered and said to him, Before that Philip called you, when you were under the fig tree, I saw you. Nathanael answered and said to him, Rabbi, you are the Son of God; you are the King of Israel” (John 1:48-49). However, those Pharisees and scribes didn’t pay attention to seeking the voice of the Lord, but resisted and condemned the Lord, so they were ultimately destined to have nothing to do with God’s salvation.

Therefore, watching and waiting requires us to have reverence for God in our hearts. We should not use our notions and imaginations to define God’s work. Once we hear the news of the Lord’s return, we should take the initiative to seek and investigate the voice of the Lord. This is what the wise virgins should do to welcome the return of the Lord.

How Will the Lord Jesus Return? 2 Ways Mentioned in the Bible

Editor’s note: As for how the Lord will return in the last days, the religious community has long had many differing opinions. Most Christians believe…

By Qingxin, United States Wondering Whether I Was a Wise Virgin Long ago, I saw many pastors say online, “We are in Lord the last days, and many bibli…

By Zhengdao, Germany The Lord Jesus said: “For there shall arise false Christs, and false prophets, and shall show great signs and wonders; so that, i…

Do You Know the Secret to Welcoming the Lord’s Return?

By Guo Jin One morning in early summer, a fiery red sun rose from the east. After breakfast, Zhao Yu remembered that she had made an appointment with…