The Birth of Jacob and Esau - Bible Story

And these are the generations of Isaac, Abraham's son: Abraham begat Isaac: And Isaac was forty years old when he took Rebekah to wife, the daughter of Bethuel the Syrian of Padanaram, the sister to Laban the Syrian. And Isaac entreated the LORD for his wife, because she was barren: and the LORD was entreated of him, and Rebekah his wife conceived. And the children struggled together within her; and she said, If it be so, why am I thus? And she went to inquire of the LORD. And the LORD said to her, Two nations are in your womb, and two manner of people shall be separated from your bowels; and the one people shall be stronger than the other people; and the elder shall serve the younger. 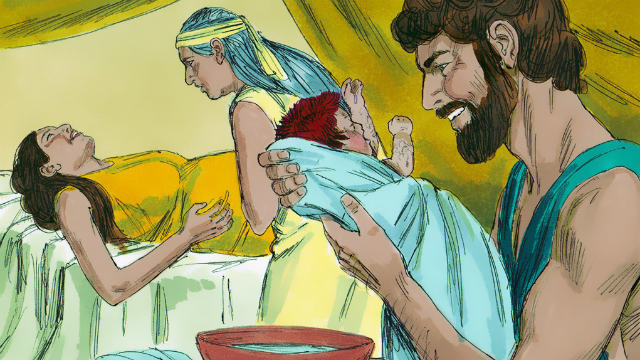 And when her days to be delivered were fulfilled, behold, there were twins in her womb. And the first came out red, all over like an hairy garment; and they called his name Esau. And after that came his brother out, and his hand took hold on Esau's heel; and his name was called Jacob: and Isaac was three score years old when she bore them.

Esau Sells his Birthright Bible Story tells the story of Esau sells his birthright.Esau came from the field, and he was faint,Esau said, Behold, I am at the point to die,and what profit shall this birthright do to me? he did eat and drink, and rose up and he sold his birthright to Jacob.

It is a night to be much observed to the LORD for bringing them out from the land of Egypt: this is that night of the LORD to be observed of all the children of Israel in their generations.