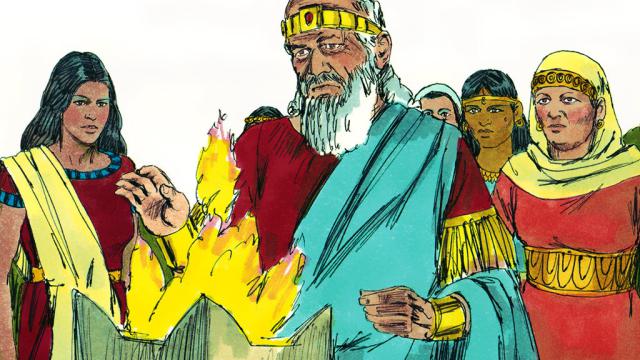 But king Solomon loved many strange women, together with the daughter of Pharaoh, women of the Moabites, Ammonites, Edomites, Zidonians, and Hittites: Of the nations concerning which the LORD said to the children of Israel, You shall not go in to them, neither shall they come in to you: for surely they will turn away your heart after their gods: Solomon joined to these in love. And he had seven hundred wives, princesses, and three hundred concubines: and his wives turned away his heart. For it came to pass, when Solomon was old, that his wives turned away his heart after other gods: and his heart was not perfect with the LORD his God, as was the heart of David his father. For Solomon went after Ashtoreth the goddess of the Zidonians, and after Milcom the abomination of the Ammonites. And Solomon did evil in the sight of the LORD, and went not fully after the LORD, as did David his father. Then did Solomon build an high place for Chemosh, the abomination of Moab, in the hill that is before Jerusalem, and for Molech, the abomination of the children of Ammon. And likewise did he for all his strange wives, which burnt incense and sacrificed to their gods.

And the LORD was angry with Solomon, because his heart was turned from the LORD God of Israel, which had appeared to him twice, And had commanded him concerning this thing, that he should not go after other gods: but he kept not that which the LORD commanded. Why the LORD said to Solomon, For as much as this is done of you, and you have not kept my covenant and my statutes, which I have commanded you, I will surely rend the kingdom from you, and will give it to your servant. Notwithstanding in your days I will not do it for David your father’s sake: but I will rend it out of the hand of your son. However, I will not rend away all the kingdom; but will give one tribe to your son for David my servant’s sake, and for Jerusalem’s sake which I have chosen.

Solomon Judges Wisely (1 Kings 3:16-28) Then came there two women, that were harlots, to the king, and stood before him. And the one woman said, O my …

David and Bathsheba (2 Samuel 11:1-13) And it came to pass, after the year was expired, at the time when kings go forth to battle, that David sent Jo…

David Renews His Oath to Bathsheba

Abishag Cares for David (1 Kings 1:1-4) Now king David was old and stricken in years; and they covered him with clothes, but he got no heat. Why his s…

Jonathan Warns David (1 Samuel 19:1-7) And Saul spoke to Jonathan his son, and to all his servants, that they should kill David. But Jonathan Saul's s…
9:18