Then came there two women, that were harlots, to the king, and stood before him. And the one woman said, O my lord, I and this woman dwell in one house; and I was delivered of a child with her in the house. And it came to pass the third day after that I was delivered, that this woman was delivered also: and we were together; there was no stranger with us in the house, save we two in the house. And this woman’s child died in the night; because she overlaid it. And she arose at midnight, and took my son from beside me, while your handmaid slept, and laid it in her bosom, and laid her dead child in my bosom. And when I rose in the morning to give my child suck, behold, it was dead: but when I had considered it in the morning, behold, it was not my son, which I did bear. And the other woman said, No; but the living is my son, and the dead is your son. And this said, No; but the dead is your son, and the living is my son. Thus they spoke before the king. 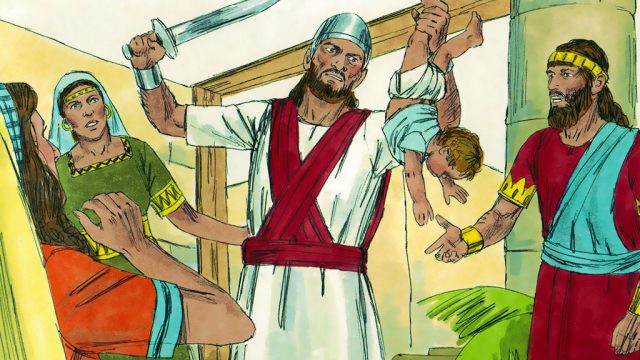 And Solomon had twelve officers over all Israel, which provided victuals for the king and his household: each man his month in a year made provision. And these are their names: The son of Hur, in mount Ephraim: The son of Dekar, in Makaz, and in Shaalbim, and Bethshemesh, and Elonbethhanan: The son of Hesed, in Aruboth; to him pertained Sochoh, and all the land of Hepher: The son of Abinadab, in all the region of Dor; which had Taphath the daughter of Solomon to wife: Baana the son of Ahilud; to him pertained Taanach and Megiddo, and all Bethshean, which is by Zartanah beneath Jezreel, from Bethshean to Abelmeholah, even to the place that is beyond Jokneam: The son of Geber, in Ramothgilead; to him pertained the towns of Jair the son of Manasseh, which are in Gilead; to him also pertained the region of Argob, which is in Bashan, three score great cities with walls and brazen bars: Ahinadab the son of Iddo had Mahanaim: Ahimaaz was in Naphtali; he also took Basmath the daughter of Solomon to wife: Baanah the son of Hushai was in Asher and in Aloth: Jehoshaphat the son of Paruah, in Issachar: Shimei the son of Elah, in Benjamin: Geber the son of Uri was in the country of Gilead, in the country of Sihon king of the Amorites, and of Og king of Bashan; and he was the only officer which was in the land.

Judah and Israel were many, as the sand which is by the sea in multitude, eating and drinking, and making merry.

And Solomon reigned over all kingdoms from the river to the land of the Philistines, and to the border of Egypt: they brought presents, and served Solomon all the days of his life.

And Solomon’s provision for one day was thirty measures of fine flour, and three score measures of meal, Ten fat oxen, and twenty oxen out of the pastures, and an hundred sheep, beside harts, and roebucks, and fallow deer, and fatted fowl. For he had dominion over all the region on this side the river, from Tiphsah even to Azzah, over all the kings on this side the river: and he had peace on all sides round about him. And Judah and Israel dwelled safely, every man under his vine and under his fig tree, from Dan even to Beersheba, all the days of Solomon. And Solomon had forty thousand stalls of horses for his chariots, and twelve thousand horsemen. And those officers provided victual for king Solomon, and for all that came to king Solomon’s table, every man in his month: they lacked nothing. Barley also and straw for the horses and dromedaries brought they to the place where the officers were, every man according to his charge.

And God gave Solomon wisdom and understanding exceeding much, and largeness of heart, even as the sand that is on the sea shore. And Solomon’s wisdom excelled the wisdom of all the children of the east country, and all the wisdom of Egypt. For he was wiser than all men; than Ethan the Ezrahite, and Heman, and Chalcol, and Darda, the sons of Mahol: and his fame was in all nations round about. And he spoke three thousand proverbs: and his songs were a thousand and five. And he spoke of trees, from the cedar tree that is in Lebanon even to the hyssop that springs out of the wall: he spoke also of beasts, and of fowl, and of creeping things, and of fishes. And there came of all people to hear the wisdom of Solomon, from all kings of the earth, which had heard of his wisdom.

Let us look at Genesis 22:17–18. This is another passage spoken by Jehovah God, in which He said to Abraham, “That in blessing I will bless you, and i…

Who Made My Family Shattered

After he believed in God, the CCP has never stopped its persecution on his family. His family has been separated from each other for over 20 years. In his painful experience, he tasted that God’s love accompanies him at all times.

God Is the Only One Man Can Truly Rely Upon

Introduction In our real lives, we often encounter many difficulties and problems. When this happens, some people choose to rely on themselves to solv…

Blessed are they which are persecuted for righteousness' sake: for theirs is the kingdom of heaven. Matthew 5:10 Thoughts on Today’s Verse… The pro…