And the children of Israel did evil in the sight of the LORD: and the LORD delivered them into the hand of Midian seven years. And the hand of Midian prevailed against Israel: and because of the Midianites the children of Israel made them the dens which are in the mountains, and caves, and strong holds. And so it was, when Israel had sown, that the Midianites came up, and the Amalekites, and the children of the east, even they came up against them; And they encamped against them, and destroyed the increase of the earth, till you come to Gaza, and left no sustenance for Israel, neither sheep, nor ox, nor ass. For they came up with their cattle and their tents, and they came as grasshoppers for multitude; for both they and their camels were without number: and they entered into the land to destroy it. And Israel was greatly impoverished because of the Midianites; and the children of Israel cried to the LORD.

And it came to pass, when the children of Israel cried to the LORD because of the Midianites, That the LORD sent a prophet to the children of Israel, which said to them, Thus said the LORD God of Israel, I brought you up from Egypt, and brought you forth out of the house of bondage; And I delivered you out of the hand of the Egyptians, and out of the hand of all that oppressed you, and drove them out from before you, and gave you their land; And I said to you, I am the LORD your God; fear not the gods of the Amorites, in whose land you dwell: but you have not obeyed my voice. 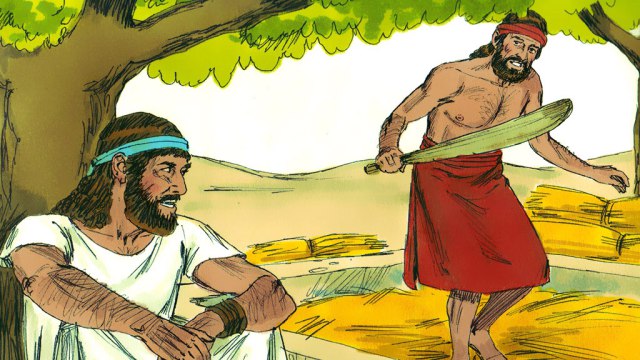 And there came an angel of the LORD, and sat under an oak which was in Ophrah, that pertained to Joash the Abiezrite: and his son Gideon threshed wheat by the wine press, to hide it from the Midianites. And the angel of the LORD appeared to him, and said to him, The LORD is with you, you mighty man of valor. And Gideon said to him, Oh my Lord, if the LORD be with us, why then is all this befallen us? and where be all his miracles which our fathers told us of, saying, Did not the LORD bring us up from Egypt? but now the LORD has forsaken us, and delivered us into the hands of the Midianites. And the LORD looked on him, and said, Go in this your might, and you shall save Israel from the hand of the Midianites: have not I sent you? And he said to him, Oh my Lord, with which shall I save Israel? behold, my family is poor in Manasseh, and I am the least in my father’s house. And the LORD said to him, Surely I will be with you, and you shall smite the Midianites as one man.

And he said to him, If now I have found grace in your sight, then show me a sign that you talk with me. Depart not hence, I pray you, until I come to you, and bring forth my present, and set it before you. And he said, I will tarry until you come again. 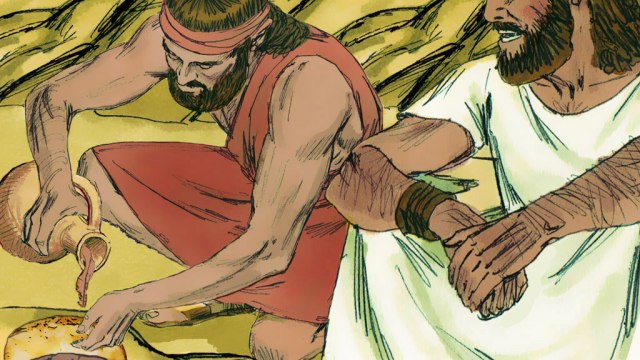 Then Gideon built an altar there to the LORD, and called it Jehovahshalom: to this day it is yet in Ophrah of the Abiezrites.

And it came to pass the same night, that the LORD said to him, Take your father’s young bullock, even the second bullock of seven years old, and throw down the altar of Baal that your father has, and cut down the grove that is by it: And build an altar to the LORD your God on the top of this rock, in the ordered place, and take the second bullock, and offer a burnt sacrifice with the wood of the grove which you shall cut down. Then Gideon took ten men of his servants, and did as the LORD had said to him: and so it was, because he feared his father’s household, and the men of the city, that he could not do it by day, that he did it by night.

And when the men of the city arose early in the morning, behold, the altar of Baal was cast down, and the grove was cut down that was by it, and the second bullock was offered on the altar that was built. And they said one to another, Who has done this thing? And when they inquired and asked, they said, Gideon the son of Joash has done this thing. Then the men of the city said to Joash, Bring out your son, that he may die: because he has cast down the altar of Baal, and because he has cut down the grove that was by it. And Joash said to all that stood against him, Will you plead for Baal? will you save him? he that will plead for him, let him be put to death whilst it is yet morning: if he be a god, let him plead for himself, because one has cast down his altar. Therefore on that day he called him Jerubbaal, saying, Let Baal plead against him, because he has thrown down his altar. 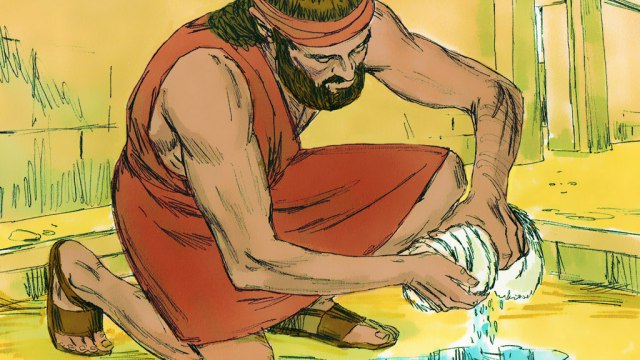 Then Jerubbaal, who is Gideon, and all the people that were with him, rose up early, and pitched beside the well of Harod: so that the host of the Midianites were on the north side of them, by the hill of Moreh, in the valley.

And the LORD said to Gideon, The people that are with you are too many for me to give the Midianites into their hands, lest Israel vaunt themselves against me, saying, My own hand has saved me. Now therefore go to, proclaim in the ears of the people, saying, Whoever is fearful and afraid, let him return and depart early from mount Gilead. And there returned of the people twenty and two thousand; and there remained ten thousand.

And the LORD said to Gideon, The people are yet too many; bring them down to the water, and I will try them for you there: and it shall be, that of whom I say to you, This shall go with you, the same shall go with you; and of whomsoever I say to you, This shall not go with you, the same shall not go. So he brought down the people to the water: and the LORD said to Gideon, Every one that laps of the water with his tongue, as a dog laps, him shall you set by himself; likewise every one that bows down on his knees to drink. And the number of them that lapped, putting their hand to their mouth, were three hundred men: but all the rest of the people bowed down on their knees to drink water. And the LORD said to Gideon, By the three hundred men that lapped will I save you, and deliver the Midianites into your hand: and let all the other people go every man to his place. So the people took victuals in their hand, and their trumpets: and he sent all the rest of Israel every man to his tent, and retained those three hundred men: and the host of Midian was beneath him in the valley.

And it came to pass the same night, that the LORD said to him, Arise, get you down to the host; for I have delivered it into your hand. But if you fear to go down, go you with Phurah your servant down to the host: And you shall hear what they say; and afterward shall your hands be strengthened to go down to the host. Then went he down with Phurah his servant to the outside of the armed men that were in the host. And the Midianites and the Amalekites and all the children of the east lay along in the valley like grasshoppers for multitude; and their camels were without number, as the sand by the sea side for multitude. And when Gideon was come, behold, there was a man that told a dream to his fellow, and said, Behold, I dreamed a dream, and, see, a cake of barley bread tumbled into the host of Midian, and came to a tent, and smote it that it fell, and overturned it, that the tent lay along. And his fellow answered and said, This is nothing else save the sword of Gideon the son of Joash, a man of Israel: for into his hand has God delivered Midian, and all the host.

And it was so, when Gideon heard the telling of the dream, and the interpretation thereof, that he worshipped, and returned into the host of Israel, and said, Arise; for the LORD has delivered into your hand the host of Midian. And he divided the three hundred men into three companies, and he put a trumpet in every man’s hand, with empty pitchers, and lamps within the pitchers. And he said to them, Look on me, and do likewise: and, behold, when I come to the outside of the camp, it shall be that, as I do, so shall you do. When I blow with a trumpet, I and all that are with me, then blow you the trumpets also on every side of all the camp, and say, The sword of the LORD, and of Gideon.

Next, let us read the first sentence of Genesis 1:9–11: “And God said, Let the waters under the heaven be gathered together to one place, and let the …

Let us look at the first passage: “And God said, Let there be light: and there was light. And God saw the light, that it was good: and God divided the…

Imperceptibly, the Creator’s work of making all things had continued for five days, immediately following which the Creator welcomed the sixth day of …

The Creator used His words to accomplish His plan, and in this way He passed the first three days of His plan. During these three days, God was not se…
9:18