And the LORD said to Moses, Go in to Pharaoh: for I have hardened his heart, and the heart of his servants, that I might show these my signs before him: And that you may tell in the ears of your son, and of your son’s son, what things I have worked in Egypt, and my signs which I have done among them; that you may know how that I am the LORD.

And Moses and Aaron came in to Pharaoh, and said to him, Thus said the LORD God of the Hebrews, How long will you refuse to humble yourself before me? let my people go, that they may serve me. Else, if you refuse to let my people go, behold, to morrow will I bring the locusts into your coast: And they shall cover the face of the earth, that one cannot be able to see the earth: and they shall eat the residue of that which is escaped, which remains to you from the hail, and shall eat every tree which grows for you out of the field: And they shall fill your houses, and the houses of all your servants, and the houses of all the Egyptians; which neither your fathers, nor your fathers’ fathers have seen, since the day that they were on the earth to this day. And he turned himself, and went out from Pharaoh. And Pharaoh’s servants said to him, How long shall this man be a snare to us? let the men go, that they may serve the LORD their God: know you not yet that Egypt is destroyed? And Moses and Aaron were brought again to Pharaoh: and he said to them, Go, serve the LORD your God: but who are they that shall go? And Moses said, We will go with our young and with our old, with our sons and with our daughters, with our flocks and with our herds will we go; for we must hold a feast to the LORD. And he said to them, Let the LORD be so with you, as I will let you go, and your little ones: look to it; for evil is before you. Not so: go now you that are men, and serve the LORD; for that you did desire. And they were driven out from Pharaoh’s presence.

And the LORD said to Moses, Stretch out your hand over the land of Egypt for the locusts, that they may come up on the land of Egypt, and eat every herb of the land, even all that the hail has left. And Moses stretched forth his rod over the land of Egypt, and the LORD brought an east wind on the land all that day, and all that night; and when it was morning, the east wind brought the locusts. And the locust went up over all the land of Egypt, and rested in all the coasts of Egypt: very grievous were they; before them there were no such locusts as they, neither after them shall be such. For they covered the face of the whole earth, so that the land was darkened; and they did eat every herb of the land, and all the fruit of the trees which the hail had left: and there remained not any green thing in the trees, or in the herbs of the field, through all the land of Egypt. Then Pharaoh called for Moses and Aaron in haste; and he said, I have sinned against the LORD your God, and against you. Now therefore forgive, I pray you, my sin only this once, and entreat the LORD your God, that he may take away from me this death only. And he went out from Pharaoh, and entreated the LORD. And the LORD turned a mighty strong west wind, which took away the locusts, and cast them into the Red sea; there remained not one locust in all the coasts of Egypt. But the LORD hardened Pharaoh’s heart, so that he would not let the children of Israel go.

Egyptian Pharaoh hardened his heart, trying every possible means to hinder the Israelites from leaving Egypt. However, God’s authority is supreme; He sent down ten plagues on Egypt and led the Israelites to cross the Red Sea safely by miracles, to enter the good land of Canaan in the end. It can be seen that no one can hinder the thing God wishes to accomplish. 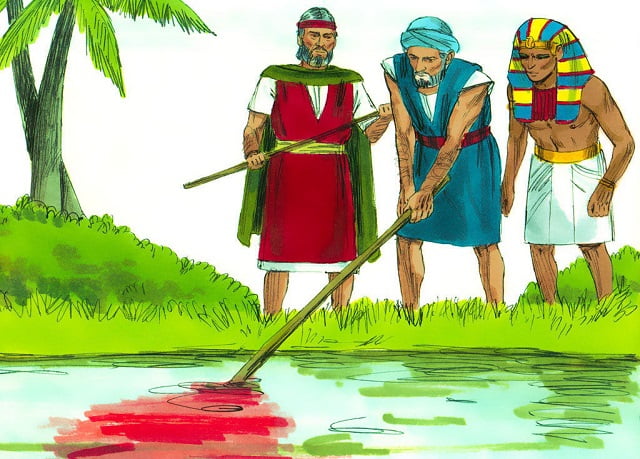