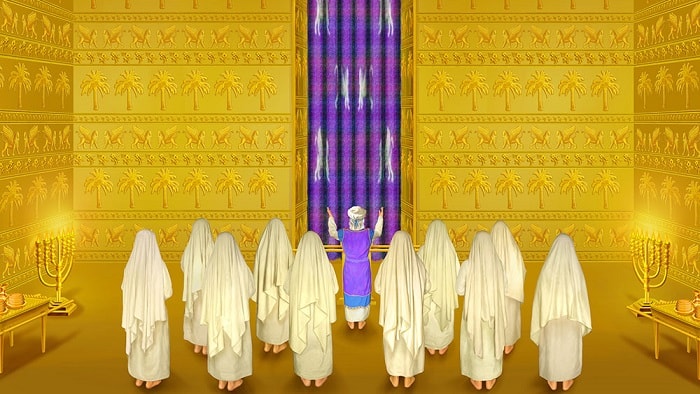 Think back to how those priests, scribes, and the Pharisees served God in the temple throughout the year. They were familiar with the Bible and were well versed in the law. They burned incense, offered sacrifices, made prayers, interpreted scriptures and preached in the temple, and even traveled over land and sea, toiling and laboring for spreading the gospel. They were admired by people for their suffering, but why did the Lord Jesus condemn and curse them? The Lord Jesus said, “Why do you also transgress the commandment of God by your tradition? For God commanded, saying, Honor your father and mother: and, He that curses father or mother, let him die the death. But you say, Whoever shall say to his father or his mother, It is a gift, by whatever you might be profited by me; And honor not his father or his mother, he shall be free. Thus have you made the commandment of God of none effect by your tradition. You hypocrites, well did Esaias prophesy of you, saying, This people draws near to me with their mouth, and honors me with their lips; but their heart is far from me. But in vain they do worship me, teaching for doctrines the commandments of men” (Matthew 15:3-9). “Woe to you, scribes and Pharisees, hypocrites! for you compass sea and land to make one proselyte, and when he is made, you make him twofold more the child of hell than yourselves” (Matthew 23:15). “But woe to you, scribes and Pharisees, hypocrites! for you shut up the kingdom of heaven against men: for you neither go in yourselves, neither suffer you them that are entering to go in” (Matthew 23:13). Pondering over the Lord’s words, I knew that the Pharisees traveled far and wide spreading the gospel, but they didn’t preach God’s laws or commandments but their ancestors’ traditions, which was essentially abandoning God’s commandments. They passionately worked hard and paid a price not for loving God or obeying God, and not for leading people to walk in God’s way or worship God, much less for exalting or testifying to God. Instead, they exalted and testified to themselves to make others worship them through preaching their ancestors’ traditions. So, in the toil and labor of the Pharisees were full of personal aims and goals. When the Lord Jesus came to do His new work, His sermons and work were warmly welcomed by the people and many people followed Him. While the Pharisees were feared of losing their place in people’s hearts. For the sake of maintaining their statuses and jobs, they resisted and condemned the Lord Jesus frenziedly, and even colluded with the Roman government to crucify Him, which revealed their nature of hating the truth and their substance of antichrists. That is why the Lord Jesus cursed them and condemned them as hypocrites. Their pursuit decided the way they walked was a way of resisting God. So, their toil and labor didn’t bring them into the kingdom of heaven. Quite the opposite: They were subject to God’s righteous punishment.

Thus, one cannot enter the kingdom of heaven by expending and running around outwardly, for what God wants is man’s true heart. About the standard of entering the kingdom of heaven, the Lord Jesus also said, “Not every one that said to me, Lord, Lord, shall enter into the kingdom of heaven; but he that does the will of my Father which is in heaven. Many will say to me in that day, Lord, Lord, have we not prophesied in your name? and in your name have cast out devils? and in your name done many wonderful works? And then will I profess to them, I never knew you: depart from me, you that work iniquity” (Matthew 7:21-23). The Lord Jesus told us clearly that only those who do the will of the heavenly Father can enter into the kingdom of heaven, but He didn’t say one who works hard for Him can. People who can spend for the Lord according to His requirements, practice His words and obey His commandments, and love Him with their heart, their soul, their mind, without resistance and betrayal, are ones who follow God’s will. Just like what the Lord Jesus said, “You shall love the Lord your God with all your heart, and with all your soul, and with all your mind. This is the first and great commandment. And the second is like to it, You shall love your neighbor as yourself” (Matthew 22:37-39). Following God’s will doesn’t lie in how many sacrifices one makes or how many hardships one endures outwardly, or in how he is pious, but in that he possesses reverence and obedience of God in doing everything. People expend for God for loving Him, caring for Him and satisfying Him, without personal intentions; they can put aside their own profits and extravagant desires, no longer consider their own future prospects, and fulfill God’s commission wholeheartedly; they can exalt and testify to God in their work, not working for their status and reputation; when God’s word and work don’t align with their notions, they don’t define or judge them with their conceptions and imaginations but obey and accept them; no matter what trials and tribulations they encounter: the death’s drawing near or being jailed and tortured…, they all obey God’s orchestrations and arrangements without their own choice. Only such people are worthy to enter into God’s kingdom.

Let’s think about those apostles and prophets approved by God. They all not only worked and ran around for the Lord, but more than that, they could put God’s words into practice, obey His words, submit to and accept whatever He did, without their own term or reason. In the end, they gained the approval of God. For example, Peter followed the Lord Jesus all his life, pursued to love God, focused on practicing the Lord’s words, cared for His will and satisfied Him in all things. He didn’t go after future prospects and fate for himself, but endured all sufferings for loving God. Even being crucified, he could still obey unto death. He bore resounding testimony to God before Satan, receiving God’s approval. Or as another example, Abraham. When God’s trial, that he was asked to offer his only son to God, came upon him, he could endure the suffering and give up what he loved to satisfy and obey God even though God’s requirement made him very painful. As he followed God’s way, he finally was commended by God. There is also Job. In the trial of losing all, extremely grieved, he still followed God’s way, not sinning with his lips. He was called by God a person fearing God and shunning evil. The reason why they could stand firm in these great trials was because they had a heart of bearing sufferings, denying themselves, forsaking the flesh to love and satisfy God. They all lived out the testimony of following God’s way, so they gained God’s approval.

Obviously, only if people pursue the truth, practice God’s words, live the reality of God’s words and carry out His will can they enter the kingdom of heaven. If they only work hard, but cannot obey God’s will and haven’t cast off their corrupt disposition to become holy, not being the ones who love, obey and worship God, then never shall they enter the kingdom of heaven.

Will We Be Raptured Into God’s Kingdom Upon the Second Coming of the Lord?

By Wang Zhen It is said in the Bible, “For with the heart man believes to righteousness; and with the mouth confession is made to salvation” (Romans …

Can People Who Are Baptized Be Saved Into the Heavenly Kingdom?

August 27 Dear Sister Wang: Peace to you in the Lord! I’m very glad to receive your letter. In your letter you say: “I’ve always believed that we be…

Christian Movie Trailer “The People of the Heavenly Kingdom”: How to Enter the Kingdom of Heaven

Introduction: The Lord Jesus said, “Truly I say to you, Except you be converted, and become as little children, you shall not enter into the kingdom o…

Saved by Faith And We Can Enter God's Kingdom?

Are we saved by faith, justified by faith, and saved by grace, and all able to enter the kingdom of God? They got the answer from the debate today.