And the time drew near that Israel must die: and he called his son Joseph, and said to him, If now I have found grace in your sight, put, I pray you, your hand under my thigh, and deal kindly and truly with me; bury me not, I pray you, in Egypt: But I will lie with my fathers, and you shall carry me out of Egypt, and bury me in their burial plot. And he said, I will do as you have said. And he said, Swear to me. And he swore to him. And Israel bowed himself on the bed's head.

The Death of Jacob

Mourning and Burial for Jacob 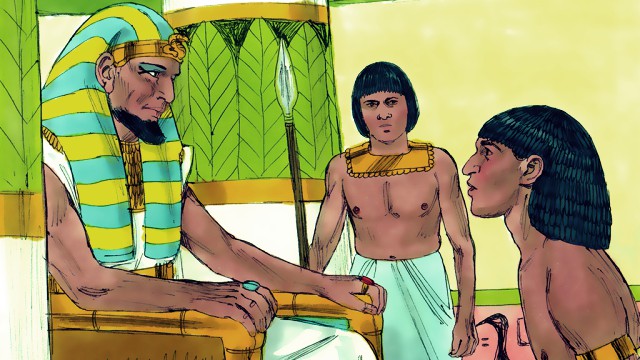 And when the days of his mourning were past, Joseph spoke to the house of Pharaoh, saying, If now I have found grace in your eyes, speak, I pray you, in the ears of Pharaoh, saying, My father made me swear, saying, See, I die: in my grave which I have dig for me in the land of Canaan, there shall you bury me. Now therefore let me go up, I pray you, and bury my father, and I will come again. And Pharaoh said, Go up, and bury your father, according as he made you swear.

And Joseph went up to bury his father: and with him went up all the servants of Pharaoh, the elders of his house, and all the elders of the land of Egypt, And all the house of Joseph, and his brothers, and his father's house: only their little ones, and their flocks, and their herds, they left in the land of Goshen. And there went up with him both chariots and horsemen: and it was a very great company. And they came to the threshing floor of Atad, which is beyond Jordan, and there they mourned with a great and very sore lamentation: and he made a mourning for his father seven days. And when the inhabitants of the land, the Canaanites, saw the mourning in the floor of Atad, they said, This is a grievous mourning to the Egyptians: why the name of it was called Abelmizraim, which is beyond Jordan.

And his sons did to him according as he commanded them: For his sons carried him into the land of Canaan, and buried him in the cave of the field of Machpelah, which Abraham bought with the field for a possession of a burial plot of Ephron the Hittite, before Mamre. And Joseph returned into Egypt, he, and his brothers, and all that went up with him to bury his father, after he had buried his father.

Jacob's Journey to Egypt (Genesis 46:1-7) Sweet Publishing / FreeBibleimages.org CC BY-SA 3.0 And Israel took his journey with all that he had, and …

The Birth of Jacob and Esau - Bible Story

And these are the generations of Isaac, Abraham's son: Abraham begat Isaac: And Isaac was forty years old when he took Rebekah to wife, the daughter of Bethuel the Syrian of Padanaram,