God is holy. What He says has always come true. God hates treacherous people, and love honest people. The Pharisees of the Age of Grace are hypocritical. They did not fear God in their heart, and beyond that they didn’t respect God above all others. They obviously knew the commandment that “You shall not bear false witness against your neighbor”, but they disregard the commandments of God, publicly bearing false witness to convict and even kill the prophets and righteous people who were sent by God. They directly resist God. Through the Pharisee’s failure, we ought to be vigilant to avoid doing something which is an offense against the disposition of God. Also we should treat all the things carefully, especially for the Lord Jesus’ second coming. We shouldn’t give up the opportunity to gain the truth just for fearing of being deceived. Don’t listen to rumors without discernment so that we may not be cheated by the evil servant. Don’t be like the Jews, who were cheated by the Pharisees, did not accept and obey the Lord Jesus’ work and became eternal sinners for they crucified the Lord Jesus with the Pharisees. The following are some scriptures about not allowing to bear false witness: 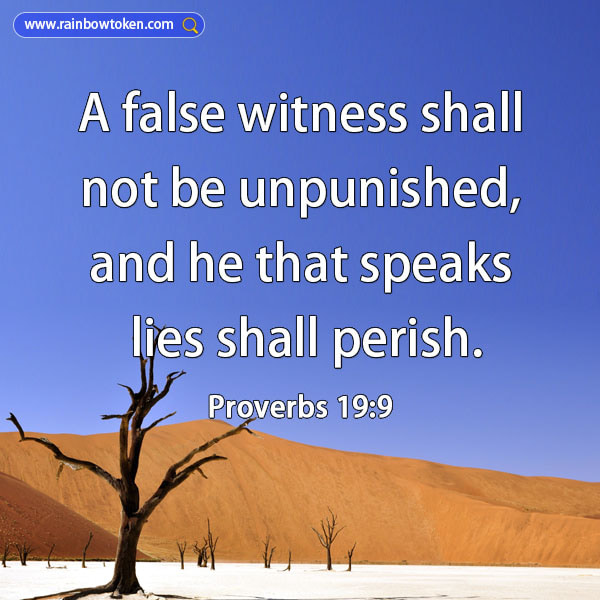 Exodus 20:16 You shall not bear false witness against your neighbor.

And the judges shall make diligent inquisition: and, behold, if the witness be a false witness, and has testified falsely against his brother; Then shall you do to him, as he had thought to have done to his brother: so shall you put the evil away from among you.

He that speaks truth shows forth righteousness: but a false witness deceit.

A false witness shall not be unpunished, and he that speaks lies shall perish.

Neither shall you bear false witness against your neighbor.

You know the commandments, Do not commit adultery, Do not kill, Do not steal, Do not bear false witness, Defraud not, Honor your father and mother.

A false witness that speaks lies, and he that sows discord among brothers.

A false witness shall perish: but the man that hears speaks constantly.

Previous 19 Bible Verses About Sin You Should Know

If we don’t teach our children to follow Christ, the world will teach them not to, for “the whole world lies in wickedness” (1 John 5:19). So teaching…

Now disasters are occurring frequently and becoming greater and greater all over the world. These signs indicate that the great tribulation in the las…

Revelation 3:19 As many as I love, I rebuke and chasten: be zealous therefore, and repent. John 15:9-10 As the Father has loved me, so have I loved y…

Bible Verses About the Second Coming — 6 Things to Know

The Lord Jesus prophesied that He would return in the last days to rapture us into the heavenly kingdom. For 2,000 years, believers in the Lord have b…