Who Is the Lord Jesus? Why Did He Call God in Heaven the Father When He Prayed?

After receiving grace and returning to the Lord, we read in Matthew 3:17 in the Bible, “And see a voice from heaven, saying, This is my beloved Son, in whom I am well pleased.” Also, when the Lord Jesus preached to the disciples, He also called God in heaven the Father, saying when He prayed in Gethsemane, “O my Father,” which makes us think that the Lord is the Son, and this is what all who follow the Lord Jesus have thought over the past two thousand years. But some brothers and sisters also read in the Bible that when Philip asked the Lord Jesus to make the Father appear to them, the Lord Jesus said to Philip, “Have I been so long time with you, and yet have you not known me, Philip? he that has seen me has seen the Father; and how say you then, Show us the Father? Believe you not that I am in the Father, and the Father in me? the words that I speak to you I speak not of myself: but the Father that dwells in me, he does the works” (John 14:9–10). Also, “I and My Father are one” (John 10:30). So, some of our brothers and sisters are confused, “Since the Lord Jesus is God’s beloved Son, why does the Lord say, ‘I am in the Father, and the Father in me’ and ‘I and My Father are one’? Here it seems like the Lord is telling us that He is God Himself, and that the Father and the Son are inseparable, so is the Lord Jesus God’s Son or God Himself?” Let’s fellowship about this question today. 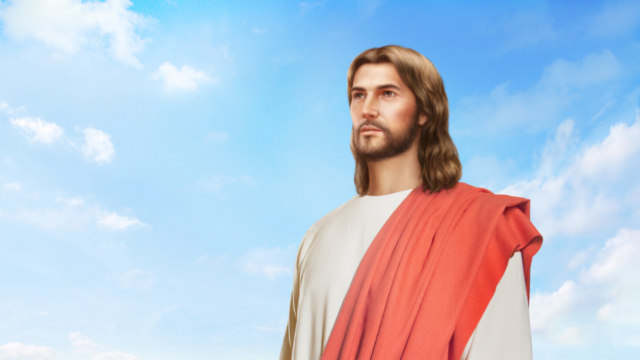 The Origin of the Concept of the Father and the Son

Is the Idea of the Father and the Son True?

Why Did the Lord Jesus Call God in Heaven the Father When He Prayed?

Perhaps some brothers and sisters will ask, “Even if the Lord Jesus was God Himself, when the Lord Jesus prayed, why did He pray to the Father?” Let’s read a passage that addresses this question, “When Jesus called God in heaven by the name of Father as He prayed, this was done only from the perspective of a created man, only because the Spirit of God had put on an ordinary and normal flesh and had the exterior cover of a created being. Even if within Him was the Spirit of God, His exterior appearance was still that of an ordinary man; in other words, He had become the ‘Son of man’ of which all men, including Jesus Himself, spoke. Given that He is called the Son of man, He is a person (whether man or woman, in any case one with the exterior shell of a human being) born into a normal family of ordinary people. Therefore, Jesus calling God in heaven by the name of Father was the same as how you at first called Him Father; He did so from the perspective of a man of creation. Do you still remember the Lord’s Prayer that Jesus taught you to memorize? ‘Our Father in heaven….’ He asked all man to call God in heaven by the name of Father. And since He too called Him Father, He did so from the perspective of one who stands on an equal footing with you all. Since you called God in heaven by the name of Father, this shows that Jesus saw Himself to be on equal footing with you, and as a man on earth chosen by God (that is, the Son of God). If you call God ‘Father,’ is this not because you are a created being? However great the authority of Jesus on earth, prior to the crucifixion, He was merely a Son of man, governed by the Holy Spirit (that is, God), and one of the earth’s created beings, for He had yet to complete His work. Therefore, His calling God in heaven Father was solely His humility and obedience. His addressing God (that is, the Spirit in heaven) in such a manner, however, does not prove that He is the Son of the Spirit of God in heaven. Rather, it is simply that His perspective is different” (“Does the Trinity Exist?”).

From this passage, we can see that when the Lord Jesus prayed and called God in heaven the Father, He was merely speaking from the perspective of a created being, which is to say mankind’s perspective, but this does not prove that the Lord Jesus is the Son of God’s Spirit in heaven. Before He was crucified, His identity was the Son of man, He had normal humanity, and His appearance was that of an ordinary person. He lived a normal life, He ate, drank, and wore clothes, and was not supernatural at all. Therefore, the Lord Jesus prayed to God from the perspective of a created being, which perfectly demonstrates the humbleness and obedience of the Lord Jesus Christ. But no matter what tone or form of address the Lord Jesus used in His prayers, His essence was still that of God Himself controlled by the Holy Spirit. He had normal humanity and also complete divinity. Especially when the Lord was formally working, when He was speaking or performing miracles, He was entirely controlled by the Holy Spirit. As God He could express the entirety of the truth, express God’s disposition and all that God has and is, give people the truth, the way, and the life, reveal the mysteries of heaven, which is to say that God in heaven was doing His own work in the incarnate flesh. This is an undeniable fact.

Why Did God in Heaven Testify That the Lord Jesus Was His Beloved Son?

Perhaps some brothers and sisters will also ask, “If the Lord Jesus wasn’t God’s Son, how can we explain the fact that in Matthew 3:17, it says ‘This is my beloved Son, in whom I am well pleased’?” Let’s look at another passage, “There are still those who say, ‘Did not God expressly state that Jesus was His beloved Son?’ Jesus is the beloved Son of God, in whom He is well pleased—this was certainly spoken by God Himself. That was God bearing witness to Himself, but merely from a different perspective, that of the Spirit in heaven bearing witness to His own incarnation. Jesus is His incarnation, not His Son in heaven. Do you understand? Do not the words of Jesus, ‘I am in the Father, and the Father in me,’ indicate that They are one Spirit? And is it not because of the incarnation that They were separated between heaven and earth? In reality, They are still one; no matter what, it is simply God bearing witness to Himself. … But at that time, the Spirit in heaven stated only that He was the beloved Son of God, and made no mention of His being the only Son of God. This simply did not happen. How could God have an only child? Then would God not have become man? Because He was the incarnation, He was called the beloved Son of God, and, from this, came the relationship between Father and Son. It was simply because of the separation between heaven and earth” (“Does the Trinity Exist?”).

From this passage, we can understand that when the Holy Spirit testified “This is my beloved Son,” it was God speaking from the perspective of the Spirit testifying that He had incarnated as the Son of man. He was testifying Himself. At the time, all people knew of God as a Spirit, so if the Holy Spirit directly testified that the incarnate Lord Jesus was God, it would have been hard for people to accept. Also, when people first came in contact with the incarnate God, they had very little understanding of God’s incarnation and could never have imagined that this ordinary-seeming Son of man was the incarnation of God’s Spirit, the appearance of the incarnate God. Even after the Lord Jesus spoke many words, did much work, revealed many of God’s signs and miracles, and thoroughly demonstrated God’s authority and power, people still weren’t able to recognize from His words and work that He was God Himself, the appearance of God, and instead merely said the Lord Jesus was John the Baptist, or Elijah, or the Master. So, based on people’s spiritual stature at the time, God testified that the Lord Jesus was His beloved Son, and temporarily allowed people to think of the Lord Jesus as God’s Son, which was both in accord with man’s notions and easy for people to accept. Because the Lord Jesus did the work of redeeming mankind at the time, it didn’t matter what people called God, as long as they accepted the Lord Jesus as the Savior and had their sins forgiven, and thus were qualified to enjoy God’s grace. So, the fact that the Holy Spirit testified that the Lord Jesus was God’s beloved Son was based on the era’s historical background, and on the spiritual stature and ignorance of people at the time. In this, we can see God’s tolerance of our weakness, as well as God’s good intentions in His salvation for us, and God’s love for us. Consider: If we think of the Lord Jesus as God’s Son, doesn’t that imply that we think of God in heaven as a person?

Thanks be to God for His guidance! May God be with us, Amen!

Why Did the Lord Jesus Pray to God in Heaven Since He Is God?

The Son of Man
Previous Post Knowing Jesus Christ: The Lord Jesus’ Disposition Is Not Just Merciful and Loving
Next Post Jesus’ Miracle: Why Did Jesus Allow Lazarus’ Resurrection

The Lord Jesus Christ Is God Himself

by Zhang Li One morning, when my daughter and I were studying the Bible together, we saw these verses: “Philip said to him, Lord, show us the Father…

How Will Jesus Return in the Last Days: 2 Ways

We Christians all know that when the Lord Jesus descends for the second time, He will receive us so that we can be with Him. This is the promise that …

By Wu Wen, Italy Many brothers and sisters in the Lord eagerly wait for the Lord to return and think that the Lord will come in His resurrected spiri…

Does the Trinity Exist?

It was only after the truth of Jesus become flesh came to be that man realized this: It is not only the Father in heaven, but also the Son, and even t…
9:18