The Creator’s Sincere Feelings Toward Mankind

People often say that it is not an easy thing to know God. However, I say that knowing God is not a difficult matter at all, for God frequently displays His deeds for man to see. God has never ceased His dialogue with mankind, and He has never concealed Himself from man, and nor has He hidden Himself. His thoughts, His ideas, His words and His deeds are all revealed to mankind. Therefore, so long as man wishes to know God, he can come to understand and know Him through all sorts of means and methods. The reason why man blindly thinks that God has intentionally avoided him, that God has intentionally hidden Himself from humanity, that God has no intention of allowing man to understand and know Him, is because he does not know who God is and nor does he wish to understand God. Even more than that, man does not concern himself with the Creator’s thoughts, words or deeds…. Truthfully speaking, if a person just uses their spare time to focus upon and understand the Creator’s words or deeds, and if they pay just a little attention to the Creator’s thoughts and the voice of His heart, it will not be difficult for that person to realize that the Creator’s thoughts, words, and deeds are visible and transparent. Likewise, it will take little effort to realize that the Creator is among man at all times, that He is always in conversation with man and the entirety of creation, and that He is performing new deeds every day. His substance and disposition are expressed in His dialogue with man; His thoughts and ideas are revealed completely in His deeds; He accompanies and observes mankind at all times. He speaks quietly to mankind and all of creation with His silent words: “I am in the heavens, and I am amongst My creation. I am keeping watch; I am waiting; I am at your side….” His hands are warm and strong; His footsteps are light; His voice is soft and graceful; His form passes and turns, embracing all of mankind; His countenance is beautiful and gentle. He has never left, never vanished. Day and night, He is mankind’s constant companion, never to leave their side. His devoted care and special affection for humanity, as well as His true concern and love for man, were displayed bit by bit as He saved the city of Nineveh. In particular, the exchange between Jehovah God and Jonah fully revealed the Creator’s tenderness for the mankind He Himself created. Through those words, you can obtain a deep understanding of God’s sincere feelings for humanity …

The following passage was recorded in the Book of Jonah 4:10–11: “Then said Jehovah, You have had pity on the gourd, for the which you have not labored, neither made it grow; which came up in a night, and perished in a night: And should not I spare Nineveh, that great city, wherein are more than six score thousand persons that cannot discern between their right hand and their left hand; and also much cattle?” These are the actual words of Jehovah God, recorded from a conversation between God and Jonah. Though this exchange is brief, it brims with the Creator’s care for mankind and His reluctance to give mankind up. These words express the true attitude and feelings that God holds within His heart for His creation. Through these words, which are clear and precise such as are rarely heard by man, God states His true intentions for humanity. This exchange represents an attitude God held toward the people of Nineveh—but what kind of attitude is it? It is the attitude He held toward the people of Nineveh before and after their repentance, and the attitude with which He treats mankind. Within these words are His thoughts and His disposition.

What thoughts of God are revealed in these words? If you pay attention to the details as you read, it will not be difficult for you to notice that He uses the word “pity”; the use of this word shows God’s true attitude toward mankind.

On the level of literal meaning, people can interpret the word “pity” in different ways: First, it means “to love and protect, to feel tenderness toward something”; second, it means “to love dearly”; and finally, it means “to be unwilling to hurt something and to be unable to bear doing so.” In short, this word implies tender affection and love, as well as an unwillingness to give up someone or something; it implies God’s mercy and tolerance toward man. God used this word, which is a word commonly spoken by men, and yet it is also able to lay bare the voice of God’s heart and His attitude toward mankind.

Although the city of Nineveh was filled with people just as corrupt, evil and violent as those of Sodom, their repentance caused God to have a change of heart and decide not to destroy them. Because the way they treated God’s words and instructions demonstrated an attitude that starkly contrasted with that of the citizens of Sodom, and because of their honest submission to God and honest repentance for their sins, as well as their true and heartfelt behavior in all regards, God once more expressed His own heartfelt pity and bestowed it upon them. What God bestows upon humanity and His pity for humanity are impossible for anyone to duplicate, and it is impossible for any person to possess God’s mercy, His tolerance, or His sincere feelings toward humanity. Is there anyone whom you deem a great man or woman, or even a superhuman, who would, from a high point, speaking as a great man or woman, or upon the highest point, make this kind of statement to mankind or to creation? Who amongst mankind can know the state of human life like the palm of their hands? Who can bear the burden and responsibility for humanity’s existence? Who is qualified to proclaim the destruction of a city? And who is qualified to pardon a city? Who can say that they cherish their own creation? Only the Creator! Only the Creator has tenderness toward this mankind. Only the Creator shows this mankind compassion and affection. Only the Creator holds a true, unbreakable affection for this mankind. Likewise, only the Creator can bestow mercy on this mankind and cherish all of His creation. His heart leaps and aches at every one of man’s actions: He is angered, distressed and grieved over man’s evil and corruption; He is pleased, joyful, forgiving and jubilant for man’s repentance and belief; every single one of His thoughts and ideas exists for and revolves around mankind; what He is and has is expressed entirely for mankind’s sake; the entirety of His emotions are intertwined with mankind’s existence. For mankind’s sake, He travels and rushes about; He silently gives forth every bit of His life; He dedicates every minute and second of His life…. He has never known how to pity His own life, yet He has always cherished the mankind He Himself created…. He gives all that He has to this humanity…. He grants His mercy and tolerance unconditionally and without expectation of recompense. He does this only so that mankind can continue to survive before His eyes, receiving His provision of life. He does this only so that mankind may one day submit before Him and recognize that He is the One who nourishes man’s existence and supplies the life of all creation. 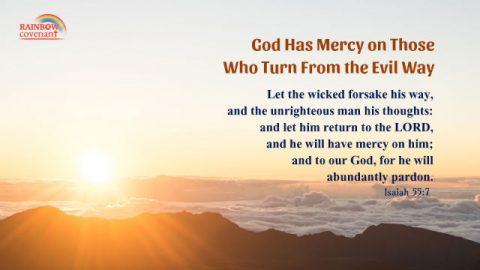 12 Bible Verses About Mercy: Learn About God’s Mercy and Love 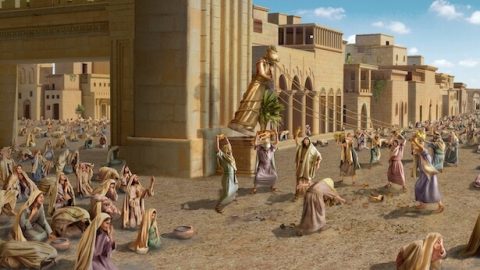 If Your Belief in God Is True, You Will Receive His Care Often

Is God’s Disposition Only Mercy and Lovingkindness?
Hanxiao Many Christians believe that the Lord Jesus’ disposition is mercy and lovingkindness. He never unleashes His wrath to people, but instead He t…

God Razed Sodom With Fire. A Commentary on Genesis 19:24–25
Then the LORD rained on Sodom and on Gomorrah brimstone and fire from the LORD out of heaven; And he overthrew those cities, and all the plain, and al…

Knowing Jesus Christ: The Lord Jesus’ Disposition Is Not Just Merciful and Loving
By Lanlan Whenever we talk of the Lord Jesus, we all think of His abundant love for us; He personally came into the world to redeem mankind and was a…