But woe to you, scribes and Pharisees, hypocrites! for you shut up the kingdom of heaven against men: for you neither go in yourselves, neither suffer you them that are entering to go in.

In people’s minds the Pharisees were devout servants to God, and they were the most trustworthy religious leaders. However, when the Lord Jesus came to carry out His work, the God-resisting nature of the Pharisees was revealed. It was these Pharisees who frantically resisted and condemned the work of the Lord Jesus. They fabricated all kinds of rumors and bore false witness to deceive the common people: They said that the Lord Jesus was deceiving all under heaven, that He cast out demons through Beelzebub, the prince of the demons. And once the Lord Jesus was resurrected three days after being nailed to the cross, they bribed soldiers to spread rumors about the Lord Jesus’ body being stolen away by His disciples. The Pharisees fabricated all kinds of lies and used all the tricks at their disposal to block people from seeking out and inspecting the true way. Their goal was to suppress the work of God so that they could forever hold dominion over God’s chosen people. Although they appeared devout on the outside, in essence they hated the truth and were antichrists who stood as enemies to God. It’s just like what the Lord Jesus said when He exposed and condemned them: “You serpents, you generation of vipers, how can you escape the damnation of hell?” (Matthew 23:33).

Why Did the Pharisees Resist Jesus the Messiah? 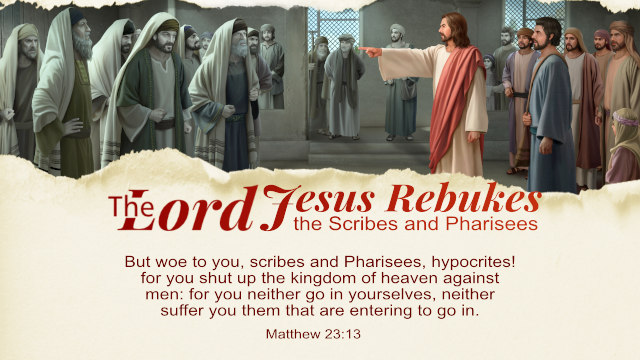 Beware of the Leaven of the Pharisees
Previous A Submissive Prayer—A Commentary on Matthew 26:39
Next Entertain Strangers With Love. A Commentary on Hebrews 13:2

Then Jesus said to them, Take heed and beware of the leaven of the Pharisees and of the Sadducees. Matthew 16:6 Thoughts on Today’s Verse… The Lord …

Why are the "Eastern Lightning" opposed and condemned by the religious world?

As those true believers in the Lord return to God’s family by the thousands, the spread of God’s work in the last days has gradually reached its climax.

No matter how they disrupted me, I would always stand by God’s side and stand witness for Him.

By Li Qingming A couple of days ago, I saw the following scriptures: “But the chief priests and elders persuaded the multitude that they should ask B…