Peter said to them, Repent, and be baptized every one of you in the name of Jesus Christ for the remission of sins, and you shall receive the gift of the Holy Ghost. - Acts 2:38

Peter said to them, Repent, and be baptized every one of you in the name of Jesus Christ for the remission of sins, and you shall receive the gift of the Holy Ghost.

These words of Peter remind those who do not follow Jesus that: Repent, and be baptized in the name of Jesus Christ, their sins will be forgiven and they can gain God’s guidance.

The Old Testament recorded that people who kept the law became increasingly corrupt at the end of the Age of Law, to the extent that they had no enough sin offerings to atone, and even offered up blind and lame cattle, sheep and pigeons for God. People of that age no longer upheld the law because of the bondage of sins and they were all in danger of being condemned to death for breaking the law. God loves mankind, and He couldn’t bear to see them live under the domain of Satan and be condemned to death for breaking the law, so He was incarnated as the Lord Jesus to save people. The Bible said: “Jesus came into Galilee, preaching the gospel of the kingdom of God, And saying, The time is fulfilled, and the kingdom of God is at hand: repent you, and believe the gospel” (Mark 1:14-15). Jesus Christ had brought the gospel of repentance to people under the law.

For two thousand years, as long as we accept Jesus’ gospel and pray in His name, we will gain His salvation and be redeemed. We no longer stray from Him because of sins. And Satan can’t accuse us because God has redeemed us from the domain of Satan and became our sin offering. Those who accept the gospel of Jesus all obtain the Holy Spirit’s work, living in the peace and joy and enjoying the abundant grace bestowed by Him. However, the Pharisees not only rejected Jesus’ gospel but also resisted Him to preach the gospel of the kingdom of heaven, so that they were denounced with the “Seven Woes” by Jesus and suffered God’s righteous punishment.

It is written in Revelation 14:6: “And I saw another angel fly in the middle of heaven, having the everlasting gospel to preach to them that dwell on the earth, and to every nation, and kindred, and tongue, and people.” It can be seen that there is the everlasting gospel to spread to people in the last days. Peter pointed out that only those who accepted the gospel of repentance could have God’s presence. The same goes for the people in the last days, only if we accept the everlasting gospel can we follow God’s footsteps and gain His guidance. This directly touches upon whether we can be saved and enter the heavenly kingdom.

The True Meaning of “the Resurrection of the Dead” 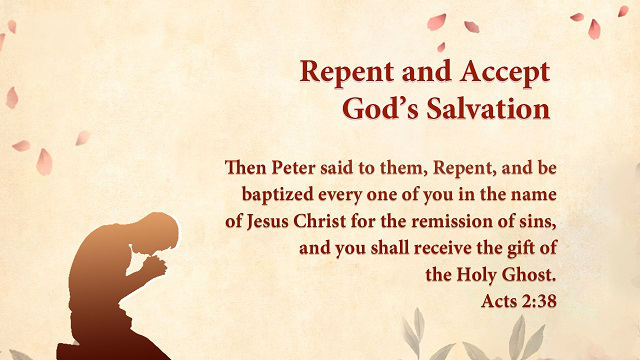 In the midst of trials, even when you don’t know what God wants to do and what work He wants to accomplish, you should know that God’s intentions for mankind are always good.

Today's Bible verse is Mark 9:23. This verse tells us all thins are possible if you believe. You can get the solution in everything if you have faith in God.

Knowing God’s Unoffendable Disposition From His Flooding the World. A Commentary on Genesis 6:13

And God said to Noah, The end of all flesh is come before me; for the earth is filled with violence through them; and, behold, I will destroy them wit…

For I know that in me (that is, in my flesh,) dwells no good thing: for to will is present with me; but how to perform that which is good I find not. …