Why Did the Lord Jesus Come to Work Among Man in an Ordinary Image?

I am a pastor. I have preached and worked for the Lord for years, but a puzzle constantly remained in my heart: Why did the Lord Jesus come to work among man in the image of an ordinary person? Many people, just because of His ordinary appearance, denied that He is God Himself, and regarded Him as an ordinary person. Especially the chief priests, scribes and Pharisees not only didn’t treat the Lord Jesus as God, but judged Him as the son of a poor carpenter and smeared Him, by saying that He healed the sick and cast out demons by the prince of the devils. They did their utmost to deny that the Lord Jesus is God Himself. I couldn’t help but ask myself: How would I treat Him if I lived in that age? Would I measure and deny the Lord Jesus according to His ordinariness like them? Thinking of this, I felt hesitant. Then considering carefully: That today I can accept the Lord Jesus as my Savior is because His redemptive work has been accomplished and His holy name has been widely testified. If I were born in the time that the Lord Jesus came to carry out His work, I would have probably resisted Him due to His ordinary appearance like the Pharisees at that time. What puzzled me was: God is so supreme, so why did He take such an ordinary image to work among man? If He was born into an imperial family, with an exalted image and a great man’s demeanor, then wouldn’t He be easy for people to accept? This question continued to puzzle me for a long time.

Hard as I pondered on this question, I still couldn’t understand. I had searched the Bible many times, and also consulted many books. Through reading verses, seeking and praying, I knew it was meaningful that the Lord Jesus worked among mankind in an ordinary image. I saw the Bible recorded that the three Magi imagined that the Messiah would be born in the royal palace, while they were unable to find the newborn Lord Jesus there. Instead the Lord Jesus was born in a manger, came from a carpenter’s family in Bethlehem of Judah, and wore a common person’s appearance. God is so lofty but assumes the form of a common human. It can be seen that the substance of God is humble and hidden. He does not stand in His position and never exhibits Himself to let others worship Him. But we are quite vain. We only care about people’s external appearances and admire great figures, but don’t pay attention to knowing God’s substance or the aspect of His beauty and goodness. Just think: If the Lord Jesus was born in a royal palace, as people thought, with a lofty and great image, what would everyone do? Those Jewish people, scribes and Pharisees who resisted God wouldn’t do so because of His ordinary image. On the contrary, they would definitely follow Him. Then how could their substance of hypocrisy and resistance to God be revealed? While those lowly people might deem that God was unreachable because of His great image and high status. Then it wouldn’t be easy for those common people to approach God or receive His salvation. 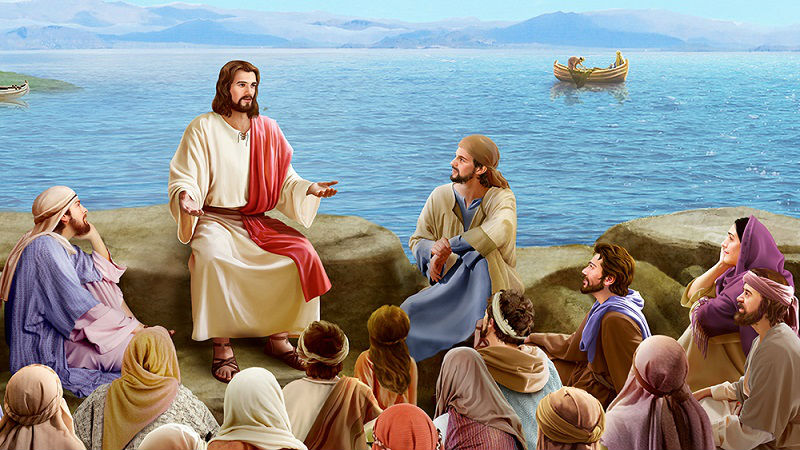 At this point, I realized that there is God’s wisdom hidden behind the Lord Jesus working among man in an ordinary image. Because God looks upon the entire earth, He knows that a large amount of people believe in Him, but only a small group of them truly believe in Him and long for the truth. Thus God appears in the form of an ordinary man. In this way, all the people who truly believe in God and thirst for the truth can be chosen and saved. The Lord Jesus said, “My sheep hear my voice, and I know them, and they follow me” (John 10:27). Those disciples and people who truly believed in God and thirsted for the truth, such as Peter, John, Andrew, Nathanael and so on, recognized His voice and returned to the Lord on account of hearing His way. For those who didn’t truly believe in God or long for the truth, the Holy Spirit wouldn’t work in them. They were the ones who were eliminated by the work of the Lord Jesus, just like the earliest Pharisees. God worked in that way, which really revealed everyone. Because at each stage of His work, what He wants are people who can seek and long for the truth, and who can keep up with the work of the Holy Spirit. Those who neither seek the truth nor keep up with the work of the Holy Spirit are all eliminated. In this way, these two types of people—the good and the evil—can easily be separated, which is God’s wisdom.

After understanding these, I feel enlightened. The Lord Jesus Christ came to work in an ordinary image, which allows us to have a knowledge of His humble and hidden essence, brings us closer to God, lets us receive the provision and shepherding of the truth from His words, and moreover reveals those who don’t love truth but define God based on His appearance and are full of vague ideas about Him. We know no matter how God works, it contains His will and wisdom. After seeking and understanding this aspect of the truth, I must draw lessons from the Pharisees, and can’t judge whether the Lord Jesus Christ is God Himself by His appearance; instead I should learn from Peter and Nathanael, paying attention to distinguishing whether the Lord’s words are God’s voice. Only in this way will I not make the mistake of condemning and resisting God.

Thank God for His enlightenment. All the glory be to our Father in heaven!

By Liu Ruochen, China In chapter 3, verses 13-17 of Matthew, they read: “Then comes Jesus from Galilee to Jordan to John, to be baptized of him. But J…

Why did the Jews long for the Messiah but resist the coming of Jesus Christ? Christians need to know 3 root problems to avoid making the same mistake when meeting the second coming of Jesus in the end times.

By Zheng Xi Zheng Xi and her husband, Xin Yu, were reading the Bible at home. When she read this verse: “And see a voice from heaven, saying, This is …

When Jesus did His work, He spoke many parables to His followers. Then, what was Jesus’ will when He spoke parables?
9:18