What Can We Learn From the Jerusalem Temple Being Destroyed?

Early on in my spiritual formation, I read this passage in the Bible, “And when he was come near, he beheld the city, and wept over it, Saying, If you had known, even you, at least in this your day, the things which belong to your peace! but now they are hid from your eyes. For the days shall come on you, that your enemies shall cast a trench about you, and compass you round, and keep you in on every side, And shall lay you even with the ground, and your children within you; and they shall not leave in you one stone on another; because you knew not the time of your visitation. And he went into the temple, and began to cast out them that sold therein, and them that bought; Saying to them, It is written, My house is the house of prayer: but you have made it a den of thieves. And he taught daily in the temple. But the chief priests and the scribes and the chief of the people sought to destroy him, And could not find what they might do: for all the people were very attentive to hear him” (Luke 19:41-48). After reading this passage, I couldn’t help but remember the tragedy of the destruction of the temple in Jerusalem two thousand years ago: In 70 AD, General Titus of Rome attacked Jerusalem with the Roman army, the temple was burned, and the Israelites were slaughtered by Roman soldiers. Did this not fulfill the prophecy in this passage? 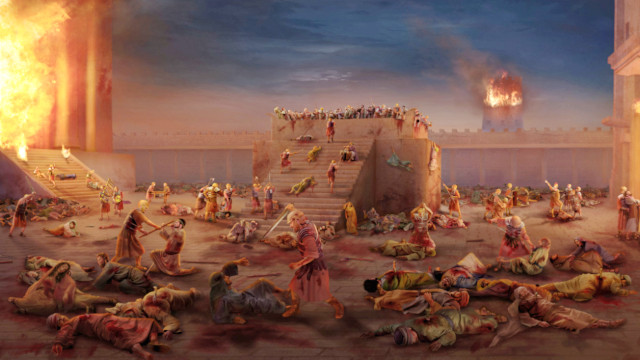 Actually, before the Lord Jesus became incarnate to do His work, the temple had already become desolate and “collapsed.” The primary reason is that these Jewish leaders did not obey Jehovah’s commandments, but instead deviated from God’s way, and used the traditions and rules of the ancients to instruct people in all things, in ways such as “Wash your hands carefully or you can’t eat, and you may not eat either if you do not bathe after coming from the market.” They followed these traditions and rules of ancient people as God’s word. On most days, they stood up high in their pulpits, explaining the laws to the people, making long prayers, and even writing scriptures on the tassels of their robes, to make others see that they were godly. However, their hearts were filled with evil. Not only did they murder the prophets sent by Jehovah, they also devoured widows’ property, so God said: “This people honors me with their lips, but their heart is far from me” (Mark 7:6). “Woe to you, scribes and Pharisees, hypocrites! for you are like to white washed sepulchers, which indeed appear beautiful outward, but are within full of dead men’s bones, and of all uncleanness” (Matthew 23:27). The Holy Spirit had already forsaken them, so when they turned the temple into a place to buy and sell cattle, sheep, and pigeons and exchange money, and even into a nest of thieves, there was none of the Holy Spirit’s discipline. Without the work of the Holy Spirit, the temple had already lost its value and significance.

Especially when the Lord Jesus began to work, the Pharisees refused to seek or examine the Lord’s sermons. Instead, to preserve their status and positions, they invented all kinds of lies and unscrupulously condemned and resisted the Lord Jesus, and also incited the people to reject the Lord. They even colluded with the Roman government and crucified the benevolent Lord. It is obvious that these Jewish leaders are hypocrites. They may have served God, but they were actually antichrists who resisted God. How could the Lord Jesus, who was holy, preach in such a temple after He came?

Another reason is that the work of the Holy Spirit had moved, the incarnate Lord Jesus carried out His work to redeem mankind outside the temple, and God’s work progressed upon the basis of His work in the Age of Law. The Lord Jesus began the Age of Grace and concluded the Age of Law. Those who accepted the Lord Jesus’ work of redemption, such as Peter and John, gained the work of the Holy Spirit, had a new path of practice, and received God’s salvation. But the Pharisees who still remained in the temple, and rejected, defied, and condemned the Lord were naturally abandoned by God’s work, and could only fall into darkness and desolation as they spent their days by the altar.

Having said that, I can’t help but think that my own church is desolate to the point where my brothers and sisters fall asleep during the gatherings. Many people still use the church as a place to buy and sell, to promote products, to gather and talk about business opportunities, and some of our pastors and elders have no fear of God in their hearts. They use the church as a place of exchange for profit-seeking and gaining money, a platform to squabble and fight for their own interests. When they preach, they also deconstructed the Lord’s words according to their own meanings. They even obey Paul’s words as if they were God’s, using the words of man to nullify God’s words. They do not in the slightest fellowship on any God’s practical will, and meetings are simply going through the motions, going through a process. They lost the work of the Holy Spirit long ago.

I have thought about the Lord Jesus’ words, and I know He will return again. Given the church’s desolation today, it is quite possible that the Lord has already returned. We must not sit and wait for death. We should seek the Holy Spirit’s work and follow in God’s footsteps, because God warned us, “My people, that you be not partakers of her sins, and that you receive not of her plagues” (Revelation 18:4). “These are they which follow the Lamb wherever he goes” (Revelation 14:4).

• How Do the Wise Virgins Hear the Voice of God and Welcome the Lord?

• If We Sit Around Waiting for God’s Revelation, Can We Welcome the Lord?

By Zheng Fu The story of Noah’s ark is very well-known. From the accounts in the Bible, we can see that the people in Noah’s day became depraved and …

What Does “It Is Finished” of Seven Last Words From the Cross Mean?

By Xiang’ai There was a knock at the door. When opening the door, Huimin saw her mother, Wang Xue. She said gladly: “Mom, what brings you here?” Li…

By Xiaoding Such an incident is recorded in Acts in the Bible: Around A.D. 35, under the Holy Spirit’s guidance, the apostles of the Lord Jesus preac…

By Si’en Brothers and Sisters, Thanks be to God for giving us the opportunity to fellowship together. I’m certain the Ten Commandments are a famili…
9:18