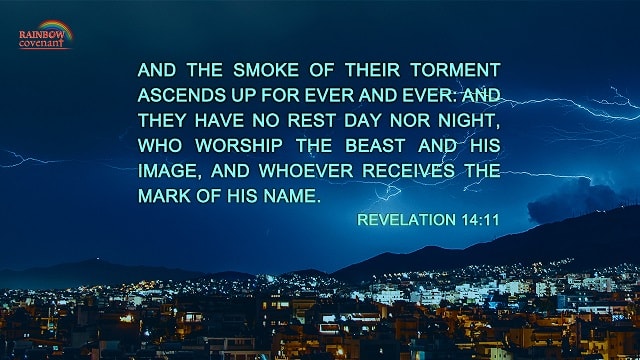 Bible Prophecy about Mark of the Beast

Here are the Bible prophecy about the Mark of the Beast to help us understand God’s requirements, watch our footsteps and avoid being punished.

You are welcome to use our Bible Verses By Topics page to quickly find verses about popular topics.

And the third angel followed them, saying with a loud voice, If any man worship the beast and his image, and receive his mark in his forehead, or in his hand, The same shall drink of the wine of the wrath of God, which is poured out without mixture into the cup of his indignation; and he shall be tormented with fire and brimstone in the presence of the holy angels, and in the presence of the Lamb: And the smoke of their torment ascends up for ever and ever: and they have no rest day nor night, who worship the beast and his image, and whoever receives the mark of his name.

And the first went, and poured out his vial on the earth; and there fell a noisome and grievous sore on the men which had the mark of the beast, and on them which worshipped his image.

And the beast was taken, and with him the false prophet that worked miracles before him, with which he deceived them that had received the mark of the beast, and them that worshipped his image. These both were cast alive into a lake of fire burning with brimstone.

And I saw thrones, and they sat on them, and judgment was given to them: and I saw the souls of them that were beheaded for the witness of Jesus, and for the word of God, and which had not worshipped the beast, neither his image, neither had received his mark on their foreheads, or in their hands; and they lived and reigned with Christ a thousand years.

In the course of our following God, how can we admonish ourselves and be qualified believers of God? Related articles: Reflect: I, Qualified Christian?

Defend the Truth with Life | Gospel Film "Honor and Dishonor"

Jiang Ming is a preacher of the Church of Almighty God. In her thirteen years of preaching the gospel, she suffered exclusion and revilement from the …

How Should We Treat Bible Prophecies in Line With God’s Will?

By Wang Wei The Bible says: “Knowing this first, that no prophecy of the scripture is of any private interpretation. For the prophecy came not in old…

By Song Tao Reading the Scriptures Got Me to Reflect “For to us a child is born, to us a son is given: and the government shall be on His shoulder: an…
9:18