And God saw their works, that they turned from their evil way; and God repented of the evil, that he had said that he would do to them; and he did it not.

God Calms His Anger Because of True Repentance of the Ninevites

“Although God changed His mind, there was nothing complex about His frame of mind. He simply went from expressing His anger to calming His anger, and then decided not to bring the catastrophe upon the city of Nineveh. The reason why God’s decision—to spare the Ninevites from the catastrophe—was so swift is that God observed the heart of every person of Nineveh. He saw what they held in the depths of their hearts: their sincere confession and repentance for their sins, their sincere belief in Him, their deep sense of how their wicked acts had enraged His disposition, and the resulting fear of Jehovah God’s impending punishment. At the same time, Jehovah God also heard the prayers from the depths of their hearts entreating Him to cease His anger against them so that they might avoid this catastrophe. When God observed all these facts, little by little His anger disappeared. Regardless of how great His anger had previously been, when He saw the sincere repentance in the depths of these people’s hearts His heart was touched by this, and so He could not bear to bring the catastrophe upon them, and He ceased to be angry at them. Instead He continued to extend His mercy and tolerance toward them and continued to guide and supply them.”

God’s change of attitude toward man was due to a change in man’s attitude toward Him. It is the last days now, God is waiting for us to truly repent. As it is recorded in the Bible: “holiness, without which no man shall see the Lord” (Hebrews 12:14). Although the Lord Jesus was crucified and has redeemed us mankind from sin, still we are defiled all over, living in the condition of committing sins and confessing sins. In this way, how can we receive God’s salvation and enter the kingdom? God is holy, He only allows holy men to enter into God’s kingdom. So, now only if we cease to do evil and commit sins like the people of Nineveh, and act in accordance with God’s requirements and sincerely repent to God, can we be saved and survive. More articles about getting rid of sin, please click. 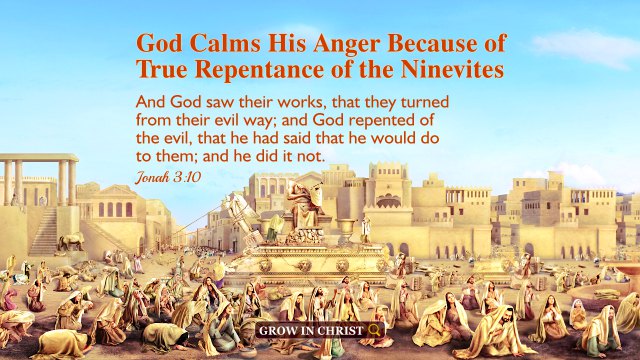 Previous God’s Command to Man—A Commentary on Genesis 2:16–17
Next True Repentance of the King of Nineveh

And in their mouth was found no guile: for they are without fault before the throne of God. - Revelation 14:5 Thoughts on Today’s Verse… This verse tells us the behavior of those who follow the footprints of the Lamb. This group of people are honest and beloved by God. No lie or crookedness or […]

How to Remove the Beam Out of Our Eyes—A Commentary on Matthew 7:3-5

The Meaning of the Parable of the Vine and Branches—A Commentary on John 15:5

I am the vine, you are the branches: He that stays in me, and I in him, the same brings forth much fruit: for without me you can do nothing. John 15:5 Thoughts on Today’s Verse… The Lord compared us to the branches and compared Himself to the vine. Our relationship with the Lord is […]

Those Who Fear Jehovah God Walk in Their Uprightness

He that walks in his uprightness fears the LORD: but he that is perverse in his ways despises him. Proverbs 14:2 Thoughts on Today’s Verse… Different people hold different attitudes toward God. Those who truly believe in God can come before God, they fear God and shun evil, never pass judgment on Him but seek […]